As Shadow Minister for Public Health, Sharon responded to a debate regarding the Valproate scandal and the cover up of the effects of this drug on pregnant women and their unborn children. In her speech, Sharon called for more to be done for the families affected through compensation, raising awareness and also conducting a public inquiry to get to the bottom of why this happened. 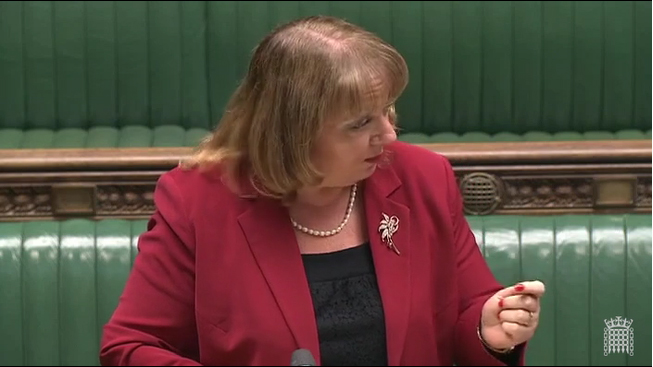 You can read Sharon's speech pasted below.

It really is an honour to be responding for the second time in this Chamber today on behalf of the Opposition.

First, I thank the right hon. Member for North Norfolk (Norman Lamb) for securing this very important debate. It really was much needed so that we could finally discuss in detail, and in the main Chamber, the issues around valproate and what the Government must do to address this injustice. He spoke with passion and obvious outrage on behalf of the thousands of women and children affected by this disgraceful scandal.

I, too, want to thank other hon. Members who have taken part in this debate, including the hon. Members for Congleton (Fiona Bruce) and for Eastleigh (Mims Davies), and my hon. Friends the Members for Newport West (Paul Flynn) and for Heywood and Middleton (Liz McInnes). My hon. Friend the Member for Bury North (James Frith) gave an extremely moving account of how the drug helped him as a young boy, making the point that, when used correctly, it can be a very good drug. We also heard contributions from the hon. Member for Strangford (Jim Shannon), my hon. Friend the Member for Lancaster and Fleetwood (Cat Smith) and the hon. Member for Central Ayrshire (Dr Whitford) who speaks for the Scottish National party. It has been a very good debate.

As we have heard, the issues of valproate and its effects on foetuses are not new. In fact, they span a significant number of years, going as far back as the 1970s and 1980s when the first cases of the effects of valproate were documented. Even recent scientific research has shown that valproate can have an impact on a child’s life, including a study finding that 10% of children exposed to valproate will be born with a major congenital malformation, with 29% requiring additional educational support and 6% being diagnosed with significant social communication difficulties, such as autism.

Although there has been some movement on making women aware of the risks of valproate during pregnancy through the valproate toolkit, there is still far more that should and must be done to support these women and their children who have been so seriously affected by this injustice. The scope of this issue is serious. Data from 2010 show that more than 21,500 women were prescribed valproate. Although not all those women will have become pregnant, or planned to become pregnant, it is worrying that, following the toolkit’s publication, there is still not enough awareness of the risks, with 85% of patients not receiving the booklet and 90% not receiving the pharmacist’s card. It is important that the Minister looks into this matter urgently and ensures that awareness is increased to help to address the lack of knowledge. That could save so many innocent lives from being irreparably damaged.

As part of that, will the Minister be minded to agree that the NHS should make it mandatory for every clinician prescribing sodium valproate to a woman or girl of childbearing age to have a conversation with her about risks during pregnancy, upon first prescribing the drug and at least yearly, before her prescription is renewed?​

Over the decades there have been countless opportunities for this drug to be investigated, especially when evidence from the 1980s grew. Yet the various regulatory bodies for medicines have failed to keep their eyes on it as an issue worthy of investigation, with only fleeting references in position papers and reports, and nothing substantial. This is why it is welcome that the European Medicines Agency, in one of its first public inquiries, on 26 September 2017 called together patients, carers, doctors, pharmacists and academics to look into the matter further. It will be interesting to see the outcomes of its investigation when it concludes.

We have a duty to set the mistakes or oversights of previous Governments right, which is why we are here today—to seek justice for the victims of sodium valproate in pregnancy and their families. The Opposition welcome calls for the Government to look into how they can compensate the families who have been so significantly affected.

It must be noted that, as others have said, the drug is an effective treatment. For many it may be the only drug that works for them. Nevertheless, there is a systematic failure to inform women of the dangers of taking valproate. If expectant mothers had had the risks laid out clearly for them, many children would not have been harmed, and I hazard a guess that we would not be debating this issue today.

For those reasons Labour promised, in our election manifesto earlier this year, that we would look into this further by holding a public inquiry if we won the general election. We now make a plea to the Government. The evidence collected by In-FACT shows that despite the Government, pharmaceutical companies and regulatory bodies knowing about the risks for 40 years, that knowledge was withheld from women, which meant they were unable to make informed decisions about their drug treatment during pregnancy. I must ask the Minister: why have we not got to the bottom of this injustice, and is it not about time that we did?

A lot of the issues that we must understand and investigate are historic, yet for some they are still very prominent in their present. Many families are living with the repercussions of not being given the relevant information.

Hon. Members may have watched “Victoria Derbyshire” in recent months, on which valproate has been discussed, including last month when Deborah Mann, who took valproate during her pregnancy, discussed how the drug had affected her daughter, Branwen. Deborah had been given a dose of valproate of 5,000 mg, five times higher than the recommended daily dose of 1,000 mg. Any dose above 1,000 mg is considered to have the largest level of risk. Branwen has had to wear splints every day since she was a little girl. She is in chronic pain every day. She has migraines and problems with her brain and eyes. At just 22, Branwen has been told that she could go blind, have a stroke or even die at any moment.

I recently met the inspirational Janet Williams and Emma Murphy, who a number of hon. Members on both sides of the House have paid tribute to. I now realise that they are in the Public Gallery. They set up In-FACT in November 2012 after two of Janet’s children and five of Emma’s children were diagnosed with foetal anticonvulsant syndrome. We heard in detail from the hon. Member for Congleton the extent of the appalling damage to Emma and Janet’s precious children, and all ​of it was preventable. Both Janet and Emma campaign tirelessly after being told—in the case of Emma, time after time after time—that these drugs were safe to take in pregnancy. These women did ask the obvious questions when the truth was already well known, and they were still told that these drugs were safe to take while they were pregnant. Can hon. Members imagine how that feels? As a mum, I would be absolutely furious—we all would. I would want answers. I would want justice, and so do Janet and Emma.

It is approximated that, since 1973, 7,000 children have been harmed by exposure to valproate. No doubt there will be many other families who have failed to conceive or who have had stillbirths or miscarriages—all because of this drug. That is why we must get answers, but it is also why we must look at what compensation we can give these families because of the failure of the NHS to protect and support them. The idea of compensation has been established by our neighbours across the channel, where the French Parliament has recognised the true scale of this injustice and established a fund worth €10 million to support the victims of valproate and their families.

Opposition Members believe that mistakes should be recognised, addressed and accordingly compensated for. We also believe that burying our heads in the sand and ignoring the demands of the victims goes against the nature of justice and righting the many wrongs of the past. These families must be supported and allowed to have a full investigation into the failures and damage they have had inflicted on them.

The Minister cannot ignore the scale of this tragedy and the numbers of people who have had their lives so adversely affected not through any fault of their own, but due to medication they were prescribed by the NHS. We are here today to ensure that the Government wake up to the enormity of this scandal and take immediate action.

More must be done to make women aware of the risks of taking valproate during pregnancy, and to ensure that the injustice that has gone on for far too long is righted, with answers found and support provided to these families, who have seen their lives turned upside down because of what can only be described as a cover-up. The Minister should and must listen to what has been said today. I hope he will assure the House that he has constructively listened and that he will start the process of righting this pernicious wrong by holding a full public inquiry and properly supporting these families. They need, want and deserve justice. They should, at long last, receive nothing less.