In her capacity as Shadow Minister for Public Health, Sharon was invited to speak to a group of Socialist Health Association members in the North East about public health and prevention. In her speech, Sharon raised concerns over the progress of the Five Year Forward View's promise of a "radical upgrade in prevention and public health" and how the crisis and mismanagement the NHS is facing is currently not allowing this promise to be fulfilled. 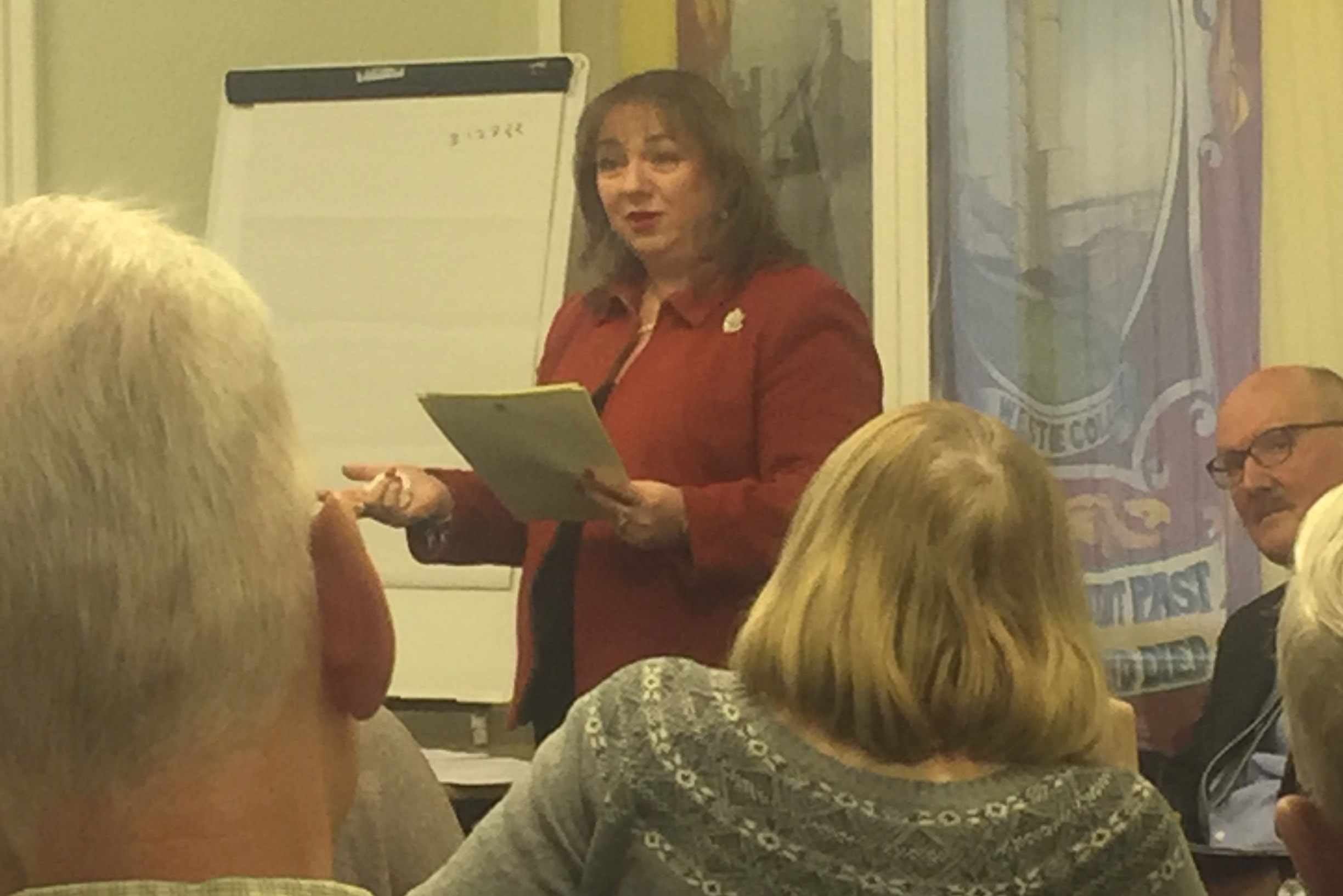 Thank you for inviting me to speak to you this morning.

The Socialist Health Association is an organisation of academic specialists, medical practitioners and those with health interests within the organisation, and I know that myself and the rest of the Shadow Health team greatly appreciate the work you do to support Labour’s approach to all matters related to health policy.

Health inequality is an issue which we continually need to work on to get right, especially here in the North, where it is well documented that our region and other northern regions have persistently poorer health than the rest of the country. This gap has widened over the last four decades.

Figures show this to be the case, with latest public health outcomes data showing that the North-East and the North-West have the lowest life expectancy compared to London and the South-East, which have the highest.

It was highlighted in the Due North report that since 1965, there have been 1.5 million excess premature deaths in the North due to the disparity in health outcomes.

This is something that cannot be ignored.

This shows what we all know to be true: people in the more deprived areas of the country do not live as long as those in more affluent areas.

This is exacerbated by the fact that those short lives can also be unhealthy lives. Long-term health conditions, cancer prevalence, and addictions are all far more common in more deprived areas of the country.

It is not only the health of people which is affected by health inequalities, but also there is an economic argument to be made too. In England, as a whole, the cost to the NHS of treating illnesses and diseases arising from health inequalities is estimated at £5.5 billion a year, and ill-health means a loss to industry of £31 to £33 billion each year in productivity.

If we are to improve health outcomes and reduce health inequalities in our region, and indeed across the country where there are pockets of persistent inequality, then it is important that we look at how our health and social services are working now and how we need to ensure services are working towards improving the health of our nation, especially through prevention.

It goes without saying that this winter saw our NHS face unprecedented challenges which has pushed it virtually to the brink.

There are countless stories in the media about the pressures the NHS is facing, and sadly, the Government have buried their heads in the sand and acted as if the issue isn’t as bad as it is in reality.

Whilst we are seeing the NHS facing a crisis, we are also seeing yet another reorganisation of services at a local level through Sustainability and Transformation Plans (STPs).

Whilst in principle, the idea of improving integrated services through STPs is a welcome idea, there are real and perceived concerns on the ground – not just here in the North, but across the country – that the efficiency savings are all about cuts, rather than improving clinical services for patients.

Pair all of this with the pressures in adult social care services, which saw a cut in funding of £4.6 billion in the last Parliament and experts warning there is an expected £1.9 billion funding gap in social care this year alone, then there is no wonder why there is no ability to seriously address health outcomes and inequalities.

Even in my own area of policy – public health - we are beginning to see what could be a crisis.

Whilst the total spend on public health is just over 4% of GDP, the then Chancellor in 2015, announced a £200 million in-year cut to the pot of money, and then in the Autumn Statement announced an average, real-terms cut of 3.9% until 2020.

Even though the Government has ring-fenced this money when it reaches local authorities, there is no guarantee it will continue in the next spending round in 2018.

It is hypothetical what will happen, but when local authorities are strapped for cash already, if the ring fence is removed, there is a real concern that those councils with difficult decisions to make may take from this budget to plug other areas.

This can in some way be backed by current figures on the cuts we are seeing to public health services, as reported in the Health Select Committee’s report: Public Health, post-2013, where they cited figures by the Association of Directors of Public Health.

What we are seeing in the NHS, social care and public health is a complete mismanagement and lack of commitment to fund these important services properly.

This is something I have raised with Health Ministers across the House of Commons: if you cut from one area in the health and social care service, you will see a knock on affect in others.

This has unsurprisingly been met with disregard from ministers who fail to recognise the impact their mismanagement is having on these vital services and the health of the country.

It must be remembered, that for a region – such as our own – where ill-health and health inequalities are clearly apparent that this approach to our health services will have a serious impact on regions which are already at the lower end of the spectrum of dealing with health problems.

Yet, also this approach, especially to public health, goes completely against NHS England’s Five Year Forward View, which promised: “a radical upgrade in prevention and public health” and the Prime Minister’s own commitment to reduce health inequalities when she took office.

It is clear that the radical upgrade and desire to address these issues are not being met. In fact, it could be described as going backwards, or at best, staying still. Neither option is a welcome one.

However, if we remember the state of the NHS currently, which is fighting crisis after crisis every day, then it is not surprising that this worthy commitment to prevention and reducing health inequalities is not being worked towards.

How do we address this?

What we need to see is this radical upgrade made a central theme to any approach to improve services and not see them cut to the bone.

For me, improving the health of our nation is not just a health priority but a social justice one as well.

To do this, the NHS needs to bring forward a new funding settlement for the NHS and social care in the upcoming Budget, which will not only give the NHS the vital funding it needs to deal with increasing pressures, but also in order that it can begin to achieve its vision of radically upgrading prevention and public health as called for in the Five Year Forward View.

This should also include a rethink on the current approach to public health – the false economy of reducing funding when pressures remain the same, or increased, shows a complete lack of joined up thinking by the Government. And this is something I will push them to rethink at every available opportunity that I have as Labour’s Shadow Minister for Public Health.

It seems illogical to me that you cut prevention budgets, which will just present problems further down river in the NHS which as we know is already facing difficulties when coping with the demands it has now.

However, it cannot all be about funding. Labour’s approach at the last General Election was two-fold: one, ensuring interventions happen when necessary, especially at younger ages to correct bad habits which could lead to ill-health in adulthood, and second, ensuring that adults have the tools in their arsenal to make healthy lifestyle choices to live fulfilling lives.

This is something that I hope to continue to build upon in my time as Labour’s spokesperson on public health and ensure that any policies we propose will help seriously shift us away from the current situation where persistent health inequalities remain the norm.

To end, health inequalities are a serious issue that cannot be ignored. Reports after reports have shown that we have not made many serious inroads into health inequalities, and that is why it calls for a radical approach which doesn’t weaken the already fragile state of affairs we are seeing.

With innovation and political will, we can ensure the gap in health inequalities shrinks and health outcomes improve. To do this, we need that step change in ethos called for in the Five Year Forward View towards prevention but an NHS which itself is healthy enough to seriously begin to work towards this vision – if that does not happen, then it will never be achieved.

I hope in the discussions that we can start the process of doing just that, and I hope that you will all feed your thoughts and ideas into the Health and Social Care Commission.

NHS Health Speeches Save our NHS