As Member and former Chair of the All-Party Parliamentary Group on Basketball, Sharon spoke in a Westminster Hall Debate on the Future of Basketball. In her speech, Sharon raised the issue of lack of funding for Basketball.

You can read the full debate here: UK Basketball

It is a pleasure to serve under your chairmanship, Mr Bailey. I thank my hon. Friend the Member for Leeds North West (Alex Sobel) for securing this important debate, and for his excellent and entertaining speech; I do not think that we have heard rap quoted in here before. He recently took over from me as co-chair of the all-party parliamentary group on basketball, and he is doing a sterling job; he has already done a lot more in that short time than I hoped to do to raise the profile of basketball in Parliament, and this debate is an excellent opportunity to do so.

I have always loved basketball. I know that I do not look like a basketball player—we have lots of them in the Public Gallery—but I played in high school, and I still love to watch the sport; I know that that is hard to believe. I always hoped that through the work of the all-party group, one day the sport would be as large as others, even football, and that it would be everywhere: on our TVs, on the news channels, in our local communities and in our international sports arenas. However, that cannot be achieved unless basketball receives fair and sustainable funding so the sport can grow from the grassroots up.

Basketball is the second most popular sport behind football for 11 to 15-year-olds. According to the Department for Digital, Culture, Media and Sport, it is more popular than riding a bike, so why does the funding stay so low? All young people could benefit from basketball as a sport. It gets them active, but as shown in the results of the all-party group’s 2014 inquiry, which I chaired, it can also serve as a great tool for representation and aspiration, especially among children from deprived communities.

Basketball is perceived as very cool, and it is. It has street credibility globally, and due to its strong affinity with music and lifestyle, it is a sport that can resonate with young people. It can be played with very little space, equipment and money, making it truly representative. More than 300,000 young people aged 16 and over play basketball at least twice a week. It appeals to men, women, boys and girls—one in six participants are female—and is popular among players from less wealthy backgrounds. Somewhat uniquely, basketball is the only team sport in which more than half of registered members—58% of adult basketball participants—are ​from black and minority ethnic backgrounds. That is followed by cricket, which is still some way behind at about 30%.

We have all plugged our local teams. My local team, the Newcastle Eagles, are absolutely amazing. I do not wish to gloat or be biased, but allow me to remind Members that they are the top team in the British Basketball League, having won the BBL championship seven times and the BBL cup six times. I was there for some of those games, cheering them on. Not only are the Newcastle Eagles a fantastic team, they do so much work for the local community and hold partnerships with Northumbria University. Little Dribblers, Mini Eagles, Hoops 4 Health and the School of Excellence are just some examples of what the Eagles Community Foundation, launched in 2006, helps to do for the local community. The primary school programme Hoops 4 Health works with 7,000 young people every year, encouraging them to play and get healthy. It is a great way to introduce children to the sport. They can also play in the Eagles’ central venue league on weekends. The Eagles are a great example of what all BBL clubs do, week in and week out.

Despite all that great work, since 2009, basketball nationally has received just £102 in funding per adult participant. That is less than half as much as the next highest comparable sport, netball, which receives £205. Why is that? I know that netball has its own attributes; I used to play when I was younger, although I preferred and was better at basketball. It is cooler, as well. Why must funding be shared so unfairly? Sport England’s February 2017 funding round awarded £4.73 million to Basketball England, and just £1 million to British Basketball. Wheelchair basketball funding was not announced until October 2017, when it received £300,000.

Based on Sport England’s active lives survey, just under 1% of the population—0.7%, to be exact—participated in basketball at least twice during the 28 days prior to the survey. Although that might seem like a small percentage, basketball placed 10th out of the top 25 sports by participation— only 8% of participation was in team sports—placing it ahead of other sports such as netball, rugby and hockey. [Interruption.] I will wind up, but before I do, I will make one point about funding. Those sports receive far more funding than basketball. Hockey receives more than £9 million in funding although only 0.3% of the population participate, meaning that hockey receives 50% more funding from Sport England than Basketball England, British Basketball and wheelchair basketball.

I had more that I wanted to say, but others want to participate, and I am being told to wind up, so I will leave it to the Minister to do the sums. I hope that she will consider what is being said today and fix the unfair funding, so that basketball becomes a national sport in this country.

Washington and Sunderland West MP Sharon Hodgson hosted a masterclass from Team GB basketball and wheelchair basketball stars on Wednesday 16th September during the return of the ‘Shoot Some Hoops’ event in Parliament to help promote the sport. 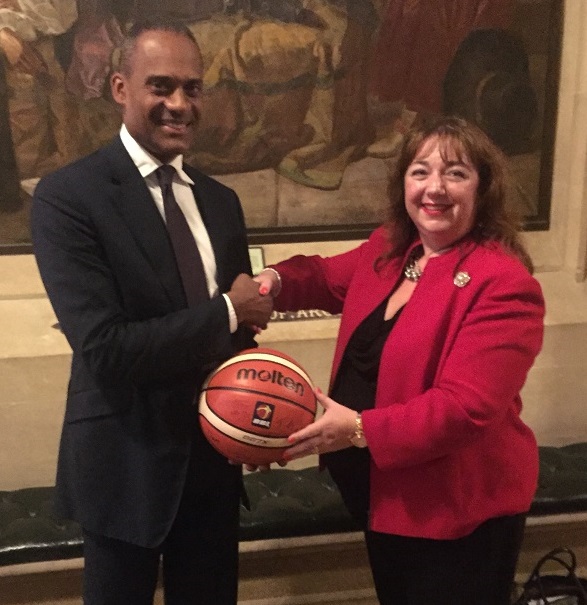 Sharon presenting the winner of the shoot off - Adam Afriyie, Member of Parliament for Windsor - with a signed basketball from Team GB after the "Shoot Some Hoops" event in parliament.