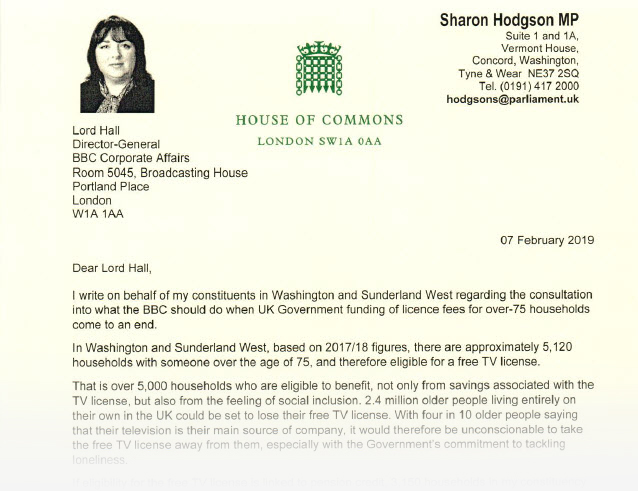 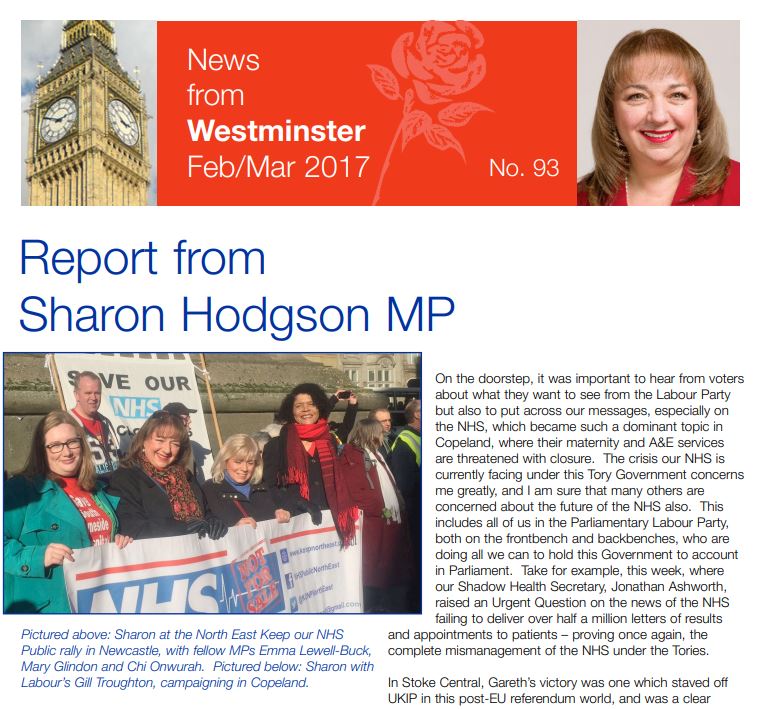 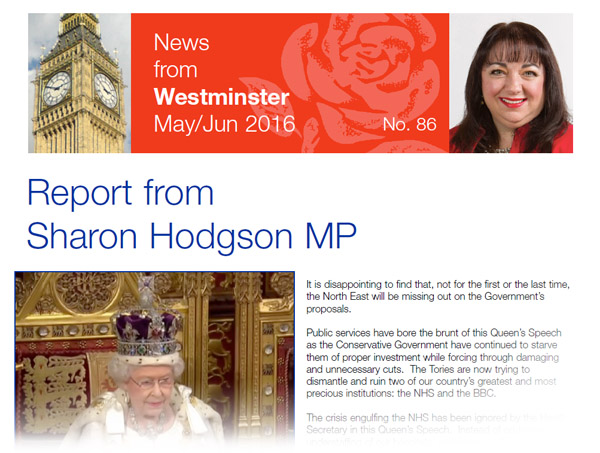 During the third allotted day for MPs to debate the legislative programme set out in the Queen's Speech, Sharon spoke about defending two of our country's most important public services: the NHS and the BBC.

I do not think the Chancellor heeded my words on the lack of measures for the north-east in his ultra-shambolic Budget back in April, when I warned him that, despite his ambition to be king of the north, he needed to recognise that there was a lot more of the north beyond Manchester before he got to the wall. Mercifully, his time as Chancellor is almost up. Who knows where ​he will be when winter comes, post-referendum: in No. 10 or in the wilderness on the Back Benches? His legacy for the north-east is, sadly, only more pain and hurt.

Today’s debate is all about our public services, and I want to highlight the damage that is being inflicted on them by this Conservative Government, who are continuing to starve them of proper investment while forcing through damaging and unnecessary legislation. The Tories are now trying to dismantle and ruin two of our country’s greatest and most precious institutions: the NHS and the BBC. These are two public services that we probably all use almost every day and both are central to our national way of life. This Government are hellbent on completely changing the culture and ethos of the two institutions. They have already started the process, but we must not let them complete it.

Since the Conservatives came into office in 2010, the NHS has faced crisis after crisis, all of which could have been avoided if it had been given proper investment and support. Instead, we saw an unnecessary top-down reorganisation of the NHS that disjointed funding streams and placed unnecessary burdens on services through cuts that have been detrimental to our constituents’ experiences of using the NHS. This abysmal mismanagement of the NHS by the Health Secretary and his equally appalling predecessor is compounded by the fact that 3.7 million people are currently on waiting lists, by the understaffing of our hospitals and by patients’ struggles to see their GP. The mismanagement has been acutely felt in the north-east, with the prime example being the underperformance of the North East Ambulance Service NHS Trust. That was the subject of a Westminster Hall debate about two weeks ago in which I and a dozen other north-east colleagues raised our numerous concerns. I hope that the Government have listened to those concerns and will act as soon as possible.

Instead of addressing the issues that the NHS is facing on a day-to-day basis, the Health Secretary took it upon himself to enter into a protracted fight with our junior doctors. They do an amazing job of treating patients in difficult circumstances, yet he has battled with them remorselessly over their pay and conditions. It is welcome that a deal has now been struck between the Department of Health and the junior doctors after everyone was at last brought back around the negotiating table. However, this all could have been avoided, including the recent strike action, if only the Health Secretary had meaningfully listened to the junior doctors’ concerns about the impact the proposed changes to their contracts would have on the NHS.

The Health Secretary must rethink his entire strategy for the national health service and ensure that it does what it was created to do. I want to quote from the leaflet that every home received when the NHS was launched in 1948:

“It will provide you with all medical, dental and nursing care. Everyone—rich or poor, man, woman or child—can use it or any part of it.”

It was Nye Bevan who said:

“Illness is neither an indulgence for which people have to pay, nor an offence for which they should be penalised, but a misfortune, the cost of which should be shared by the community”.​

We should have seen something like that in this Queen’s Speech. But wait—no, that only happens in a Labour Queen’s Speech. That is how we got our NHS in the first place.

The BBC is another of our treasured public services that the Government are trying to undermine. The Culture Secretary is using tactics that can only be described as bullying and intimidation to make the BBC accept a new charter—which is in no one’s interests other than those of commercial media moguls—and he has shown his true colours by going on record as saying that the disappearance of the BBC is a “tempting prospect”. Those are the words of the man who is supposed to be in charge of nurturing and championing British culture and talent.

The Government’s proposals aim to hobble the BBC, and they will put its position as an independent public broadcaster in jeopardy by introducing Government appointees to oversee the organisation. That is a clear attack on the BBC’s independence and its ability to hold the Government to account. Putting Government-approved people on the board would threaten the very existence of the BBC as we know it. Peter Kosminsky, the director of “Wolf Hall” and winner of the BAFTA Best Drama award, has said that

“the BBC’s main job is to speak truth to power—to report to the British public without fear or favour, no matter how unpalatable that might be to those in government.”

Those words remind us exactly why the Government must maintain the integrity that the BBC has come to be respected for, not just in the UK but right across the world.

The BBC is not only one of our main sources of news and information; it also acts as a beacon for British culture and talent and is a true cornerstone of UK plc. From giving that much-needed break to up-and-coming artists on BBC radio stations to the many TV programmes that showcase the greatest aspects of British life—commercially successful shows such as “Strictly Come Dancing” and “The Great British Bake-Off”, informative and incredible documentaries such as “South Pacific”, “Frozen Planet” and the many other David Attenborough documentaries that have taken us into some of the most remote and exotic places in the world—the BBC is the very best of British in everything it does, and we get to enjoy all that for the remarkably good-value price of just 40p a day while sitting in the comfort of our own home. However, the Culture Secretary has persistently put the future of commercial BBC programming in jeopardy by saying that the BBC should focus on broadcasting for the public good. He clearly forgets that all shows broadcast by the BBC, whether commercial or informative, are for the public good. The two cannot be separated because commercially successful programmes help to fund world-class documentaries that are viewed across the globe. My Opposition colleagues and I will do everything in our power to ensure that one of our most treasured institutions is protected, continues to drive creativity in the 21st century, and is accessible to all.

Going back to Peter Kosminsky, he also said in his acceptance speech at the BAFTAs:

Never have truer words been said about our BBC. We need to defend it at all costs from the damage that this Government wish to inflict upon it. Our NHS and BBC ​make us proud to be British. When it comes to damaging those two precious public services, the Government will not get an easy ride either from Opposition Members or from the wider public watching today.

Does the hon. Lady agree that the BBC is uniquely able to tackle difficult issues such as controlling abuse? She may have been following the recent story in “The Archers” relating to Helen Titchener, which showcases the BBC at its best. If the hon. Lady goes on to the “Free Helen Titchener” JustGiving page, she will see that the BBC has been involved in helping to raise £130,000 to support women’s refuges across the country.

I am so pleased that I allowed that intervention, because it was excellent. I thank the hon. Gentleman for that, and I do agree with him.

The NHS and the BBC are cherished institutions, providing an essential public good. They are the very best of British. The proposals are a damning indictment of this Government’s attitude towards our country and those two great institutions, of which I believe the whole country is immensely proud. That is why we cannot allow them to be dismantled or diminished in stature or performance. On the day that the NHS was founded, Nye Bevan said:

“The NHS will last as long as there are folk left with the faith to fight for it.”

His words apply equally to the BBC in this context, as much as he intended them for the NHS. We need to have faith now, and we need to fight for both of them before it is too late. Otherwise, the NHS and the BBC, which our grandparents’ generation so proudly created, will no longer be there for our grandchildren, who will never forgive us.