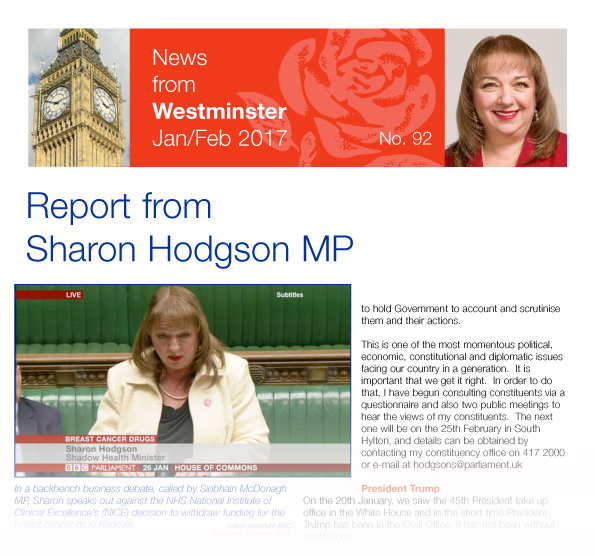 In her capacity as Shadow Minister for Public Health, Sharon responded to a Backbench Business Debate on Breast Cancer Drugs, specifically the drug, Kadcyla and other drugs used for treatment of breast cancer. 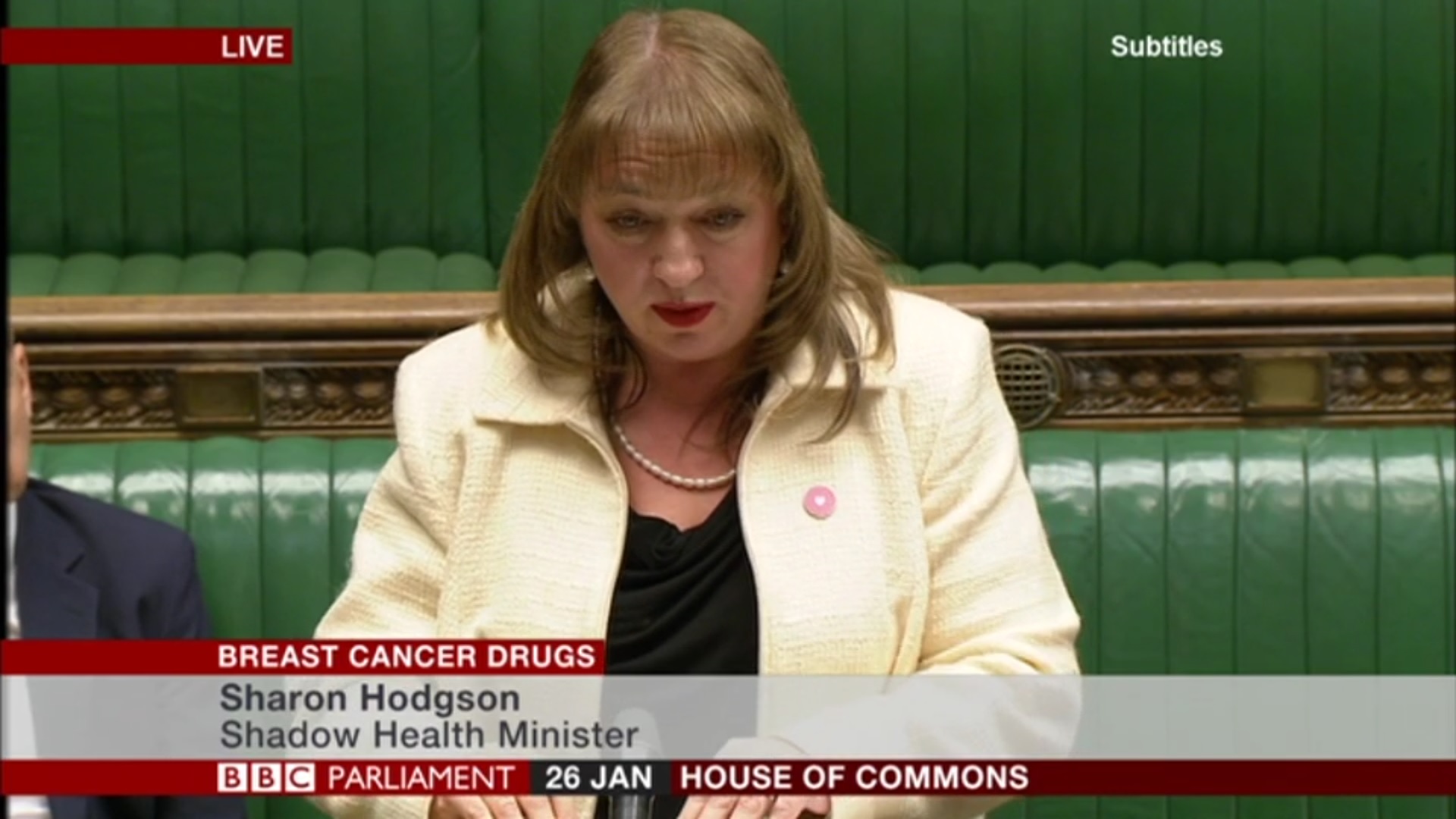 I thank my hon. Friend the Member for Mitcham and Morden (Siobhain McDonagh) for securing this debate, following the very sad news that her friend Samantha Heath, who had been receiving this life-extending treatment, had heard from NICE that it was being taken away from her. I am pleased that she was able to secure this important debate through the Backbench Business Committee.

I also thank all colleagues who have attended the debate and made excellent speeches, sharing with us their experiences and thoughts, including the hon. Members for Milton Keynes South (Iain Stewart), for Portsmouth South (Mrs Drummond), for Louth and Horncastle (Victoria Atkins) and for Wycombe (Mr Baker), my hon. Friends the Members for Torfaen (Nick Thomas-Symonds) and for Wythenshawe and Sale East (Mike Kane) and the hon. Member for Linlithgow and East Falkirk (Martyn Day), who spoke for the SNP. I am sure that the Minister has been given lots to think about, and I look forward to her response shortly. I also thank Breast Cancer Now for its work campaigning on this matter, along with Breast Cancer Care for its continued dedication and its support and advocacy for individuals with secondary breast cancer.

In my contribution, I will first briefly establish the documented and perceived benefits of Kadcyla, and then, building on that, discuss the broader issues around the provision of off-patent drugs, before moving on to present the problems with determining the funding of a drug based principally on its cost-effectiveness as judged by NICE.

Kadcyla’s continued funding through the cancer drugs fund in 2015 was a great success for patients and patient advocates. At the time, the value of the drug was recognised and the concession was made that, despite its high cost, its positive impact was worth the funding it needed. Yet just over a year later, the alterations to the cancer drugs fund have prevented the future funding of this drug, along with, potentially, that of a number of other secondary breast cancer drugs such as palbociclib and Perjeta—I hope that I pronounced those correctly—as it moves towards becoming a funding mechanism for under-researched but innovative drugs with cost and value as a principal driver, and away from its original principle, which was to finance drugs that were too expensive to be recommended by NICE but proved effective in treating cancer patients.

We can all agree that patients have benefited significantly since the introduction of the cancer drugs fund, but the progress that has been made in recent years in improving access to cancer drugs is now at risk. That is unsurprising, given the cash-strapped state of the national health ​service—we have discussed that in the House recently in the past few weeks—which faces pressures to provide these costly drugs that are developed by large pharmaceutical companies, and is forced to consider costs rather than clinical need. I hope that the Minister will tell us whether those concerns have been assessed, and how she plans to address them. We have heard a number of good suggestions today about how funding may be redirected.

Is not the situation made all the more poignant by the fact that since 2001, the incidence of breast cancer has been rising by 9% every year?

That is a very good point. It may be that more and more people are coming forward and being diagnosed, but, as my hon. Friend says, this will clearly become more of an issue, not less of an issue, in the years to come.

As we have heard today, it is estimated that Kadcyla benefits 1,200 women every year in England alone, and that on average it can increase the length of a woman’s life by six months, although reports suggest that in the case of some women that can stretch into years. Even if it is measured in months, however, the extra time is surely priceless to the women and families involved. I speak from personal experience, as I lost my mother-in-law to secondary breast cancer 20 years ago this year, when my children were very small. I know that she fought for every extra week and day in the end, and that she would have given anything for an extra six months to spend with her grandchildren. We all wanted that little bit longer for her. For all those 1,200 women, that extra time is time with their families. It means seeing their children reach perhaps one more milestone, starting school or university, getting married, or even giving them a grandchild. What is the cost of such moments, such memories, which are so precious and which help families so much with what, ultimately and inevitably, will follow?

The hon. Lady has made a powerful point. In the case of the most aggressive cancers, the period between diagnosis and death can be very short. As the hon. Lady says, any extension of life enabling women to celebrate family events, or anything else, is incredibly important, and we should not lose sight of that.

I agree. What price can be put on those precious months?

I have some investment in this. My own experience of breast cancer treatment over the last two years has left me passionate about the issue of prevention and early diagnosis. Will my hon. Friend join me in not just thanking the breast cancer charities—as she has already done—but calling on all Members to spread the word among all the women they know that they must learn how to examine their breasts? I learnt how to do it from a comic sketch in a television programme: that is how I diagnosed my lump. I want everyone to learn how to do it, and also to learn what they can do to help prevent breast cancer, because, although there is no magic prevention method, there are ways of reducing the risk.

Although we have not so far touched on prevention or early diagnosis, they are vital issues. We have discussed them in the House on many occasions, but they can never be discussed too often, and I am grateful to my hon. Friend for raising them. Let me add that I am happy every day to see her back in this place, and doing so well.

What also stands out with Kadcyla is the reduced side effects, as we have heard, as opposed to alternative breast cancer treatments, the side effects of which can include the inducement of osteoporosis and an increased risk of blood clots. As some colleagues will, sadly, know first-hand or through experiences of family and friends or constituents, the side effects of some cancer treatments can be truly awful, and in some cases are daunting enough to prevent the acceptance of further treatment entirely. It is a common perception that women make the decision to end their treatment much earlier than planned, despite it prolonging their life sometimes. That is because they feel the suffering they are enduring as a result of the treatment is not worth the additional life it is providing to them, because it is all about the quality of that life.

Research conducted by Genentech in the United States on the side effects of Kadcyla found that less than 5% of women taking the treatment suffered any hair loss. Through my work as co-chair of the all-party group on breast cancer, I know that hair loss can be a highly traumatic experience for women undergoing cancer treatment and is one of the most discussed side effects of cancer treatment in general. Given that in this debate we are discussing the treatment of secondary breast cancer, which is ultimately a terminal disease, the best outcome we can offer through treatment is both the extension of life and the preservation of the quality of life enjoyed pre-diagnosis. Therefore, because Kadcyla causes fewer side effects, it represents a treatment that can effectively achieve not only an extension of life, but the preservation of some of that quality of life enjoyed by these women pre-diagnosis. So I look forward to hearing from the Minister about what she is doing to ensure women will benefit from this vital treatment in the future.

I will now move on to how we can better support off-patent drugs, especially for breast cancer. Drug patents typically last for 20 years—although sometimes only 10 years—and at the end of that patent there is very little incentive for the drugs to be licensed for use in another indication. These drugs are still clinically effective in many cases and can be a low-cost effective treatment, but currently the NHS has no method for making them routinely available.

Bisphosphonates are one such example of an off-patent drug that is not being made universally available to patients, despite evidence showing its effectiveness. It is estimated that, if given to the entire eligible population, this drug could prevent one in 10 breast cancer deaths. It is therefore concerning that research conducted by the UK Breast Cancer Group found that only 24% of breast cancer clinicians were offering bisphosphonates to patients. Solving this issue therefore provides an opportunity to improve breast cancer survival rates, and it is something that I hope the Minister will consider carefully.

I want to finish by discussing the cost-effectiveness of drugs. Currently NICE measures cost-effectiveness using quality-adjusted life years—QALY—and one QALY is ​equal to one year of life in perfect health. As I am sure colleagues will agree, it is almost impossible to objectively measure someone’s quality of life, and there are questions surrounding the morality of attempting to do so, as raised in NICE’s “Social value judgements” paper on the moral evaluation of drugs.

As is so often the case in these debates, a clear cause of the problem lies with how NICE approves drugs. At the last general election, Labour proposed a top-to-bottom reform of NICE, ensuring that drug acceptance and funding is determined solely by clinical need, not with cost or value considerations. This debate shows there is clearly a need to re-address these issues.

As I have already mentioned, Kadcyla patients tend to experience considerably fewer side effects, and this can potentially have a positive impact on their ability to enjoy a higher quality of life post-diagnosis. Because of practicality and cost implications, it is almost impossible for NICE to comprehensively and effectively measure this exact quality of life. However, what we can say, without a doubt, is that these individuals would suffer a lower quality of life without Kadcyla, and this, I believe, deserves more attention and value in the process of drug approval and funding.

The current funding of drugs is becoming based on the cost-effectiveness of a drug, rather than the clinical need, yet, as this debate has shown, it should not be the final deciding factor as it disregards very personal reasons for many people who rely upon drug treatments. Kadcyla has benefited many women during their time living with a terminal disease, and has now been pulled, devastatingly, out of their reach.

It is the Minister who has the levers of power to address the problems in the system which is letting these women down. Members from across this Chamber have eloquently made their case to the Minister. I hope she has listened—I am sure she has—and will give these women and their families some reassurances today.