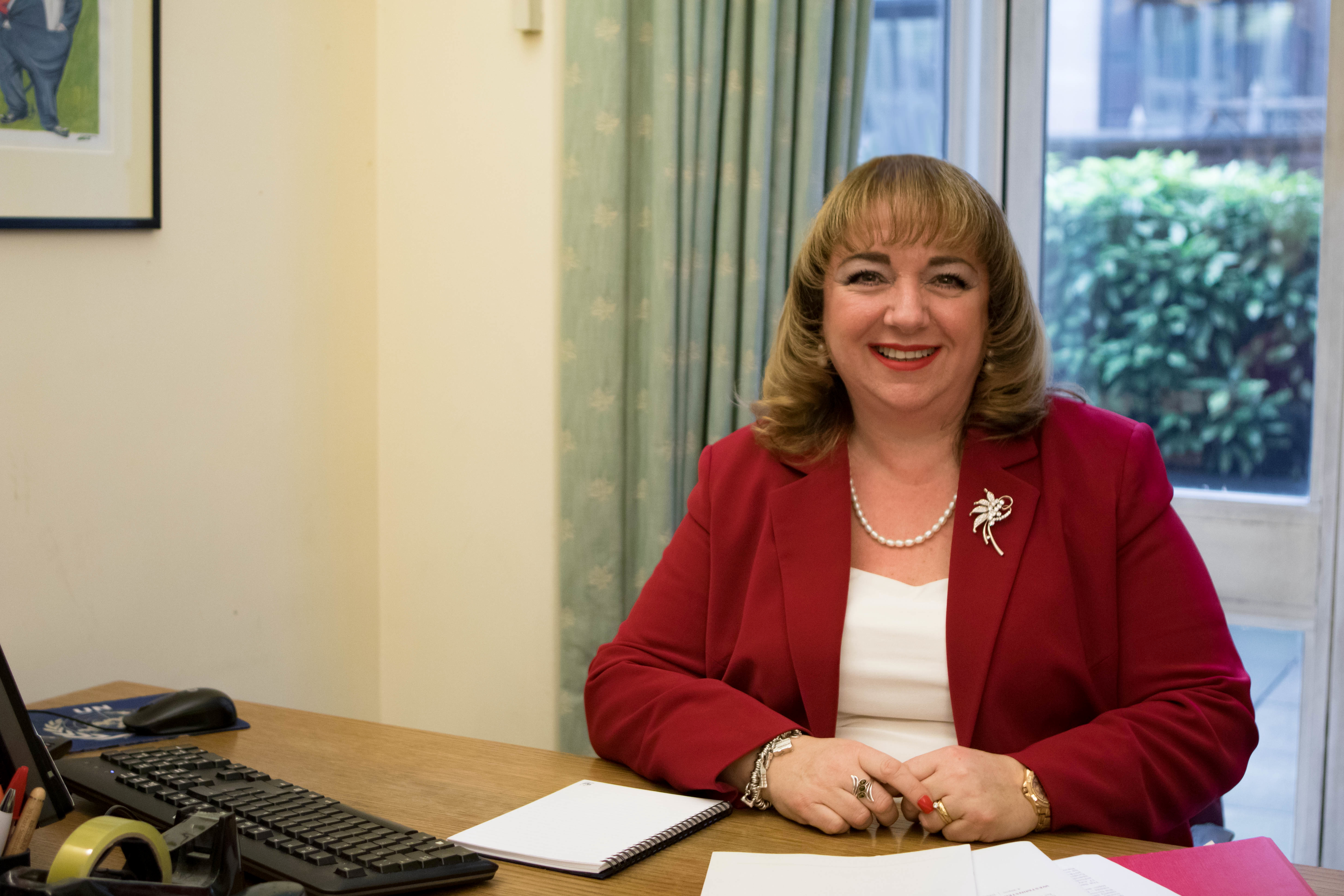 The proposed gasification plant at Hillthorn Farm in Washington is at the next stage of the planning process. On 19th July 2019 at 4:30pm, the application will be referred to the Planning and Highways Committee at The Stadium of Light. 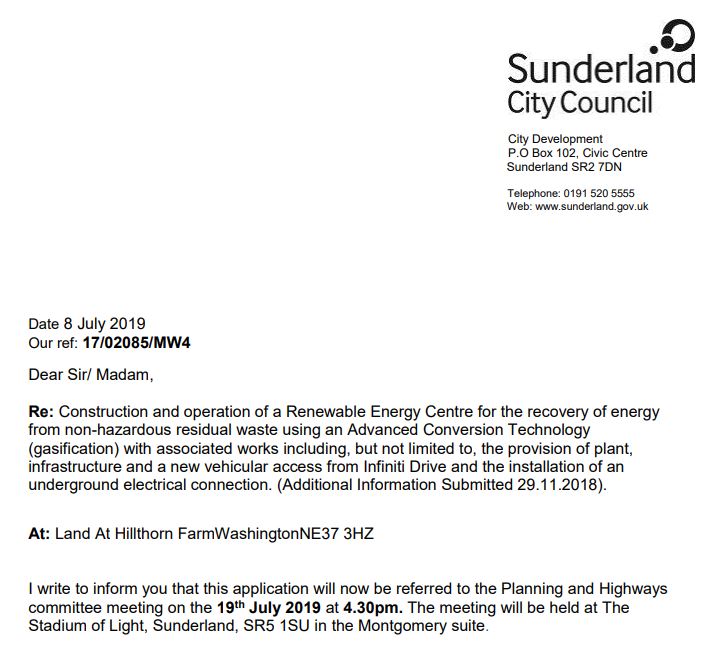 To view the letter in full and find out how to apply to speak at the meeting, please click the image above

Update from Sunderland Council regarding the gasification plant in Washington: Committee Meeting

Sharon receives a response to her letter (of 13th Dec, 2018) requesting an update from Sunderland City Council, regarding the gasification plant application in Washington. 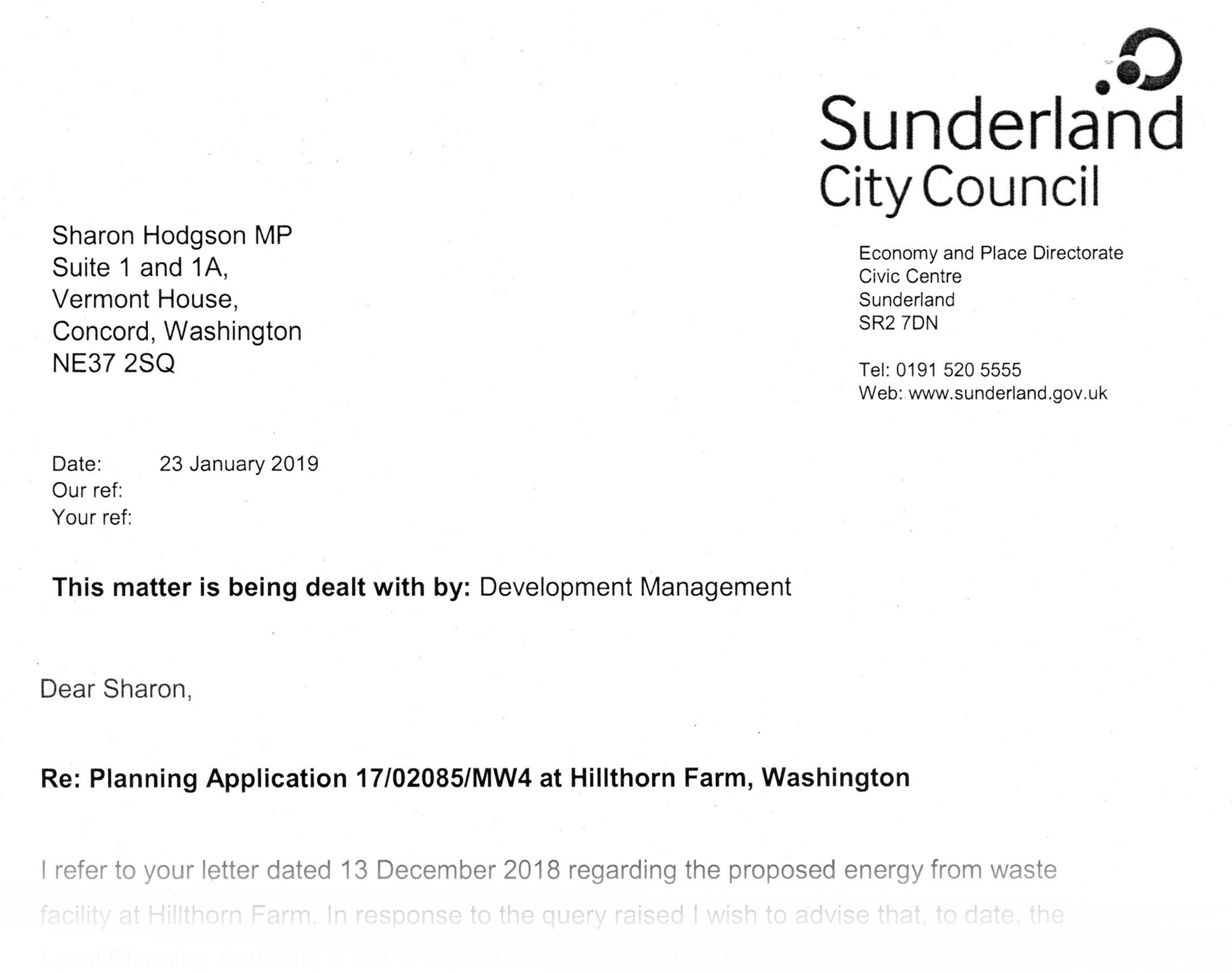 Update from Sunderland Council regarding gasification plant application in Washington

Sharon has written to Sunderland Council for an update on the proposed gasification plant application in Washington. 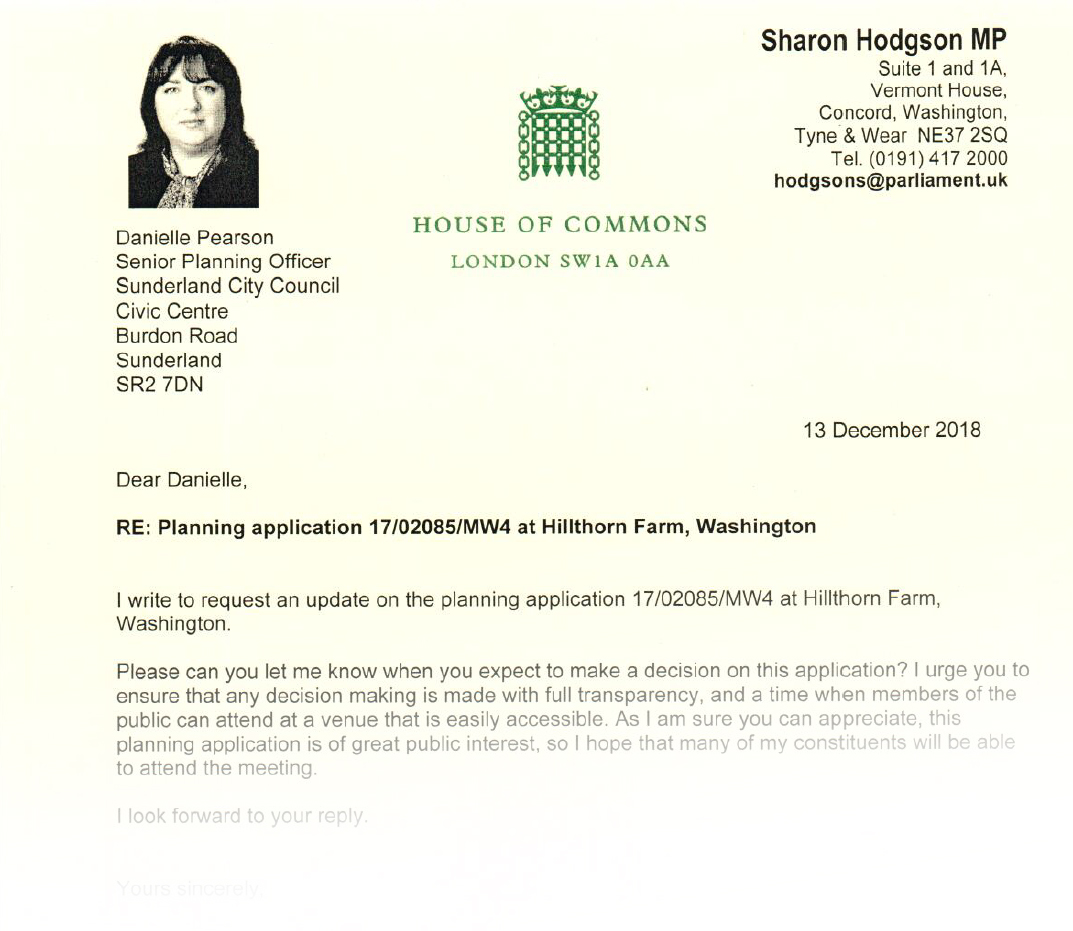 On invitation by Sharon Hodgson MP, Andrew Gwynne MP, Labour’s Shadow Secretary of State for Communities and Local Government, attended a rally on 1st October 2018, in opposition to plans for a waste incinerator to be built in Washington. 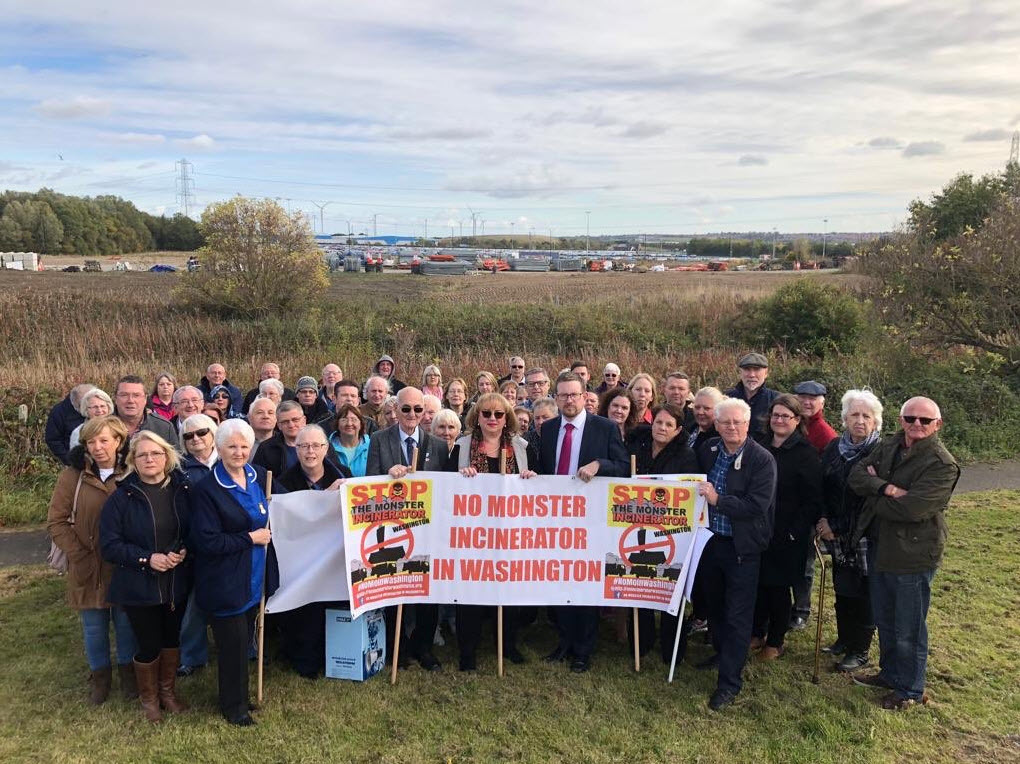 The rally was attended by local residents and campaigners who oppose the incinerator being built at the site at Hillthorn Farm.

During the rally, Andrew said:

“I think the close proximity of residential properties is really quite shocking and I hadn’t appreciated until we came to the site.

“I feel very strongly that the environmental considerations should be uppermost in decision makers minds.” 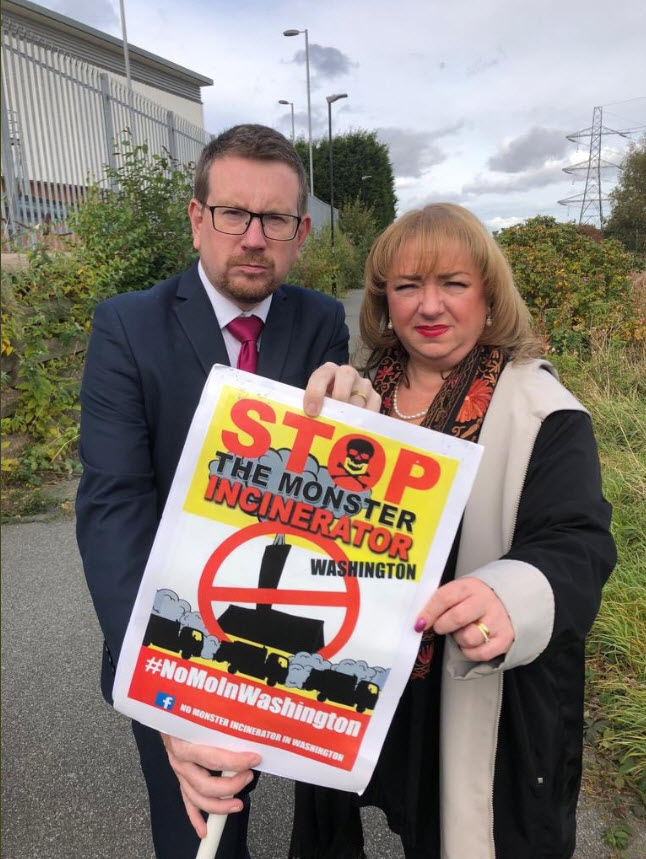 Sharon, who has been opposing the plans, said:

“It was great to have Andrew visit the site today and speak to local residents who will be affected if these plans go ahead.

“I share my constituents’ concerns that the technology of the incinerator plant is not tried and tested, and that the proximity to local residents could pose a threat to their health and safety.”

The planning application is yet to be submitted to Sunderland Council.

You can read Sharon’s letters regarding the incinerator here. 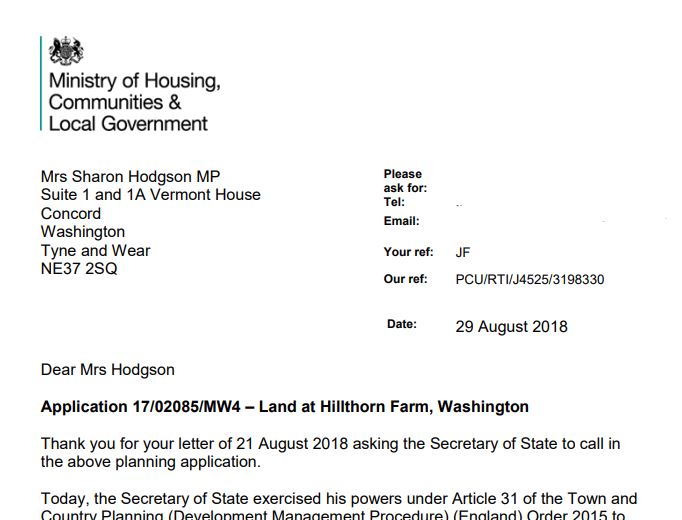 Sharon has received the above response from the Planning Casework Unit regarding the Rolton Kilbride planning application. The call in request has moved to the next stage.

You can read Sharon's original call in request letter here 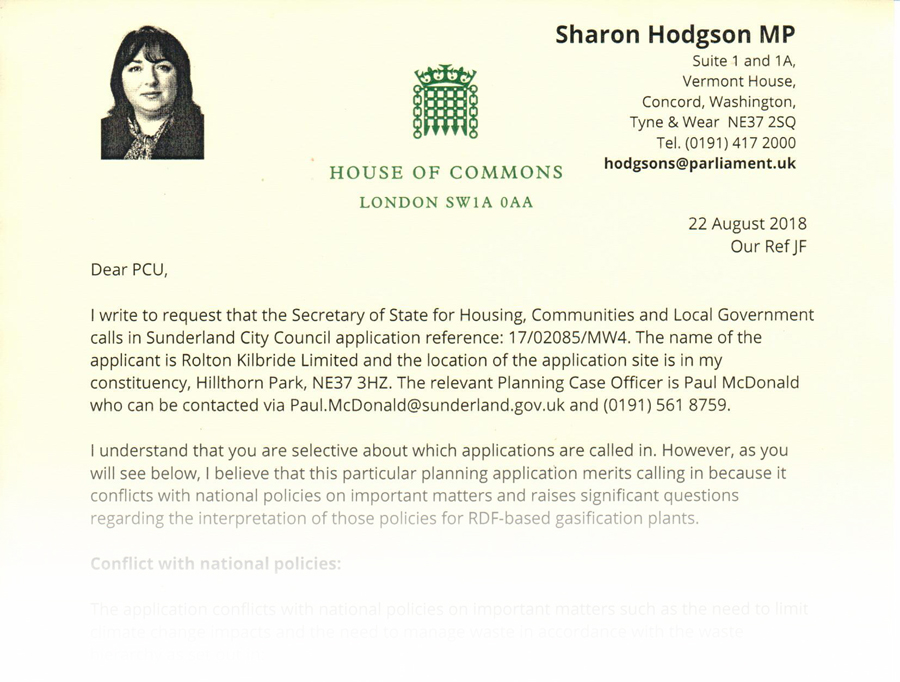 Sharon has written to the Secretary of State for Communities and Local Government, requesting a call-in of the Rolton Kilbride planning application.

Sharon has received a response to her letter on 27th July. 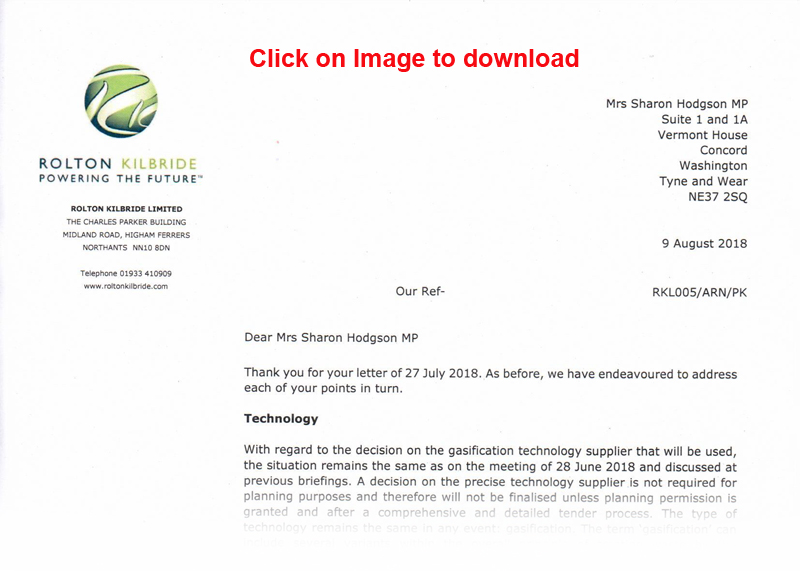 If any constituents have any queries about this response, please do email Sharon and we will forward your concerns on to Rolton Kilbride and the Local Planning Authority at the Council for you.

Sharon has again written to Rolton Kilbride for answers to constituents' questions. 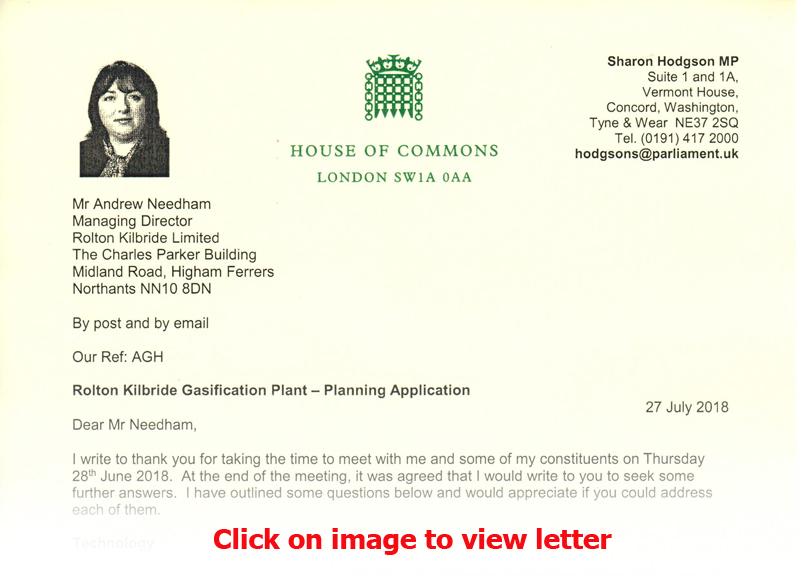 Brief outlining regulation of the waste sector in the Washington Cluster