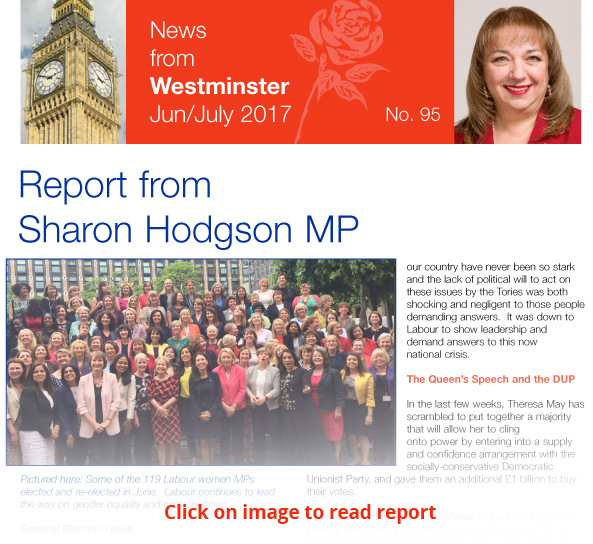 During my 12 years as a Member of Parliament, I have stood up for local people in our area by holding firstly the last Labour Government and more recently the Tory/Lib Dem Coalition and the current Tory Government to account, as both a backbencher and a Shadow Minister.  I travel down to Westminster every week to do this and to push for changes that will benefit our community and the North East as a whole.

I hope to continue doing so and hope that I can count on your support in my re-election to continue to represent Washington and Sunderland West in Parliament.

Theresa May has laid down the gauntlet and has made this General Election about Brexit and about weakening scrutiny of her and her Party in Parliament, by wrongly claiming other political parties are trying to block Brexit from happening, when in actual fact, what we are doing is simply our democratic duty in holding this Government to account.  This is a completely false accusation, as three-quarters of MPs and two-thirds of the House of Lords voted in favour of triggering Article 50 back in March and respected the will of the people.

This is all about her wanting a bigger majority to push through her right-wing ideological agenda of austerity for the UK.

Labour under Jeremy Corbyn has a plan when it comes to Brexit and we will be making our case clear in the coming weeks about what our future relationship with the European Union will look like, but this General Election must also be about not letting the Tories go unchallenged on other important issues.

Our alternative case set out by Jeremy over the last few days and weeks shows a clear difference in our vision for Britain.  We don’t have to endure continued Tory rule, which has seen a combination of failed economic growth for regions such as our own and deep and damaging cuts to our welfare state and public services, such as schools, our NHS and local government.

Labour have always been about standing up for working people, and Labour will use this General Election to prove this to be true and ensure we see a Labour Government elected on 8th June, that will put the people of Washington and Sunderland West first.

I hope I can count on your vote on the 8th June.

Show your support for Sharon by: