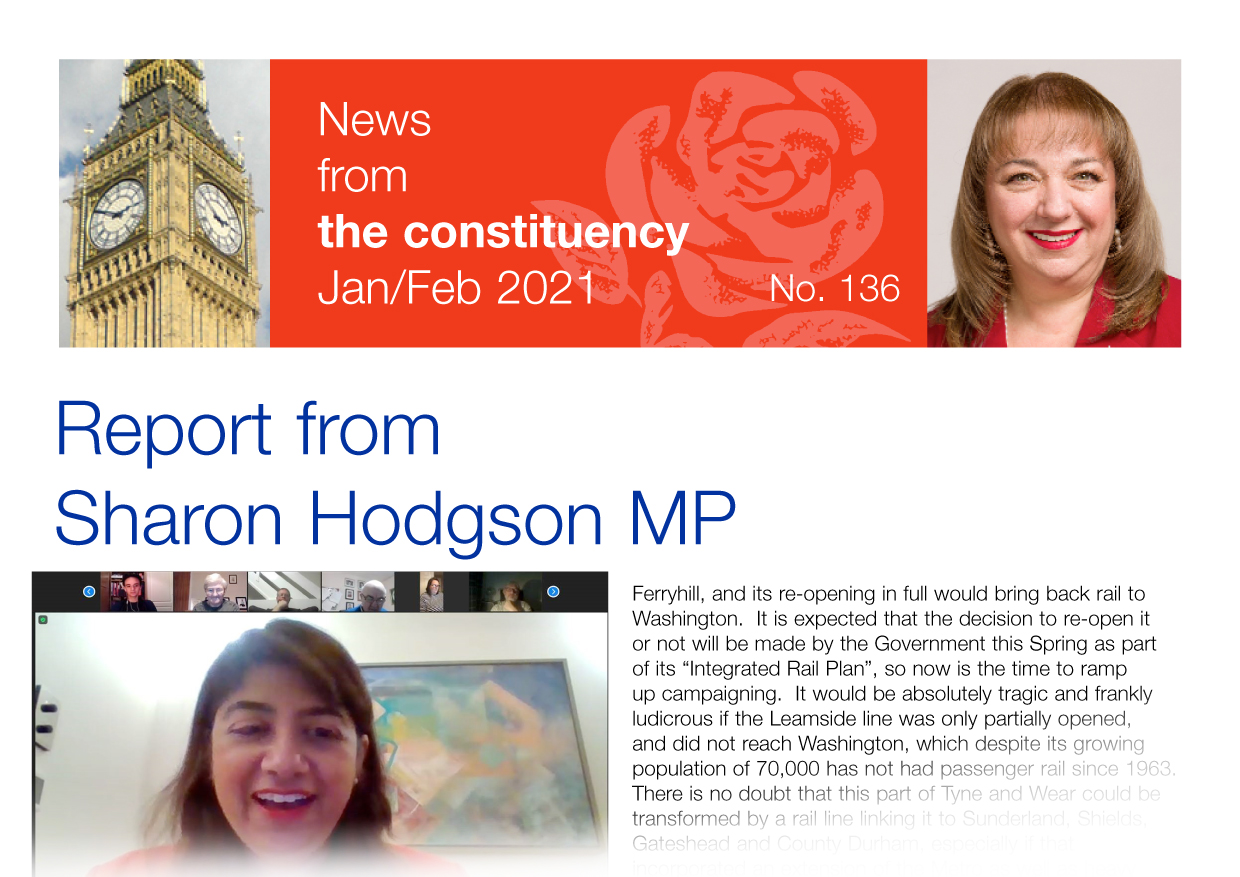 Sharon has received a response to her letter calling on Secretary of State for Transport to urgently support the Tyne and Wear Metro during the Coronavirus pandemic. 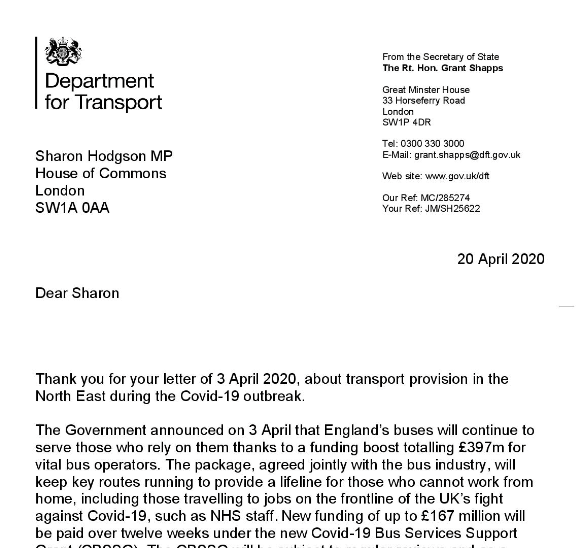 Sharon also signed a letter alongside other North-East MPs to Grant Shapps MP, Secretary of State for Transport on this issue.

The response to that letter can be read here >

Both original letters sent to Grant Shapps MP, Secretary of State for Transport, can be read here > 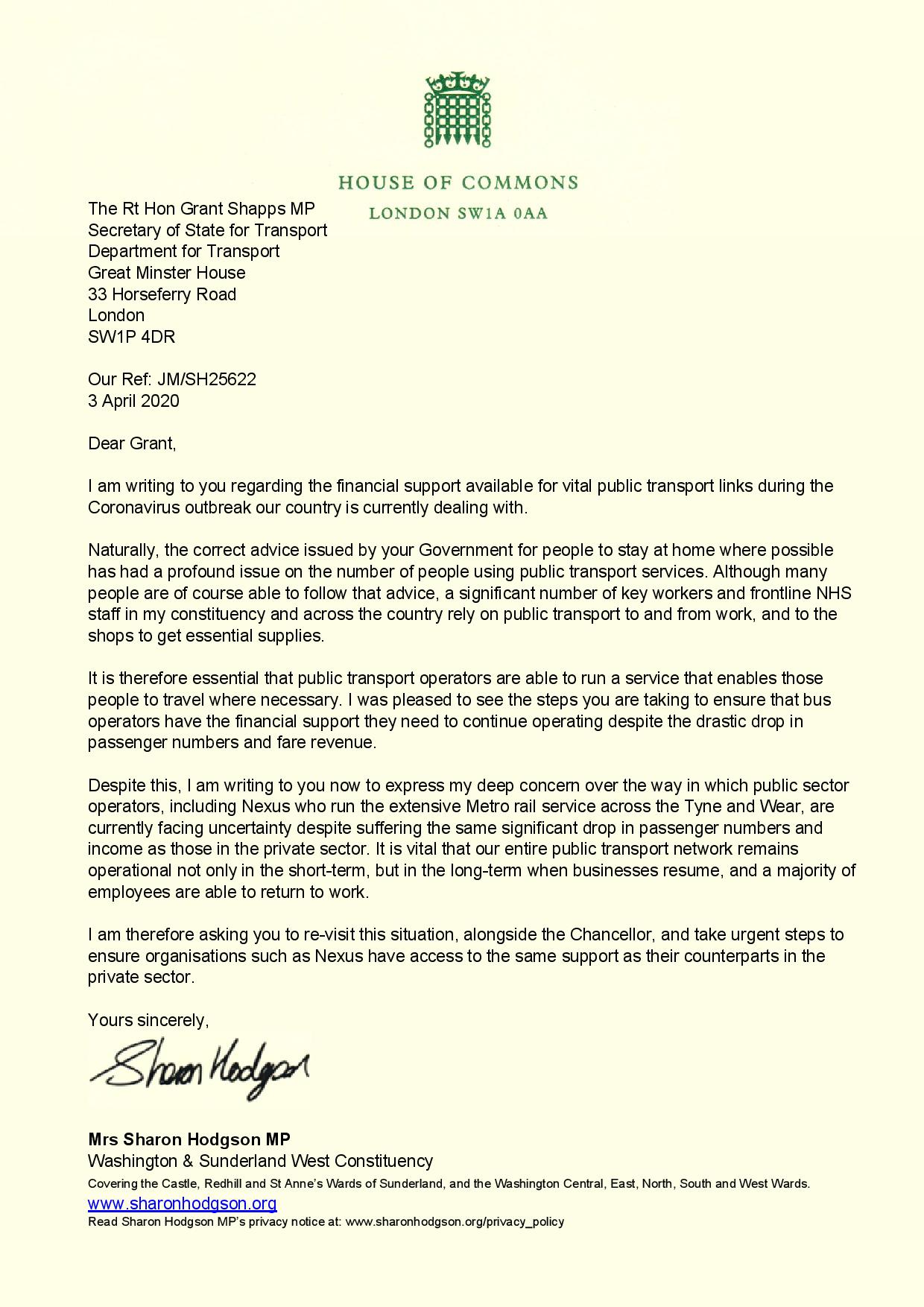 Today, Sharon submitted a letter to the Department of Transport’s Call for Evidence on light rail. Sharon has also sent a copy of this letter to the Transport Secretary, Chris Grayling. 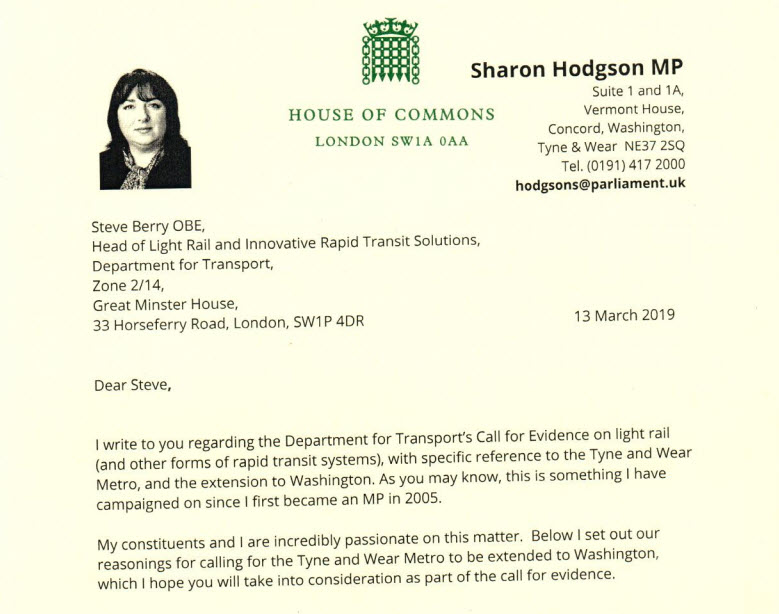 Washington is the largest conurbation in England without a rail link, despite having a population of almost 70,000. While our Metro is one of our national treasures, residents of Washington do not benefit directly from it, and I believe an extension is well overdue. This is an issue myself and my constituents are passionate about.

The letter provides an outline of numerous reasons that the Metro should be extended;

Incentivise investment and growth, while promoting higher employment rates and more opportunities for not only Washington but Tyne and Wear as a whole

Incentivise residents to use a more sustainable mode of transport, helping our environment and congestion in the region, where 70% of Washington residents are currently car-dependent

"Despite being left behind so often, Washington has so much potential. I believe that an extension of our Metro to Washington is an opportunity to make the future of Tyne and Wear a prosperous one."

On Thursday 21st March, Sharon raised this in the House of Commons during Transport Questions. You can watch Sharon's question here

Sharon receives a response from Jo Johnson MP, the Minister of State at the department for Transport about the Tyne and Wear Metro. 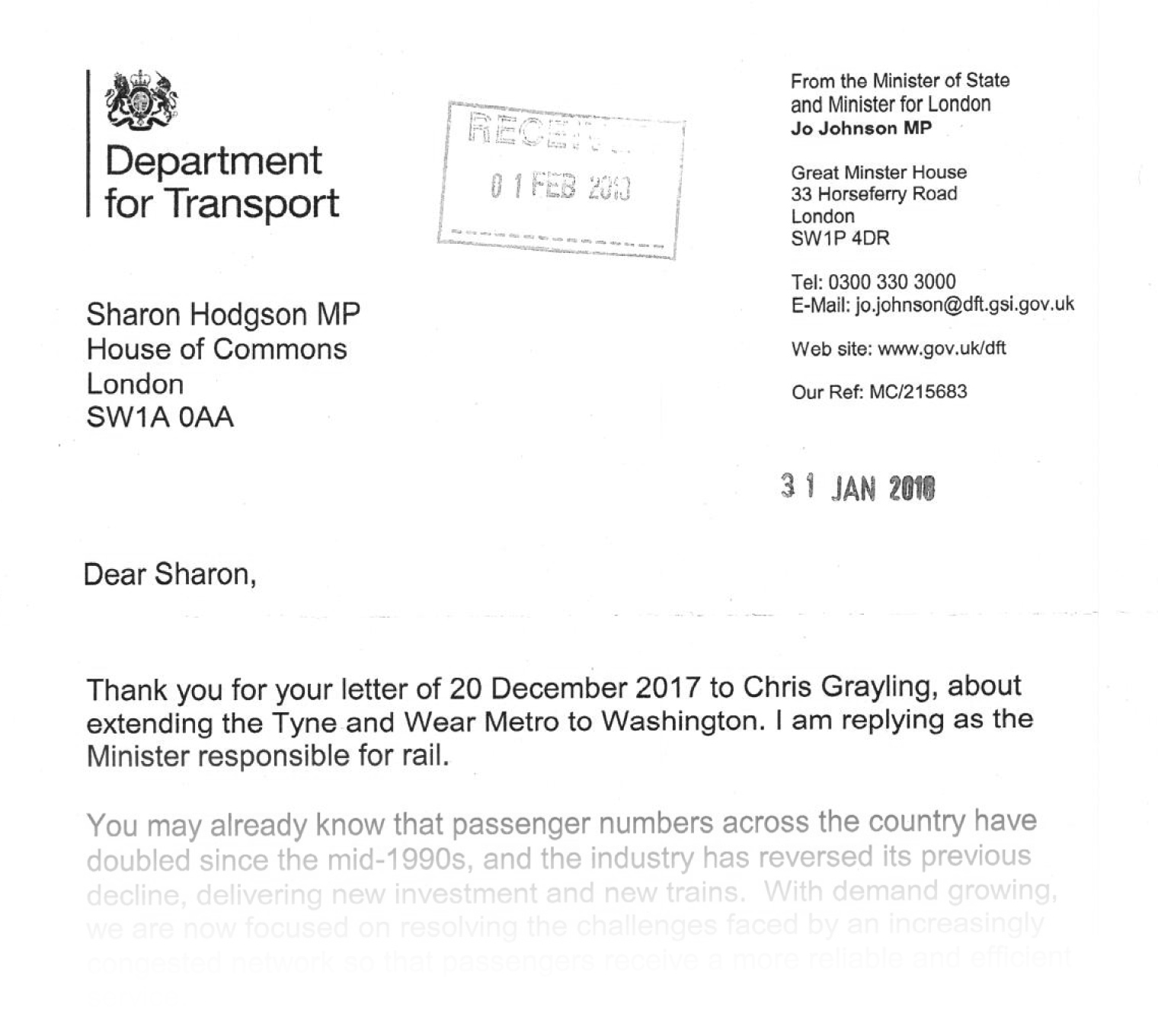 Click on the image above to read the letter. 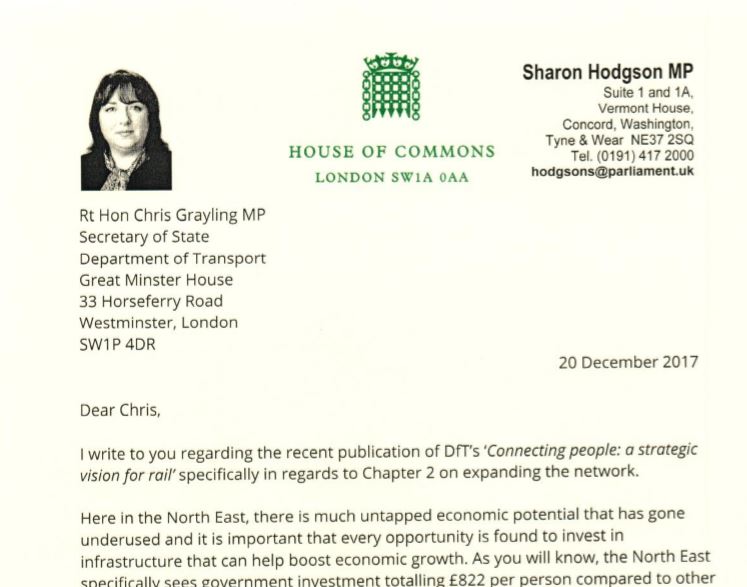 Sharon has today (20th December) geared up her long-standing campaign to bring the Tyne and Wear Metro to Washington with a letter to the Transport Secretary, Chris Grayling MP, following the publication of the Department for Transport’s: Connecting people: a strategic vision for rail.

In her letter, Sharon raises the need for much needed economic growth in the North East and how this can be untapped with improved transport infrastructure investment and highlights how the extension of the Metro network into Washington is a perfect example of unlocking economic growth.

Further in the letter, Sharon outlines how statements made in the Connecting people document help make the case that she has been making for many years now, including the improved connectivity that extending the Metro, and therefore the Leamside Line, but also the jobs it can bring to not only the major cities but also Washington itself.

“Banging the drum in Parliament for this campaign is something I have been honoured to do, and will keep on doing, as it would help unlock the much needed economic growth our region so desperately needs.

“The vision set out by the Government does leave me with trepidation following their shoddy track record on transport infrastructure; yet, this is a perfect opportunity to make the case to ministers to fund this long-standing campaign.

“For too long, the people of Washington have waited for improvements to their transport connectivity by extending the Metro to Washington and it is high time ministers acted to give the people of our town the transport network they desire and deserve.”

You can read Sharon's letter to the Transport Secretary by following this link HERE. 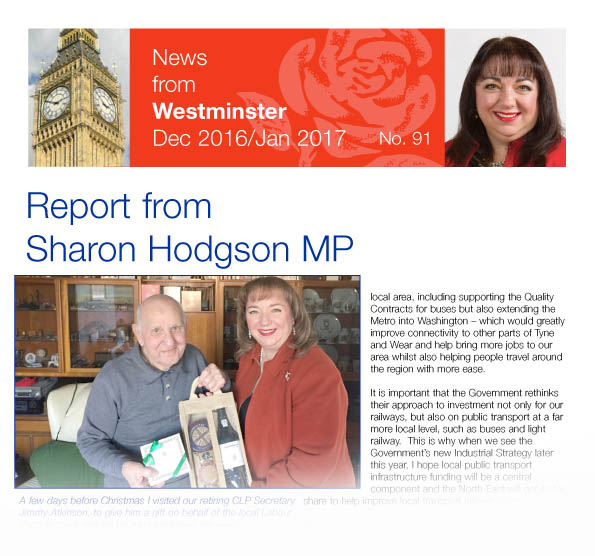 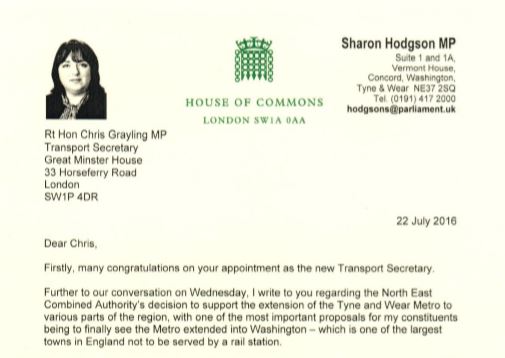 Sharon Hodgson has written to the new Transport Secretary, Chris Grayling MP, calling on him to support the recent decision by the North East Combined Authority (NECA) to support extension of the Tyne and Wear Metro into areas of the region currently not served by the Metro, such as Washington.

The decision by the NECA has been welcomed by Sharon as part of her campaign to see the Tyne and Wear Metro extended into Washington – the fourth largest town in England not served by a rail station.

As part of her campaign, Sharon has repeatedly called on the previous Coalition Government and the current Conservative Government to support vital transport infrastructure in the region, seen through submitting three petitions in the last Parliament and one during this Parliament last July on behalf of residents and in her speech in the Budget debates earlier this year where she called on the former Chancellor, George Osborne, to seriously invest in North East transport infrastructure as part of his Northern Powerhouse project.

In Sharon’s letter to the Transport Secretary she raised the long-standing history of rail in the region, and specifically within the constituency of Washington and Sunderland West with the Bowes Railway Museum, which is based on part of one of the first railway routes in the country which was built by George Stephenson and the need to support the decisions made by local decision makers to invest in local transport infrastructure, whereby extending the Metro would allow the much-needed economic growth in the North East to be realised and better transport access to Tyne and Wear’s two city hubs, Sunderland and Newcastle.

Following her letter to the Transport Secretary, Sharon said:

“It was very welcome when last week news broke that the North East Combined Authority was considering Metro extension plans, including into Washington, and that this has now been fully backed at a full meeting of the Combined Authority this week.

“My constituents have made their voice clear that they want to see the Metro extended into Washington and time and time again, I have raised this on their behalf with the previous Coalition Government and the current Tory Government as something vital to the Government’s Northern Powerhouse project.

“Now is an important time for the Government to act and support the business case set out by the NECA which will be put forward to the Transport Secretary in the coming months and I hope he will deliver for the region. As always, I will be continuing to push on this important matter for my constituents at every available opportunity in Parliament.”

You can read Sharon's letter to the Transport Secretary here.

Sharon raised extension of the Metro into Washington during her contribution to the Budget debates. You can read her speech here.

If you support the extension of the Metro into Washington, you can sign Sharon's petition here. 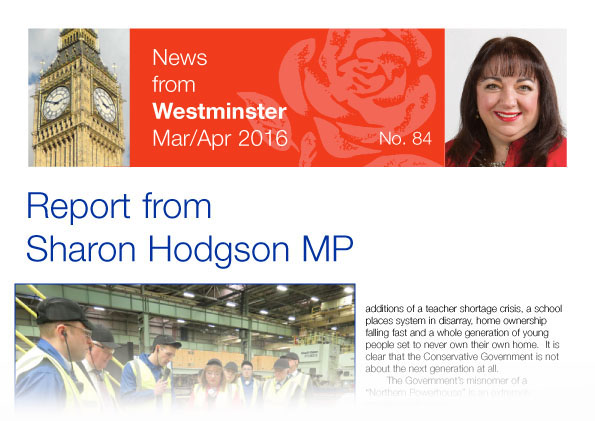