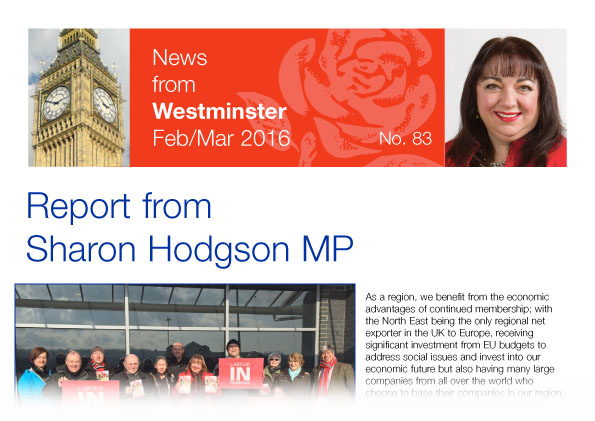 Following the Prime Minister's renegotiations with other European Union (EU) leaders and his statement to the House of Commons today (22.02.16), Sharon has released a statement on why she is supporting the UK remains in the EU.

Now that the Prime Minister has achieved his intended goals for renegotiation, it is now time for the country as a whole to make a decision about our future membership of the European Union in the lead up to the referendum on Thursday 23rd June 2016.

David Cameron’s renegotiation talks with other European leaders were a long and drawn out affair which never delivered the reforms that would have made the EU work better for working families.

Whilst the Prime Minister could have made more of a case for better working conditions and democratic accountability, this does not mean we should vote to leave the EU based on Cameron’s botched renegotiations and instead remember that the reform is not a flash-in-the-pan venture but an on-going process that must always ensure the British public are at the heart of decisions made by the EU.

As a proud trading nation, almost half of our exports go to EU countries – worth an estimated £337 billion last year to the UK economy. Not only do we benefit from trade but also from the direct investment from other EU countries, which is on average worth £26.5 billion. To lose access to the single market by leaving the European Union would have a direct impact on our future economic prosperity and the estimated 790,000 more jobs to be created by 2030 by opening up markets in digital services, energy and tourism within Europe.

As a region, the North-East benefits greatly from our membership of the EU with our region being the only regional net exporter in the UK to Europe, receiving significant investment from EU budgets to address social issues and invest into our economic future but also the large companies from all over the world who choose to base their companies in our region, such as Nissan here in Sunderland, and recruit and train a local workforce and bring much-needed growth.

Labour understands the importance of our continued EU membership and the good that this can bring to ordinary working people’s lives. It was Labour who worked within the European Union to push for better rights for British workers, including minimum paid leave, rights for agency workers, paid maternity and paternity leave, equal pay, anti-discrimination laws, and protection for the workforce when companies change ownership. To exit the EU would put this all in jeopardy.

Britain has a proud tradition as an outward-looking country whilst working collaboratively with the international community on issues that not only affect our national security, but that of the rest of the world, including matters relating to climate change, terrorism and cross-border crime. Instead of becoming an isolationist nation, we must use all the avenues possible to us to ensure our nation remains protected. This includes our continued membership of the EU.

Britain is far better off remaining a member of a reformed European Union fighting for further reforms, rather than standing on the side-lines as spectators throwing stones.

The next few months will be important in deciding the future of the UK, and may be one we never see again in our lifetime. That is why I will be campaigning to remain a member of the European Union so that we can protect Britain’s best interests, both in terms of the lives of ordinary people, our future economic prosperity and national security.

Following the Prime Minister's statement to the House of Commons after his renegotiation talks at the EU Summit, Nissan's Chairman and CEO, Mr Carlos Ghosn, released this statement:

"We are a global business with a strong presence in Europe. We have a rich heritage in the UK with 30 years of manufacturing and engineering presence, and remain committed to building and engineering cars in the country. Last year we produced more than 475,000 vehicles in the UK – 80 percent of which are exported.

"Our preference as a business is, of course, that the UK stays within Europe - it makes the most sense for jobs, trade and costs. For us, a position of stability is more positive than a collection of unknowns.

"However, this is ultimately a matter for the British people to decide.

"While we remain committed to our existing investment decisions, we will not speculate on the outcome nor what would happen in either scenario."

"We obviously want the Nissan UK plant and engineering centre to remain as competitive as possible when compared with other global entities, and each future investment opportunity will be taken on a case by case basis, just as it is now."

Sharon backs the launch of Labour’s campaign to remain in the European Union, "Labour In For Britain".

The Labour In For Britain Campaign was launched by the chair of the campaign, Alan Johnson MP, on Tuesday 1st December in the Midlands and is backed by 213 Labour MPs, including Labour Leader Jeremy Corbyn and the entire Shadow Cabinet.

Labour shares the aims and principles of the cross-party campaign, Britain Stronger in Europe, however Labour will be running its own distinct campaign that stresses Labour’s case for Britain’s continued EU membership.

Britain is a proud trading country with almost half of our exports going to EU countries, worth £227 billion last year to the UK’s economy. UK jobs and businesses, large and small, depend on trade with Europe.

The UK also receives on average £26.5 billion of investment every year from other EU countries and future EU trade could create 790,000 more jobs by 2030 by opening up new markets in Europe, for British businesses, like digital services, energy and tourism.

Labour is campaigning to stay in Europe on the basis that continued membership is good for British jobs and good for men and women working in those industries.

It was Labour who made sure that Britain’s EU membership gave British worker’s rights to minimum paid leave, rights for agency workers, paid maternity and paternity leave, equal pay, anti-discrimination laws, and protection for the workforce when companies change ownership.

Following the launch of the Labour In For Britain campaign, Sharon said:

“In the weeks and months ahead, it is important that the case for our continued membership of the European Union and the benefits this brings to working families here in Sunderland and the North-East is made.

“The North-East and the wider country’s economic future depends on trading with other EU countries as a key trading partner and receiving investment from businesses who want to work within the European Union, such as Nissan.

“That is why I am proud to support Labour’s In For Britain campaign to make the case for the UK’s future as part of the European Union.”

You can watch Labour's In For Britain campaign video below or find out more on the website here.