Sharon Hodgson MP has reacted to the Chancellor of the Exchequer's Autumn Statement delivered to the House of Commons on 25.11.15

"Cuts to tax credits should never have been brought forward in the first place, but I am pleased that the pressures applied by the Labour Party and the ordinary working people of this country have paid off. The Chancellor has proved time and again that his plans simply don’t work, so it is good to see this one being reversed before it devastated the incomes of almost 6000 working families in my constituency. The real test, however, will be making sure these announcements are not simply more smoke and mirror tricks from this Chancellor, and that people do not lose out just as badly when they are eventually transferred to Universal Credit.

"Our campaign to secure continued funding for universal infant free school meals was also successful, with the Chancellor announcing it will not be cut. This is hugely welcomed, however I will be making sure that the Government sticks to and builds upon this policy, which does so much good for children up and down the country.

"On so many other areas, sadly, things are not so hopeful. More damaging cuts to essential services will continue to hurt the most vulnerable in our society, and with the Chancellor missing target after target nobody can be confident that his ideological austerity policies will even do what he plans.

"We need a balanced economy, built on investment, not on constant cuts, and a Chancellor who understands the needs of working people, which this one simply does not."

Sharon reacts to the Chancellor of the Exchequer's Autumn Statement 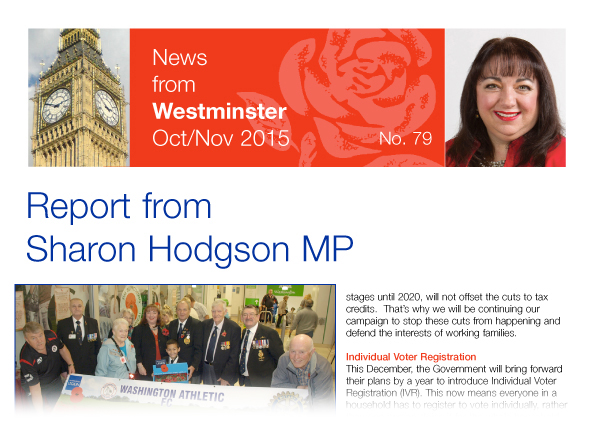 During the General Election the Prime Minister told the country the Conservatives would not cut tax credits, yet in July the Chancellor announced the changes which will come into effect next April.

I am extremely concerned about these deeply regressive cuts and the disastrous effects they will have on hard working families across Britain.

Whilst it is important to make sensible savings in social security spending, and we all want to see a higher wage economy where people are less reliant on tax credits to get by, doing this on the backs of hardworking families and pushing children into poverty is definitely not the answer.

Around 3 million families receive tax credits and almost all in-work families in receipt of tax credits will be affected by the Government's changes, losing an average of £1,300 from April. A family with one earner on average earnings and two children will lose over £2,000 in tax credits next year from the changes, and some families on middle incomes may lose entitlement to tax credits altogether.

It is also concerning that this ‘work penalty’ will increase work disincentives and that as a result of the higher tax credit taper rate, some people will only take home 7p for every additional pound they earn.

I know from the many letters and e-mails I have received that many constituents are worried about the Government’s changes. I wholeheartedly voted against the Government’s Budget in July, and against these cuts to tax credits in the House of Commons on 15th September, and I also supported the Opposition's motion on 20th October calling for the Government to drop their plans.

As a result of the concerted opposition from both inside and outside Parliament I hope the Government will now think again. The Government should listen to the voices of the millions of families across the country and reverse in full the cuts to tax credits in the upcoming Autumn Statement in November.

I can assure you that I will continue to press the Government on this extremely important matter and highlight the impact these cruel changes could have on low and middle income households in our constituency and across the country.