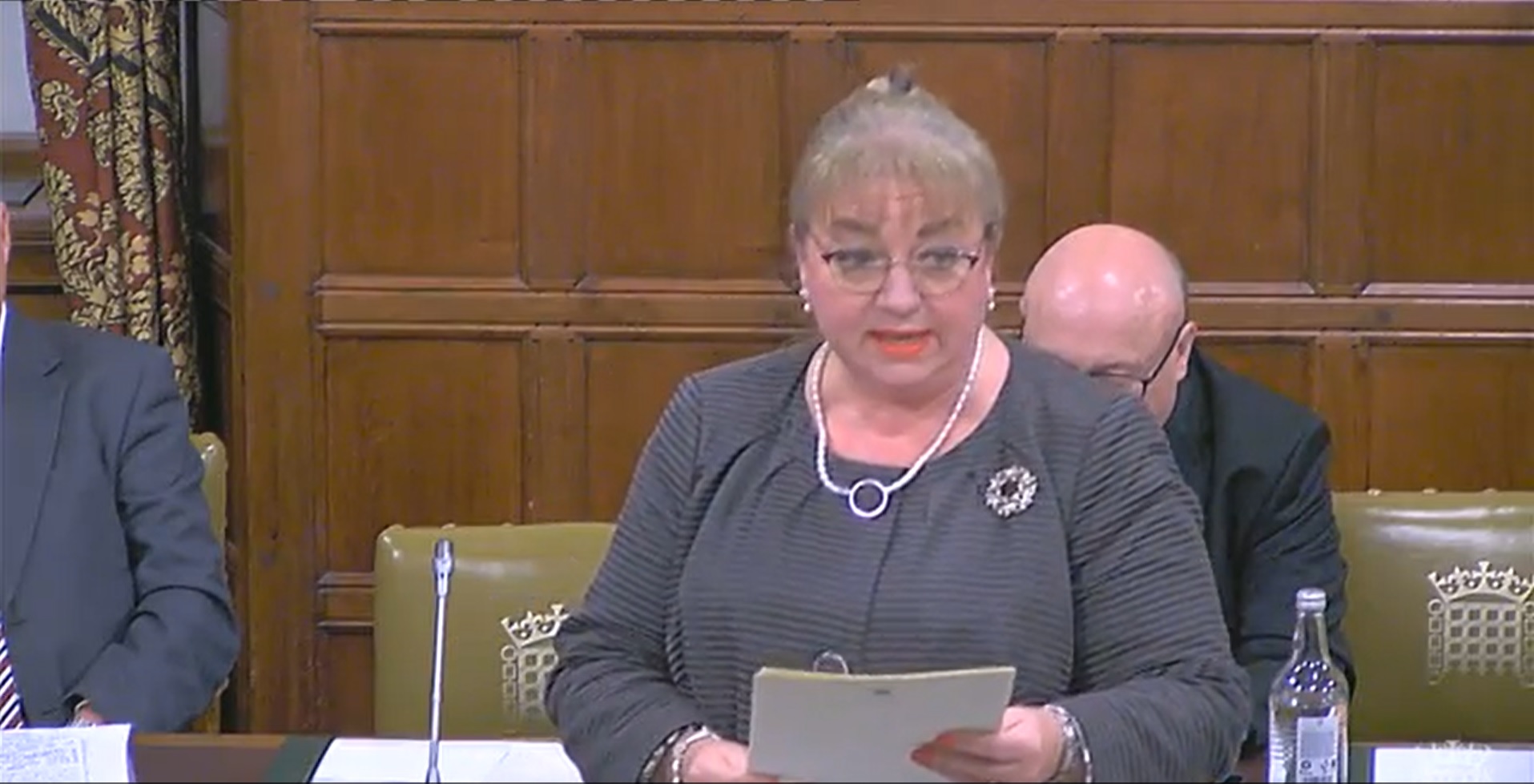 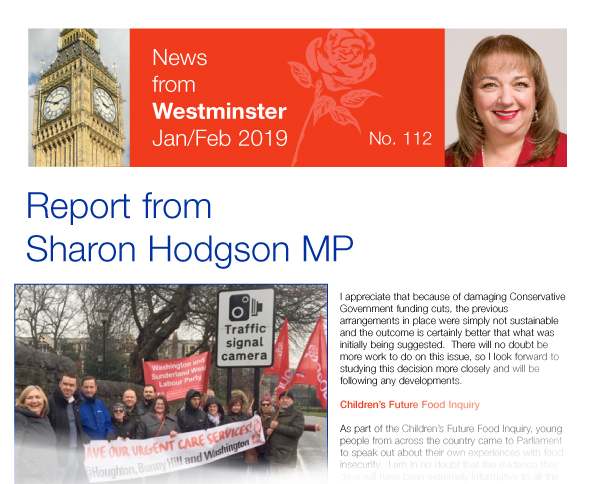 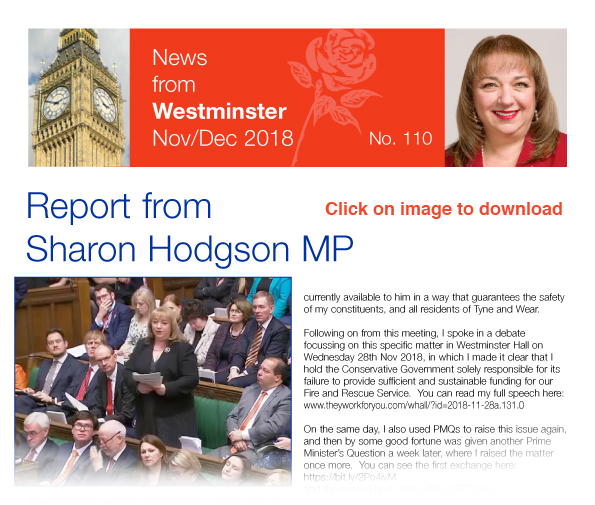 In a Westminster Hall Debate on Proposed new integrated risk management plan for Tyne and Wear Fire and Rescue Service, Sharon spoke about the funding challenges that the Service faces, and raised constituent concerns about this issue. 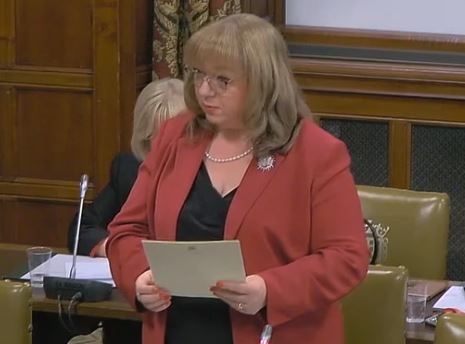 You can watch the full debate here

It is a pleasure to serve under your chairmanship, Mr Hosie. I thank my hon. Friend the Member for North Tyneside (Mary Glindon) for securing this important debate and for her excellent speech outlining the issues.

Many people in the constituencies served by the Tyne and Wear Fire and Rescue Services, whom we all represent apart from the Minister and the shadow Minister, are following this debate closely. A significant number of constituents have written to me in recent weeks to raise their concerns about the proposed new integrated risk management plan for Tyne and Wear fire and rescue service, and the ongoing cuts to fire and rescue services more widely. People will be particularly concerned about this issue in the light of troubling events in recent weeks in which firefighters have been verbally and physically attacked—I will come back to that.

It has been noted in this debate that fire services across the country have felt the significant impact of funding cuts since 2010. As a result, almost 12,000 frontline firefighter jobs have been lost, including 285 in Tyne and Wear. Tyne and Wear fire and rescue service faces a number of unique funding challenges—we have heard about them in detail—and I want to bring some particular ones to the Minister’s attention. By 2019-20, the revenue support grant will reduce by £10.8 million, to £45.8 million. Based on all current information, the authority is on course to face a cumulative funding shortfall of £3.96 million by the end of 2021-22. Doing nothing is not an option. I am sure that colleagues will agree that is a huge shortfall, especially when pressure on all our public services is increasing.

The Minister may say that there are fire and rescue services across the country whose finances are growing—we heard that from my right hon. Friend the Member for Tynemouth (Mr Campbell)—due to their ability to raise funds from business rates and the council tax precept. Unfortunately, that is another way in which Tyne and Wear fire and rescue service, along with other metropolitan services, experiences serious shortfalls in funding, and shows why a one-size-fits-all approach does not work. Although we have the highest council-tax band-D precept of all metropolitan authorities, at £79.94, the vast majority of households are in bands A, B and C. As a result, the council tax income generated by the authority is the lowest of all metropolitan fire and rescue services. That is extremely concerning.

Our communities in the north-east have suffered hugely as a result of austerity and its associated problems. It should therefore not be the case that the very deprivation that this Government have caused has the knock-on effect of preventing some of our public services from having access to the funding that they need to keep us all safe. Even worse, in areas with high levels of deprivation there is a higher risk of fire and fire-related deaths. Will the Minister take a nuanced approached when developing a fair funding model for fire and rescue services, based on risks related to deprivation and local needs? It is absolutely clear that the Government should trust local services to outline their own specific needs. Those who work for and in communities on a daily basis are best placed to know where resources are best deployed and how much they cost. Budgets allocated on the basis of scarcity alone will not provide sufficient funding.​

Like many of my colleagues here today, I recently met the chief fire officer of Tyne and Wear fire and rescue service, Chris Lowther, to discuss proposals for the new integrated risk management plan, and wider concerns about the funding available to him. He is doing everything within his power to manage the resources currently available, in a way that guarantees the safety of my constituents, and everyone across Tyne and Wear. In response to the consultation that the service is currently running, there has been some pushback from members of the public, who are understandably concerned.

Let me make it clear that I hold this Government solely responsible for their failure to provide sufficient and sustainable funding for our fire and rescue service, and I do not blame Chris Lowther, or the Tyne and Wear fire and rescue service, for trying to make the best of a very bad deal. It is particularly frustrating that services such as ours are being put in such a terrible position. They are doing everything they can to deliver their services while coming under ever increasing financial pressure, and as we know, these are not the first round of such cuts in Tyne and Wear.

I also discussed with the chief fire officer the spate of recent attacks on firefighters, which I mentioned earlier. Last year, there were 148 attacks on firefighters in the north-east, and only a few weeks ago in Southwick in Sunderland Central—the constituency of my hon. Friend the Member for Sunderland Central (Julie Elliott)—an incident took place that has been described as the worst attack of its kind in a decade. Firefighters were called to an incident in which a car was driven on to a bonfire, and they were pelted with bricks, bottles, and fireworks. The firefighters were ambushed and cordoned in by criminal “pool” cars. It is difficult to comprehend the mindset of someone who actively sets out physically to harm those on whom we rely to keep us safe, and I was pleased to see Sunderland Council back a motion just last week to call for a zero tolerance approach to attacks on emergency service workers.

The recent Assaults on Emergency Workers (Offences) Act 2018 will hopefully begin to have an impact, as the maximum sentence for such attacks has now been increased from six to 12 months. However, we must acknowledge that such things do not just happen or appear out of nowhere, and those attacks are a symptom of the underlying damage to the fabric of a community that has suffered almost 10 years of punishing austerity that has imposed cuts on all our public services. We know that when services engage with communities through education and outreach programmes, the long-term relationships that are forged can prevent such incidents from happening in future.

The successful preventive work undertaken by Tyne and Wear fire and rescue Service’s and its fast response times have, over the past nine years, reduced the number of injuries from accidental dwelling fires, and in two of the past six years it has been the only metropolitan authority to report zero accidental fire deaths. Its preventive work includes work in our communities on home safety, education and youth inclusion, and collaborative partnerships with other public services such as Sunderland clinical commissioning group and the Northumbria police and crime commissioner. I urge the Minister to ensure that all fire and rescue services are given the ​funding necessary not only to fulfil their statutory duties, but to continue engaging meaningfully with the communities they serve.

In conclusion, I wish to reiterate how important it is that the Minister listens to the concerns raised today by Tyne and Wear MPs, and to express my deep gratitude to Chris Lowther and the firefighters—some of whom are in the Gallery today—and everyone in Tyne and Wear fire service who works tirelessly day in, day out, serving our community and keeping us safe. 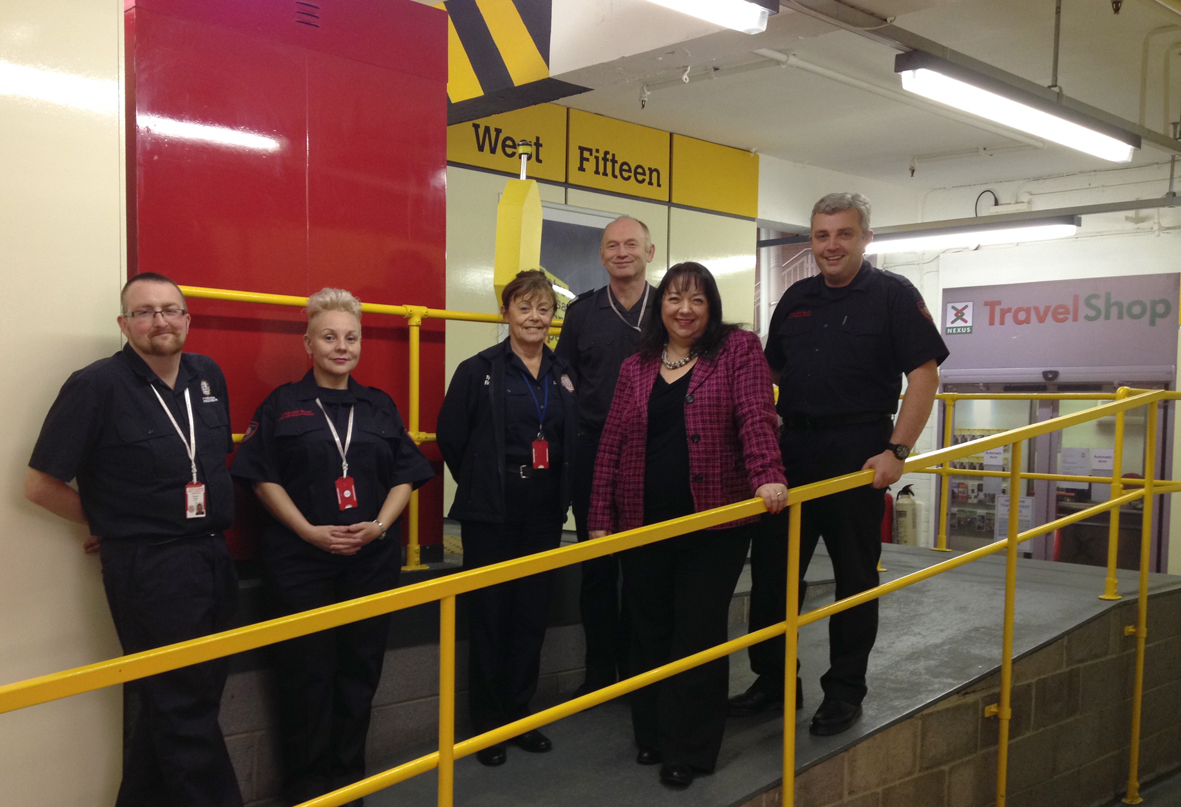 Read the full debate in Hansard >