As the Chair of the All-Party Parliamentary Group on School Food, Sharon spoke in a debate on the Government's proposals to introduce a £7,400 net income threshold for families on Universal Credit and eligibility for free school meals. In her speech, Sharon raised concerns that the threshold would see over 1 million children in poverty miss out on a free school meal. 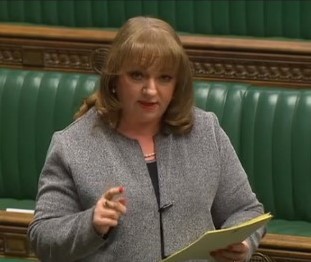 You can read the full debate here: Universal Credit and Free School Meals

These regulations will affect millions of families up and down the country, so it is only right that we are able to discuss them today. The Government consulted from November to January on introducing an earnings threshold that would restrict free school meals to families with net earnings under £7,400 per annum. The consultation received 8,981 responses. However, the Government excluded 8,421 of those responses from their analysis, meaning that fewer than 4% of respondents agreed with the Government. Surely that goes against every rule of public consultations. Talk about statistics being used against vulnerable people!

In 2010, the then Secretary of State for Work and Pensions promised in the White Paper on universal credit that it would

“ensure that work always pays and is seen to pay. Universal Credit will mean that people will be consistently and transparently better off for each hour they work and every pound they earn.”

I am glad that my hon. Friend has picked out that point. She will have heard the Secretary of State saying that jobcentres would advise people not to take extra work or to get a pay rise because they would end up worse off. Is that not absolutely contrary to the whole principle of universal credit that she has just read out?

Yes, absolutely. We know that the Government are today reneging on the former Secretary of State’s commitment.

Free school meals are worth far more to a family than £400 a year per child. That might not seem to be a lot to some hon. Members, but to those families it is an absolute lifeline. By introducing a £7,400 threshold for eligibility, the Government are forcibly creating a cliff edge that will be detrimental to families, especially children. To give just one example, someone with three children in their family who earns just below the £7,400 threshold is set to lose out on £1,200-worth of free school meals if they work only a few extra hours or get a pay rise. The Opposition’s proposal would simply remove the huge cliff edge and the work disincentive for families who most need support. It would take away the barrier to working extra hours or seeking promotion. Our proposals would therefore make work pay. The Government’s proposal is in fact the new 16 hours, which they said was a disincentive.

Is my hon. Friend aware that in Hartlepool, where universal credit is not being rolled out—it is already in—more than 1,000 children are being denied free school meals on the basis of the new proposal?

Yes. We can all cite the numbers from our constituencies. Even Conservative Members need to think about what they are doing to some of the poorest children in their constituencies. In the example I just quoted, the family’s annual wages would need to increase from £7,400 to almost £11,000 to make up for ​what they would lose by rising above the eligibility cliff edge. That problem did not occur under the old tax credit system, because that provided an offsetting income boost at the point at which free school meals were withdrawn. However, there is no equivalent mitigation under universal credit.

The Children’s Society has been much maligned today and has been cited as giving duff statistics—Conservative Members should be ashamed of themselves. It estimates that the cliff edge will mean that a million children in poverty will miss out on free school meals once universal credit is fully rolled out. They will miss out on something that is crucial for their physical and mental development.

The Government have said that 50,000 more children will benefit by the end of the roll-out in 2022, when the transitional protections are at capacity, but I and many others struggle to understand how that can be the case. Parliamentary questions tabled by my hon. Friends and others have gone unanswered, and the Government cannot just pluck figures out of the air, as they claim so many others have done. At least we can back up our claims with evidence from the Children’s Society, Gingerbread, the Child Poverty Action Group and Citizens Advice, all of which agree that this statutory instrument would take free school meals away from a million future children—[Interruption.] It would. If the SI does not come into force, a million more children will receive free school meals—[Interruption.] Conservative Members can shake their heads all they like.

During my recent Westminster Hall debate, I offered Ministers a solution that would mean that all children in universal credit households would continue to receive free school meals. As somebody asked earlier, I can say that it would cost half a billion pounds—not a huge cost to feed over a million of the poorest children. My proposal would see around 1.1 million more children in years 3 and above from low-income families receiving free school meals compared with under this change.

If we were to maintain free school meals for absolutely everybody on universal credit, does the hon. Lady think it would be right to prioritise those coming from the legacy tax credit system, who could be earning up to £50,000 a year, instead of opening up eligibility and getting free school meals to more children in poverty?

I am running out of time, so— [Interruption.] Perhaps Conservative Members would let me finish before they use up all my time. I was going to say that while I cannot go into the full details, because of the time, I understand from the Children’s Society that that is a small number of people—up to 40,000—and that those people are often in large families with severely disabled children. The large amount of money is down to how much they receive for those children. It is disingenuous to use that as an example and to make out that all those families are receiving £50,000.