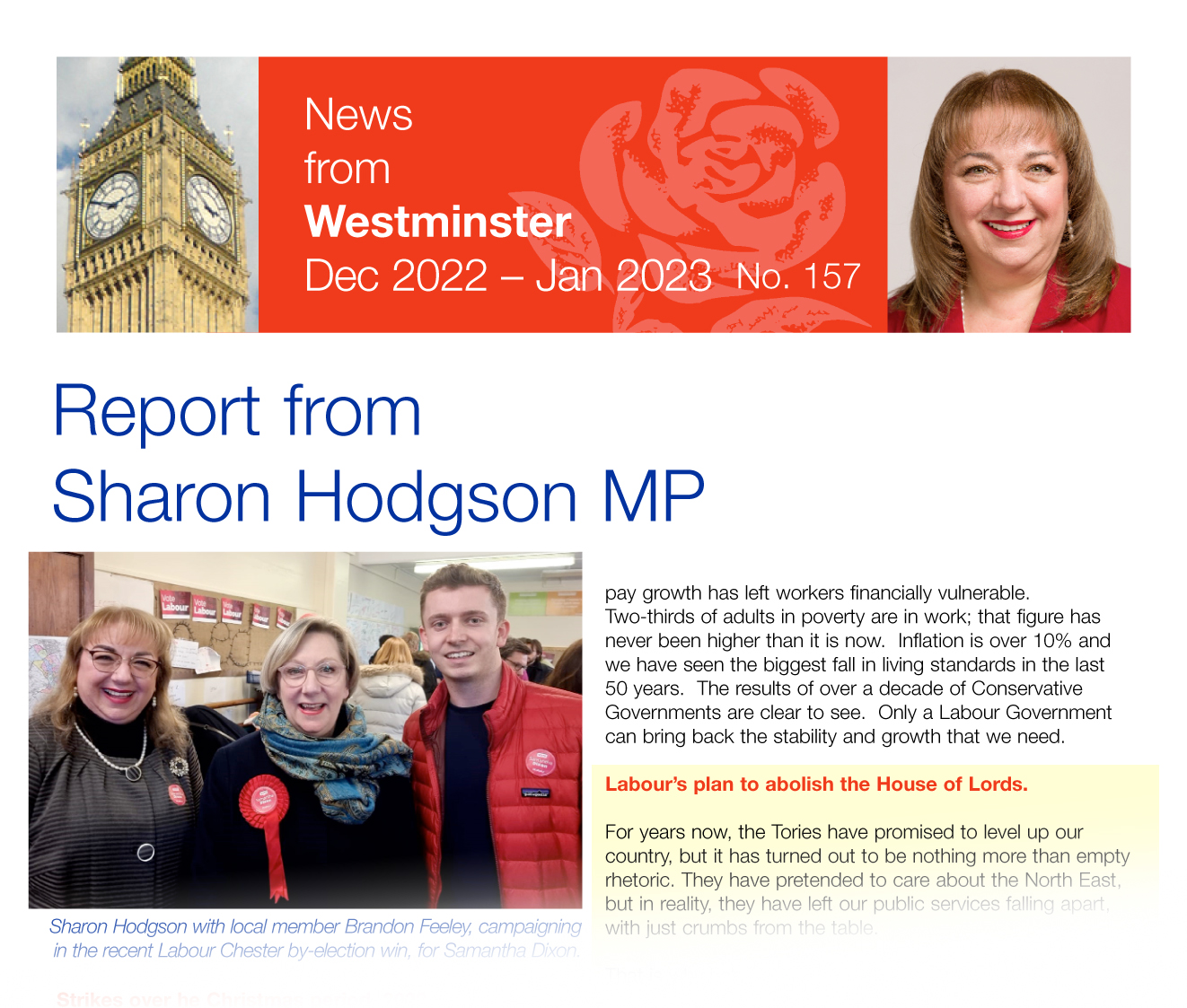 Welcome to my monthly online report - which details some of the highlights from Westminster and the constituency.

New data from the NHS has shown that more people are waiting a month for a GP appointment than at any time since when records began in 2017.

1,988 people in Washington and Sunderland West faced a wait of 28 days or more to see a GP in October alone.

A further 5,503 people had to wait more than two weeks.

Almost two million people in England had to wait more than 28 days in October, while a further 4.3 million had to wait more than two weeks. At the same time, the number of GPs has fallen to a record low, leaving patients in a desperate scramble to be seen. Since 2013, 4,600 GPs have been cut.

The findings come as MPs prepare to vote on a motion proposed by the Labour Party to abolish the non-dom tax status, which allows some wealthy people who live in Britain to pay their taxes overseas, to pay for training a new generation of NHS staff. Labour’s plan would:

Labour’s plan will see patients guaranteed a face-to-face appointment with a GP if they want one. While some patients prefer to hold appointments over the phone, many are frustrated at not being able to see their doctor in person, and just 22% of patients are given a choice in the type of appointment they have. One in seven people who try to speak to a nurse or GP were unable to get an appointment at all last year.

Labour is also pledging to bring back the family doctor, so patients can see the same GP each appointment if they choose to. Patients are increasingly unable to see the doctor of their choice, with two in every three patients rarely or never speaking to their preferred doctor, up from just half in 2018. Under Labour’s plans, GP practices will be provided with incentives to offer patients continuity of care, so doctors must take into account patients’ preferences

“I recently held a public meeting in which residents consistently voiced their concerns around NHS waiting times with many patients in my constituency finding it impossible to see a GP when they need to. Among those thousands waiting more than a month to get a GP appointment or not getting an appointment at all, there will be conditions going undiagnosed until it is too late.”

“12 years of Conservative failure to train the staff our NHS needs has left it with thousands fewer GPs, and patients are paying the price. Meanwhile the Conservatives are protecting the non-dom tax status, allowing people who live in Britain to pay their taxes overseas. We need more doctors and nurses, not non-doms.

“Labour will train a new generation of doctors and nurses, paid for by abolishing non-doms. Patients need doctors’ appointments more than the wealthiest need a tax break.

“Patients should be able to see the doctor they want, in the manner they choose, when they need to. Labour will put patients first and get them seen on time again.”

1,988 Patients made to wait over a month for a GP appointment in Washington and Sunderland West.

New data from the NHS has shown that more people are waiting a month for a GP appointment than at any time since when records began in 2017.1,988 people in... 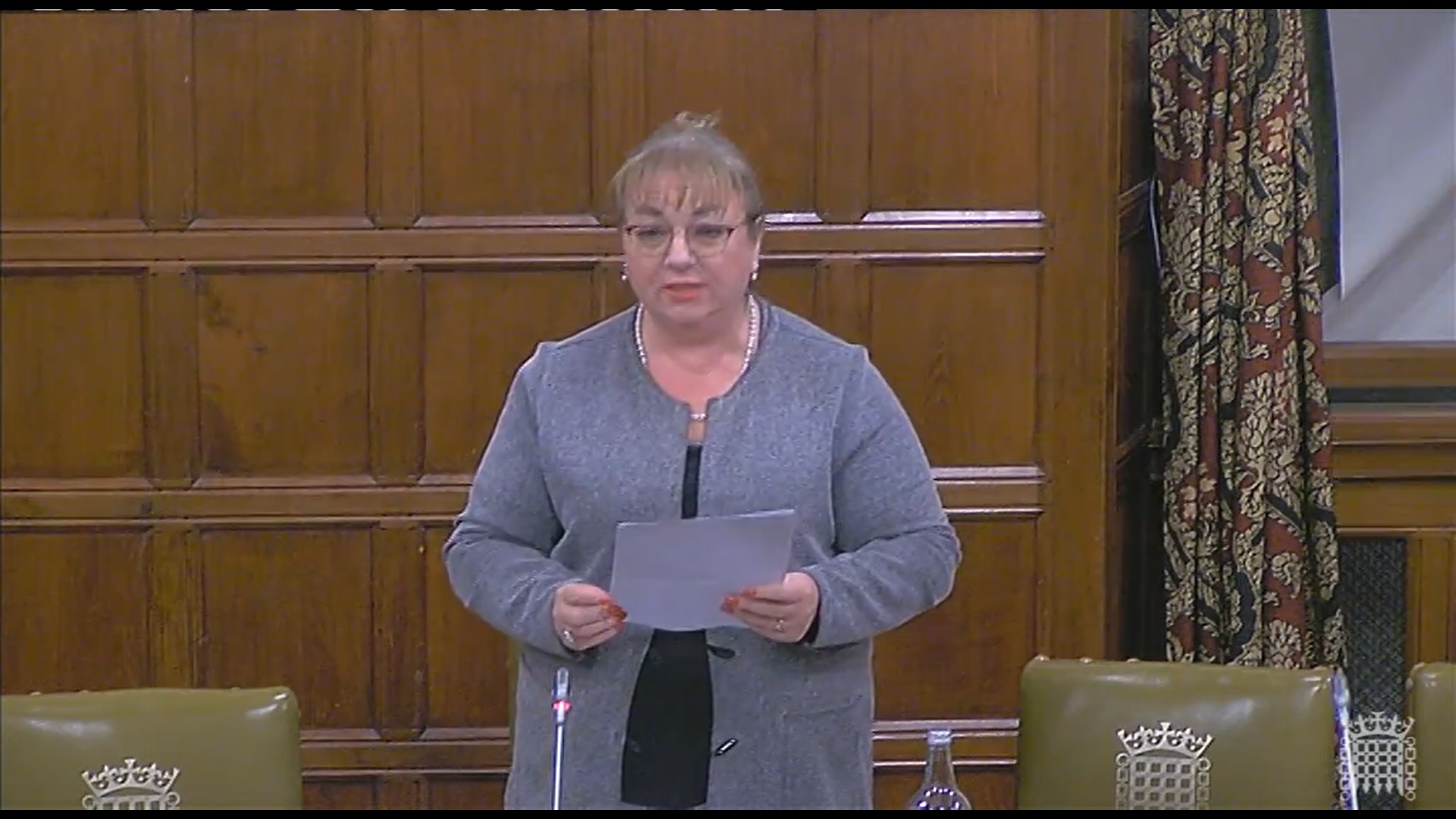 It is an honour to serve under your chairmanship, Ms Harris. I congratulate the hon. Member for Stoke-on-Trent Central (Jo Gideon) on securing this important debate and giving us the opportunity to discuss the next wave of dormant assets and the possibility of establishing a community wealth fund.

I am proud that in 2008 the Labour Government passed meaningful dormant assets legislation, which began to unlock this crucial source of funding from financial assets such as bank accounts. Although it is important to reiterate that the priority is trying to reunite assets with their owners, where that is not possible the money goes to causes that facilitate real change in our communities. This policy raised over £800 million of funding to support social and environmental causes across the UK, so I am proud of the work that parliamentarians across the House, including many members of the APPG for ‘left behind’ neighbourhoods, have carried out. I am pleased that this proposal, in particular the creation of the community wealth fund, is being considered by the Government. However, it is important that this matter is not just considered; it must actually amount to meaningful change.

In England, funding from dormant assets is restricted to youth work, financial inclusion and social investment. It would be good to see that expanded so that the money could be used to finance a wider range of community projects. The design of the proposed community wealth fund has been informed by the success of the Big Local programme. The 2020 evaluation of the programme found that

“The concept of putting residents at the very heart of that change is showing its value up and down the country.”

A community-led approach means that local priorities and desired outcomes would be determined at local level by the people who live there. The importance of that cannot be overstated.

I want to use this opportunity to highlight the important research conducted by the Oxford Consultants for Social Inclusion, in collaboration with the APPG, which identified 225 left-behind neighbourhoods. These neighbourhoods face significant deprivation, as we heard from the hon. Member for Stoke-on-Trent Central, as well as poor connectivity and lower levels of community engagement and activity. That is especially poignant to me as the neighbourhoods identified include St Anne’s and the Washington North ward in my constituency. For example, in St Anne’s, there are only 25% of registered charities per 1,000 people compared with the English average.

Away from these statistics, I know at first hand the difference a community wealth fund would make in Washington and Sunderland West. This funding pot, which is now estimated to be £880 million, would be transformative in building community confidence and provide the foundations to enable the residents of the most left-behind neighbourhoods to bolster their social infrastructure. Consistent with this, the wards most in need of investment would receive awards, as opposed to having to compete for funding. That would be the right approach. Bids for levelling-up funding and freeports have pitted the poorest in our society against each other, rather than focusing on those in greatest need.

A number of hon. Members in the Chamber were at a meeting of the APPG just last week. I have co-chaired a couple of the meetings of the APPG’s inquiry into levelling up, in which we heard about the power of local communities to take action to improve outcomes for local people, for instance through award-winning community mental health programmes for young people, or through support to strengthen the local economy and support jobs and businesses. Levelling up seems to be cosmetic: if we move people from the bottom rung to the second rung from bottom, we can claim to have succeeded. Labour wants equal opportunity for every part of the country. The APPG inquiry shows that communities can develop themselves despite Whitehall neglect, so imagine what communities like mine could achieve with access to the appropriate resources and long-term support under a Labour Government.

The government is consulting on the best use in England of the next tranche of dormant assets, including a Community Wealth Fund as a potential new beneficiary. The co-chairs of the APPG for 'left behind' neighbourhoods have made a submission backing the Community Wealth Fund, setting out how it meets the government's essential and desirable criteria for a new cause.

4.51pm - Mrs Sharon Hodgson (Washington and Sunderland West) (Lab) It is an honour to serve under your chairmanship, Ms Harris. I congratulate the hon. Member for Stoke-on-Trent Central (Jo Gideon)...