Sharon Hodgson joined cross-party calls for an end to puppy farming and higher welfare standards for puppies and kittens during a Parliamentary debate. 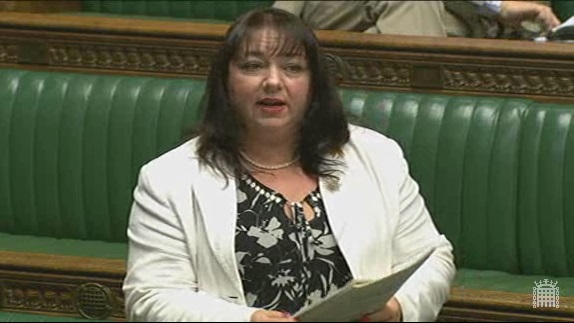 Puppy farming is the name given to the intensive breeding of dogs for commercial purposes. Puppies coming from these farms are usually unvaccinated and therefore can be seriously ill when they eventually go home with their unwitting new owner.

The MP, who told the House of her love for her rescue dog Leo, echoed calls made by a number of animal welfare charities and TV vet Marc Abraham for a review of Government legislation regarding breeding to shut down such operations, and an end to puppies and kittens being torn away from their mothers to be sold in pet shops and through other online dealers.

During her speech Sharon said: “We simply cannot see dogs or kittens as commodities…They are future members of our families, future best friends for our children and future companions for us when our children flee the nest. They are sentient beings, with similar feelings and reactions to us.”

In responding to the debate, Environment Minister George Eustice MP reiterated that local authorities should do all they can to monitor the breeding and sale of pets in their area, but ruled out further action from the Government to ensure consistently high welfare standards across the country.

Speaking after the debate Sharon said: “There was clear cross-party agreement in this debate that it’s simply not acceptable to tear puppies and kittens away from their mothers before they’re ready – not only can it cause health problems, but it can fundamentally affect the nature of an animal we take into our homes and place a great deal of trust in.

“I’d therefore recommend to anyone looking for a new puppy or kitten to make sure they see them interacting with their mother before they buy them.”

“Labour is committed to working with animal welfare groups to have a more meaningful review of the legislation around dog breeding if we form the next Government, and we’ll continue to pressure the current Government to do more in the meantime.”