As Shadow Minister for Public Health, Sharon opened a General Debate in the House of Commons on acquired brain injuries.

During her speech, Sharon highlighted that although more and more people are surviving and living with a brain injury, this puts increased pressure on vital services, such as Neuro-rehabilitation. Sharon also praised the work of Headway Wearside, who provide support for people living with acquired brain injuries and their families. 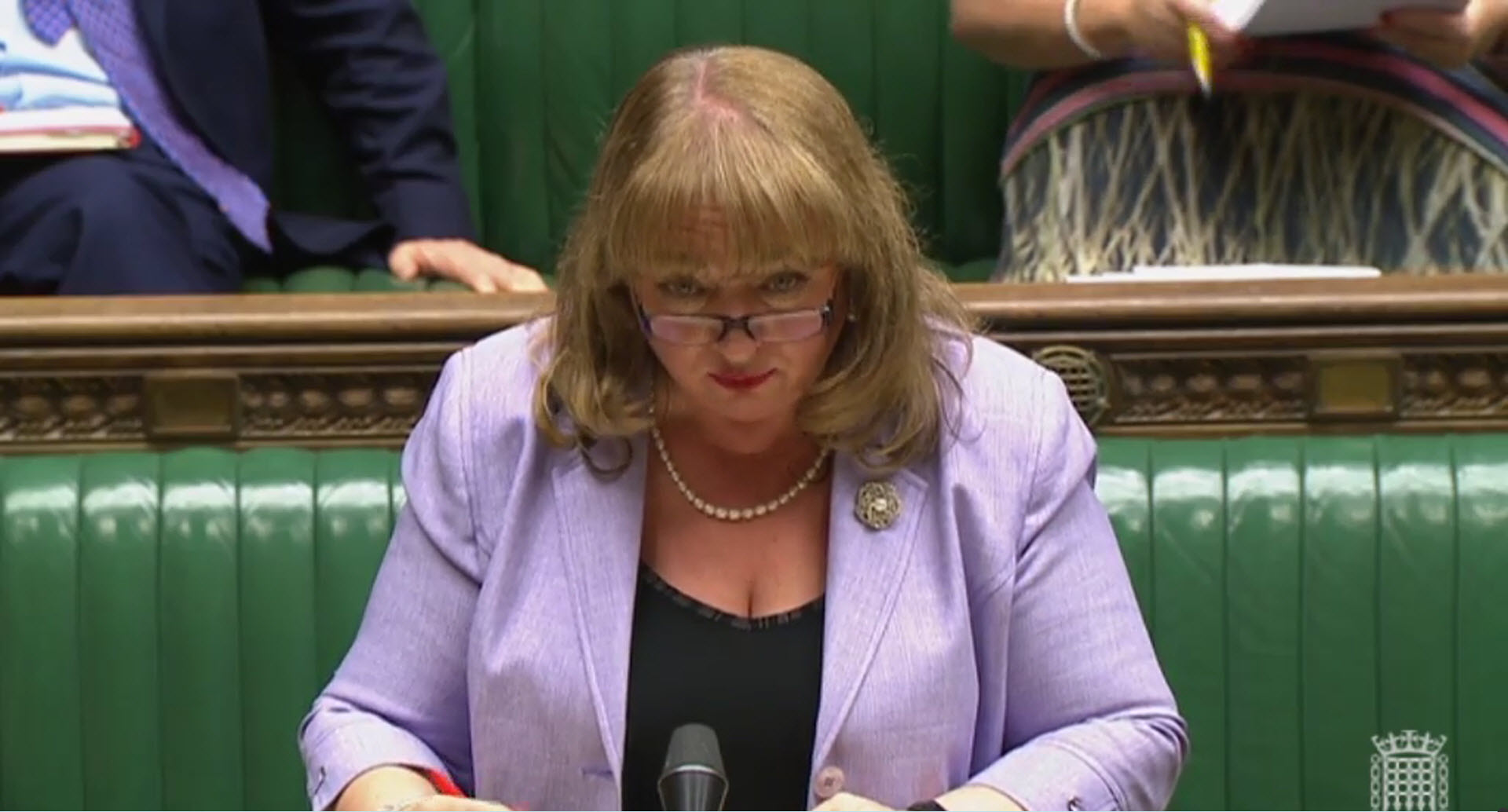 Thank you, Madam Deputy Speaker. That is now in Hansard. I am sure the Minister will enjoy it in the months and years to come.

It is an honour to speak in this very important debate, and I thank the Government for allowing the time for it. I pay tribute to my hon. Friend the Member for Rhondda (Chris Bryant) for calling for it and for his tenacity in ensuring it went ahead, against all the odds, when we all doubted it would and even though we are very pushed for time. I thank the all-party group on acquired brain injury and the right hon. Member for South Holland and The Deepings (Mr Hayes) for all their work and for their excellent campaign for better support and recognition for people living with ABI. I join the Minister in praising the work of the late and great Baroness Jowell. I, too, will never forget her last appearance in this Chamber in the Under Gallery.

Last month, along with colleagues from across the House, I was pleased to attend the rally for people with acquired brain injury at which they, along with their families, friends and carers, talked about their conditions and the services available to them. As we have heard, 1.3 million people in the UK live with the consequences of ABI, and each year approximately half a million patients attend UK emergency departments for traumatic brain injury. That is nearly 1,500 patients with traumatic brain injury attending A&E departments in the UK each day; one every minute. Brain injury can happen to anyone at any time, and all Members will have constituents living with the consequences of an ABI.

Despite the fact that so many people are living with ABI, it is little understood, which is why I am so pleased that the time has been allowed to discuss it in this place this evening. A brain injury can happen in an instant, but its effects can be devastating and last a lifetime. Thankfully, due to excellent advances in emergency and ​acute medicine, more and more children, young people and adults now survive and live with an ABI, but this brings its own challenges. As ever more people survive an ABI, further pressure is put on the vital services that people require.

For example, many individuals with an ABI require early and continued access to neuro-rehabilitation to optimise their recovery. The United Kingdom Acquired Brain Injury Forum says that the average cost of the initial rehabilitation programme is offset by savings in the cost of ongoing care within just 16 months and that this leads to an average saving over a lifetime in care costs of £1,475,760. That is a huge amount of money. Neuro-rehabilitation is therefore one of the most cost-effective services the NHS provides and one of the few services in medicine that result in long-term decreased costs to the economy. However, as is the case for many health conditions, the number of available beds across the UK is inadequate, service provision is variable and consequently long-term outcomes for brain injury survivors are compromised. What plans do the Government have to address those issues and improve the lives of patients living with an ABI? The UKABIF recommends a review of neuro-rehabilitation to ensure that service provision is adequate and consistent throughout the UK. Does the Minister agree that that is needed?

Many children and young people with an ABI are in education, and therefore the majority will receive most of their rehabilitation at school. Yet among education professionals there is a lack of awareness and understanding of ABI, its consequences, and its impact on learning. A pupil with an ABI may also require extra support when transitioning between primary, secondary and further education. What discussions has the Minister had with his colleagues in the Department for Education to ensure that children with an ABI receive the support that they need throughout their journey through the education system? Will he discuss with them the inclusion of ABI in the code of practice for special educational needs co-ordinators?

Brain injuries can be difficult to detect for people who are not already aware of them, which is why all education professionals should have a minimum level of awareness and understanding of ABI. In fact, that requirement goes beyond education and into everyday life. People living with ABI are discriminated against because of the general lack of understanding of their condition. For example, earlier this year Grace Currie was escorted out of a pub on a Saturday night because the bouncers believed that she was “too drunk”. In fact, Grace, who had suffered life-changing injuries after being hit by a car in 2010, had had just one drink. The incident must have been extremely upsetting and embarrassing for Grace, and I am sure that it really knocked her confidence.

Sadly, such encounters are not rare, and the level of misunderstanding of brain injuries is high among the general public, including assessors for employment and support allowance and personal independence payments. A study conducted by Headway found that 71% and 60% of respondents felt that assessors for ESA and PIP, respectively, did not have an understanding of brain injury. Further, assessors were widely reported to lack empathy and patience, resulting in a stressful and even traumatic experience for many brain injury survivors. Many respondents also said that their medical evidence ​was not taken into consideration, and that the assessment location and environment were not suitable for them, despite requests made in advance. Consequently, a strong sense of frustration and anxiety was reported by brain injury survivors and their carers about the failure to recognise or respect their needs throughout the application process. Has the Minster had any discussions with his colleagues in the Department for Work and Pensions about that issue? Will he look into those concerns with his colleagues, and ensure that they are properly addressed?

Living with a brain injury is difficult enough for people without their having to struggle to explain and prove their disability to anyone who lacks understanding of the condition. Each brain injury is different, which is why it is so important to raise awareness of ABIs. However, it is also important to recognise that such injuries affect not just the people directly concerned, but their families and friends. Headway aimed to highlight that during brain injury week last month for its “you, me, and brain injury” campaign. Headway found that 69% of brain injury survivors reported breakdowns in their friendships after the injury, and that 28% of relationships ended after an ABI. However, it is not all doom and gloom: 47% of survivors reported improvements in their relationships with family members. It was clear from Headway’s study that a little bit of understanding and time really can go a long way. That is the kind of service that is provided by its 127 groups and branches across the country.

Headway Wearside, whose representatives I met recently at the rally in Parliament, provides information, support and social activities for brain injury survivors, and works with the local community, relevant professionals and organisations to promote understanding of ABI. I spoke to Neil and Jimmy, who use the Headway Wearside service, and was touched when they explained that Headway had brought them together as a community, and they had formed friendships that they never expected to form. Headway Wearside does not just teach new skills, but helps people to form and develop friendships at a time when doing so might otherwise be hard. When I met with Neil and Jimmy we feared that this service might soon be lost, and I am pleased to say that it has been extended to June 2019, and I hope it will be extended still further so that patients can have access to this life-changing service. I pay tribute to Headway Wearside and all the work it does for the local community, and I will continue to support it so that this vital service can continue to support its 4,000 patients.

My wife suffered exactly this problem in 1999. The eldest of my three children was sitting her exams—her highers—at school, and while that school and the education system in general supported them fantastically well, there is the issue of supporting the children, quite apart from supporting the sufferer of an injury like this. Will the hon. Lady elaborate on how we might increase the support and help for families caught up in such situations? My children got through it, but it was touch and go, and I remember these events without much happiness.

I thank the hon. Gentleman for sharing such a personal anecdote from his own experience. It demonstrates why it is important that we support the Headways across the country that are giving this vital ​support to families in the position his family was in, and he is right to mention the children of people with acquired brain injuries; they must not be forgotten in all of this.

Unfortunately, not every patient with an ABI will have access to a service like Headway Wearside. If the Minister is to take away one thing from this debate, I urge him to recognise the need for services such as Headway Wearside and the other 126 across the country, so that the more than 1 million people living with a brain injury can access the support they need and deserve.