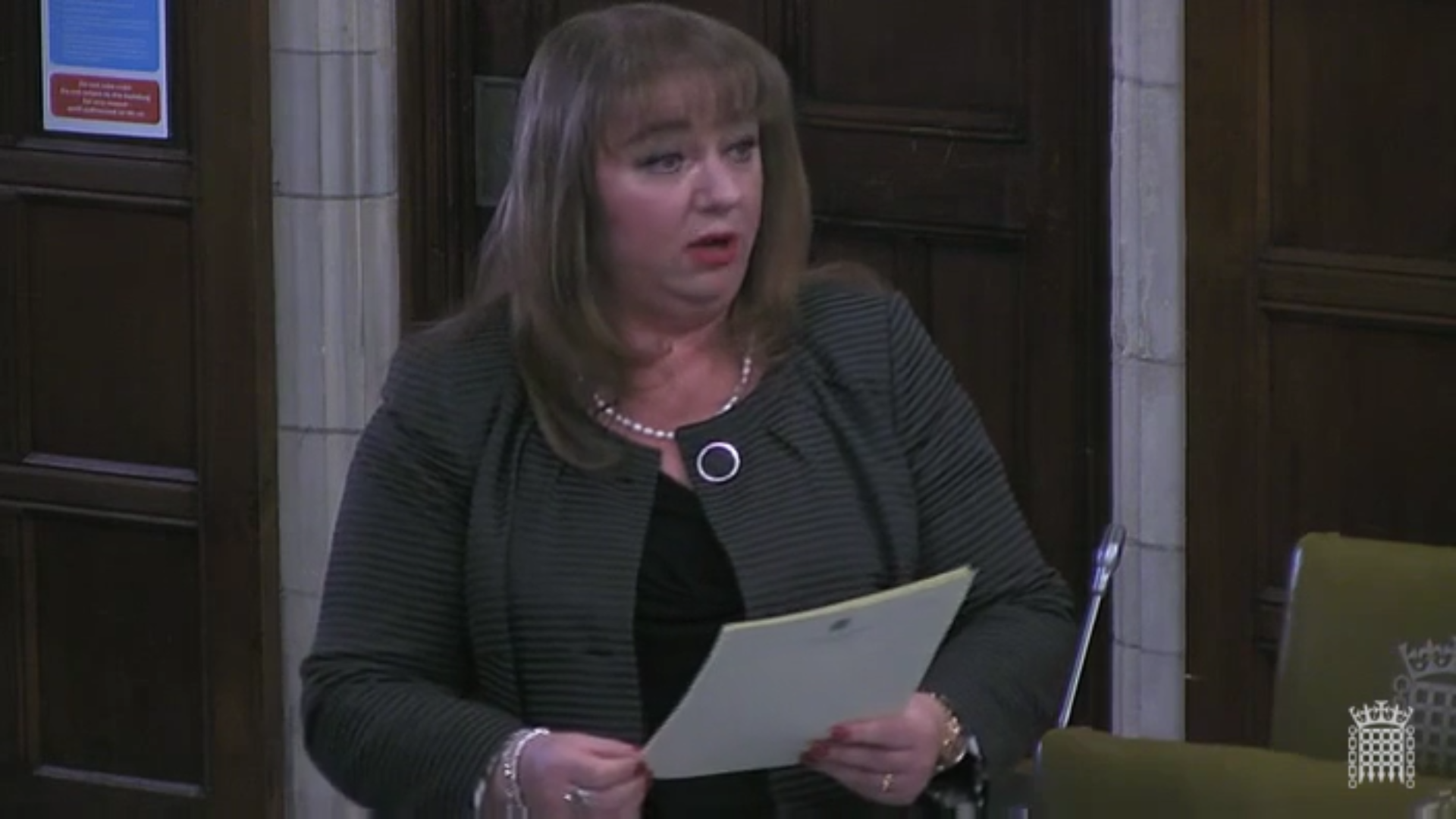 Sharon speaking in the Westminster Hall Debate on Children's Homes 19.04.16

As Shadow Minister for Children, Sharon spoke in a Westminster Hall debate focused around the pending Sir Martin Narey review into looked-after children's residential care, and highlighted concerns with out-of-area placements and the criminalisation of looked-after children.

It is an honour to serve under your chairmanship, Mrs Gillan. First, I want to thank my hon. Friend the Member for Stockport (Ann Coffey) for securing this important debate this afternoon. She is probably the most knowledgeable MP in the House on this issue. As she said, she spoke on this issue in the House more than 21 years ago, and it could be quite frustrating for her that 21 years later she is still raising some of those same issues. It shows her tenacity that she has not given up and, hopefully, we might see some movement this afternoon. We live in hope.

We have heard thoughtful contributions this afternoon from the hon. Member for North Ayrshire and Arran (Patricia Gibson), from my hon. Friend the Member for Rochdale (Simon Danczuk), and from the hon. Member for East Renfrewshire (Kirsten Oswald) who is a Front-Bench spokesperson for the Scottish National party. We have had very thoughtful contributions. Debates are sometimes disappointing. I was in the debate on brain tumours yesterday and there was standing room only. I would not like to think that this debate is any less important than one that needs to have large numbers of people contributing, but let us hope that in our contributions today the quality will outweigh the quantity. I also thank the hon. Member for Telford (Lucy Allan) for her interventions.

What comes across very clearly is that we are sending a message to Sir Martin Narey—the hon. Member for Telford mentioned him—before the publication of his review that we hope to see reforms that will support and improve the lives of looked-after children in residential care. This debate has been on the wider aspects of the ​Narey review, but there are two areas that I wish to touch on this afternoon: out-of-area placements, as described by my hon. Friend the Member for Stockport, and the criminalisation of looked-after children.

Ever since the passing of the Children Act 1989, there has been a strong statutory duty on local authorities to place a child who enters the care system in the local authority area and ensure that their needs are met. However, guidance released by the Department last summer stated: “There will be circumstances where a distant placement will be the most suitable for a child”.

Since then, there has been a clear trajectory in Government thinking that has raised the many concerns eloquently highlighted by my hon. Friend the Member for Stockport. It is important that children receive the best care possible and, in certain circumstances, that may mean that an out-of-area placement is necessary to meet their needs. However, there is no conclusive evidence to support that strategy becoming wider practice. That is why the evidence that was used to come to the Government’s conclusion must be clarified.

Until out-of-area placements’ effectiveness is made clearer, it is important that they do not become the norm, yet when we see more and more children living more than 20 miles away from what they define as their home—their local area—it is not hard to believe that this is now becoming common practice. Recent Department for Education figures show that since 2010 we have seen an increase of over 20% in the number of children placed out of area, which now totals 17.9% of looked-after children. We need to unpick why that is happening, and I hope that the Minister will clarify what is going on in his response to this debate.

We know it is not the case that all local authorities have a children’s home within their boundaries. Many are based, as we have heard, in the west midlands, the south-east and north-west. This is an issue of infrastructure, and I hope that that will be addressed in Sir Martin Narey’s review.

One example of how care homes work, which I believe should be considered by the Government, is the Scandinavian and Germanic model of residential care, with smaller children’s homes with highly educated social pedagogues in charge. This idea of social pedagogy was backed by the “Care Matters” White Paper in 2007, which finally took it out of the confines of academic discourse and brought it into practical policy development. It included a recommendation to pilot a model in England to gather more evidence. A pilot was commissioned by the Social Education Trust and managed by the National Centre for Excellence in Residential Child Care, a specialist unit under the watchful eye of the National Children’s Bureau.

Reviews of the pilots found that residential care staff welcomed the holistic and child-centred approach that social pedagogy could have on real change to the lives of children in residential care. The idea was backed as a valuable way to work in our residential care homes by the then Department for Children, Schools and Families in its looked-after children report in 2009. However, we have unfortunately seen this important step forward put on the back burner since the Government came to office in 2010. I am therefore interested to hear what assessment the DFE has made of how much this would cost and ​whether it is feasible for the UK. It is clear that the model is working in other countries, and it was welcomed here during the pilots, so an assurance by the Minister to look into this further, as the previous Labour Government had done, would be welcome.

For some children, residential care is the best option to meet their needs, but what is best for children is being in an environment that they know. To rip them away from some of the only constants in their life, including their school place and links to positive support from family—let us remember that not all family members of a looked-after child are irresponsible—can be damaging. In addition, reduced access to social workers and other support services that they have grown accustomed to can be damaging.

It is also concerning when the private sector gets involved and fails to market the services correctly. In a recent case, a looked-after child was moved from Oxfordshire to an expensive placement in Wales, and sadly committed suicide shortly after arriving. The serious case review investigation identified the fact that the quality of the provision on offer was not what had been marketed at all.

Although removing a child from influences such as gang violence or sexual exploitation are honourable and necessary, there is a need to support a child to manage risks and build personal resilience in their home area, especially when many of them return there once they have left a children’s home. Can we blame them? It is the place they know best, where friends and family are, and we all have that homing instinct within us, after all. The Challenging Behaviour Foundation recently came out strongly against out-of-area placements, and it has lobbied for more investment in local communities and areas. That included making the case for renting a home in a child’s local area and supplying staff for children on a one-to-one basis, which is not dissimilar to the Scandinavian model that I mentioned earlier.

Many serious questions about out-of-area placements arise, including the involvement of private companies in the system, which must be addressed urgently by the Government. There is no better time, especially with the review pending, for the Government to take the bull by the horns and make significant strides in reforming the provision on offer to looked-after children. I hope that the Government anticipate that all the issues I have mentioned will be addressed in Sir Martin’s review. However, I hope that another area, which has recently been brought into the public debate, will be considered: the criminalisation of children in residential care.

Recently, the Howard League for Penal Reform released data that showed there had been more than 10,000 police call-outs to residential settings. That is more than two for every child in residential care, and many of the call-outs concerned the most minor of incidents. An excellent report from the Standing Committee for Youth Justice, by Claire Sands, entitled “Growing Up, Moving On”, deals with the long-term effect of even minor offences becoming a criminal record that is never wiped clean. The criminalising of children in residential care is deeply concerning for children who are negatively labelled in many ways before they reach adulthood. If we add “criminal” to that list, we are burdening them further ​with a label that will impede any life chances that may come their way as they move into adulthood. There are some pertinent examples in “Growing Up, Moving On”, which I encourage hon. Members and the Minister to refer to. I hope that the Government are considering that issue seriously and that they will provide strong guidance to residential care homes to prevent further damage to the lives of children and young people by the very system that is trying to help and care for them.

We all want children, no matter what their background, to have the best start in life. That belief should be central to any reforms that affect the lives of children, and I hope that the Government will not squander the opportunity presented by Sir Martin’s review to take significant steps towards achieving that. I look forward to reading the review when it is published, and will continue to press the Government to keep the improvement of looked-after children’s lives at the heart of everything they do, ensuring that they are protected and nurtured and live a happy childhood, just like their peers.