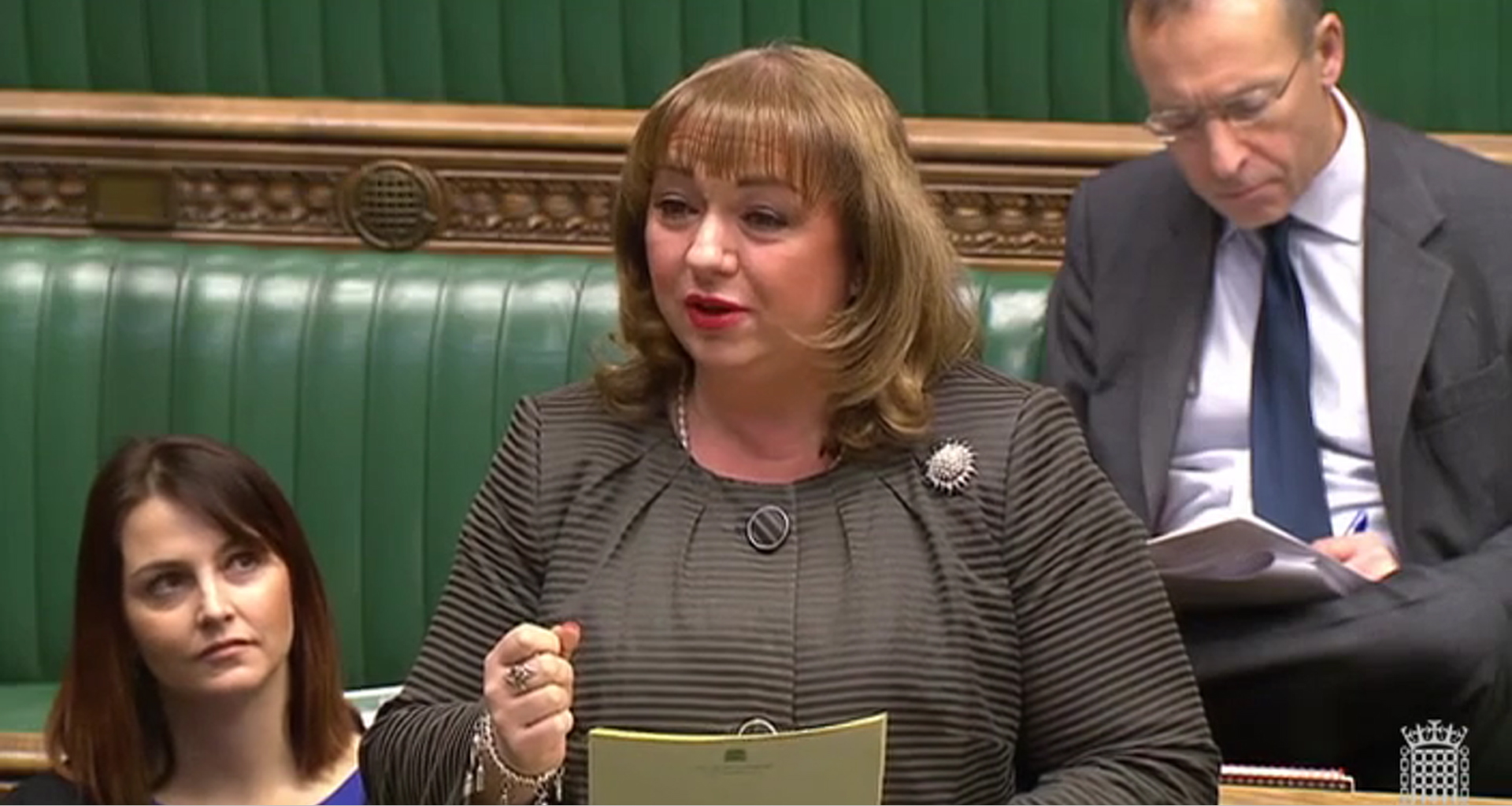 During the 2nd Reading of Tim Loughton MP's Civil Partnerships, Marriages and Deaths (Registration Etc.) Private Members Bill, Sharon made a personal speech specific to a section of the Bill which would called for a review into providing birth and death certificates for stillborn babies before the 24 week gestation threshold. In her speech, Sharon spoke about her experiences 20 years ago of giving birth to her stillborn daughter, Lucy, and not receiving a birth or death certificate for her.

You can read the full debate in Hansard by following this link: Civil Partnerships, Marriages and Deaths (Registration Etc.) Private Members Bill 02.02.18

It is an absolute pleasure to follow the hon. Member for Banbury (Victoria Prentis), whom I am proud to call my friend. The work we have done together on the all-party group on baby loss is an exemplar of cross-party working at its best.

I welcome this Bill, presented by the hon. Member for East Worthing and Shoreham (Tim Loughton), and support all four parts of it wholeheartedly. However, this morning I will speak about just two, one which I will discuss briefly and another which is of great personal significance to me. First, I welcome the measures in this Bill that would legislate to equalise civil partnerships and open them up to heterosexual couples. As we all have, I have had many constituents contact me about that in recent weeks, and I am happy to support the measures the hon. Gentleman proposes.

Now I come to the main topic I wish to talk about this morning. I remember, when the hon. Gentleman sent an email around notifying us all of his intentions with this Bill, being really hopeful when I saw the provision to register stillbirths who are born under 24 weeks’ gestation. I hope the hon. Gentleman does not mind my quoting his email, in which he said:

“Currently a child born to a mother who goes through the whole process of labour but is stillborn after 23 weeks for example, is treated no differently to a miscarriage…Both are traumatic and we need to do more to support families affected in this way but the failure by the state to acknowledge that a child born this way ever existed effectively surely just adds insult to injury.”

When I received that email and read that paragraph, initially it floored me, because it was me he was describing. That was exactly my experience with Lucy, my third child, and I am sure I used similar words to describe how it all felt in my intervention in the baby loss debate in 2016.

Lucy was born at 23 and a half weeks, and sadly she was stillborn. I mentioned Lucy for the first time in Parliament during the powerful baby loss debate during Baby Loss Awareness Week in 2016. That was 11 years after I had been elected. I said at the time how much I admired—and I still do—my fellow officers of the all-party group on baby loss, who led the debate that day. The year before, the hon. Members for Colchester (Will Quince) and for Eddisbury (Antoinette Sandbach) had spoken in detail about their loss in a groundbreaking Adjournment debate, which I watched from the safety of my office because I was too scared to be in the Chamber because I knew how emotional I would get listening in the Chamber. The fact that they were on their feet talking about it just astounded me, because I had never felt brave enough or strong enough to do what they did. I still find it very difficult, even now, all these years later, to talk about it.

Will Quince (Colchester) (Con)
I thank my friend, the hon. Lady, for giving way. She is making a very brave and powerful speech. I would like to put on the record my huge thanks and appreciation for all her work in the setting up of the all-party group, and for the group’s continuing work. Bereaved parents, all of us, want to ensure that our child’s life, however short, has meaning. The hon. Lady is absolutely doing that and, if she does not mind me saying so, I think Lucy would be very proud of her mummy today.
Mrs Hodgson

Thank you very much. I appreciate that the hon. Gentleman was trying to calm me down, but he has probably made me worse! As Members can all see, I feel very strongly about this issue, so I felt that, even though I knew I would end up in floods of tears, I had to come along and take part in this debate and express how strongly I want to support this legislative change, and why.

If Lucy had been born alive at 23 and a half weeks, she would have been incubated immediately and rushed in the waiting ambulance, with flashing blue lights, to the Royal Victoria Infirmary in Newcastle, where they have the regional centre of excellence for special care baby units for very premature babies. She would have had the very best world-class care. She would have had a birth certificate and she would have been celebrating her 20th birthday this year. But sadly she was stillborn, so there were no flashing blue lights, no incubator and no birthday parties, ever. And as I found out to my horror, there was no birth or death certificate. As I held her in my arms and had to come to terms with what had just happened, I also had to come to terms with the fact that, officially, she did not exist, and that I would not be getting any certificate of her arrival or death. She was three to four days short of the required 24-week legal age.

It is very clear that Lucy does exist. Lucy does exist in my hon. Friend’s memories. It is very important for so many constituents that the all-party group on baby loss and the hon. Member for East Worthing and Shoreham (Tim Loughton) are raising this issue today. My hon. Friend is very brave to be able to talk through her personal experience. As ever with the many issues that we cover in debates these days, it is important for people outside the House to understand that MPs share these experiences, as we share mental health issues and other forms of loss in our families. I congratulate my hon. Friend on her speech. The all-party group is doing a fantastic job of campaigning. I hope we can hear a little more from my hon. Friend because the issues she is covering are really valuable.

Thank you so much. I appreciate all the support that everyone is giving me to help me to get through this moment.

As I was saying, Lucy was three to four days short of the 24-week legal age required to be considered eligible for a death certificate. I was horrified and further traumatised when I then saw it entered in my records as a miscarriage. Because she was pre-24 weeks, she did not even get the dignity of being classed as a stillbirth, although that is what I always say she was, if and when I do talk about this tragedy—which is not very often, as Members can tell.​

We went on to have a lovely blessing, given by the amazing hospital chaplain in the private room to which I was moved after she was born. We named her Lucy during the blessing and spent a number of hours with her before she was taken to the chapel of rest. Twenty years ago, the Queen Elizabeth Hospital in Gateshead did not have any cold cots—I sincerely hope it does now; I will try to find out—so we could not spend the night with her, even though I was kept in overnight, heavily sedated.

We had a very small family funeral service. My children were two and three and a half at the time, so they were not even there, just our parents. The service was organised by the chaplain and the Co-Op, which funded and organised everything. That was such a touching thing to do, although I know that is not always the case—my hon. Friend the Member for Swansea East (Carolyn Harris) campaigns on that very topic, and I support her in that. Lucy was buried in a tiny white coffin in the same grave as my nana and granddad.

I tell the House all that to highlight that to the chaplain, to the Co-Op funeral service and to us, her family, she existed. She was a baby who sadly was born dead. Her heart was beating throughout my labour, up until just minutes before she was born. She just could not make the final push into this world. Because of that, and because of a matter of a few days, she does not officially exist in any records, other than in our memories and our family records. Even the entry on the deeds for the grave is my name, as if I, or in this case a bit of me, was buried there. Her name is not on the deed for the burial plot because although buried there, she did not exist. I hope that Members can appreciate and understand how hard this was to deal with and to understand at the time, when I was dealing with what was, and still is, the worst thing I have ever had to experience in all my life.

There must be a way to square the circle in cases such as this, with the whole 24-weeks viability argument. Babies born too soon and before 24 weeks now survive in much greater numbers than ever before. To my great delight, I have met some of them at events in Parliament and it is amazing—each one is a miracle. Surely there is a way to recognise the 22-week or 23-week babies who did not quite make it to their first breath. That is why I welcome wholeheartedly what the hon. Member for East Worthing and Shoreham is trying to do with this Bill. I hope that the Government will look favourably on it.