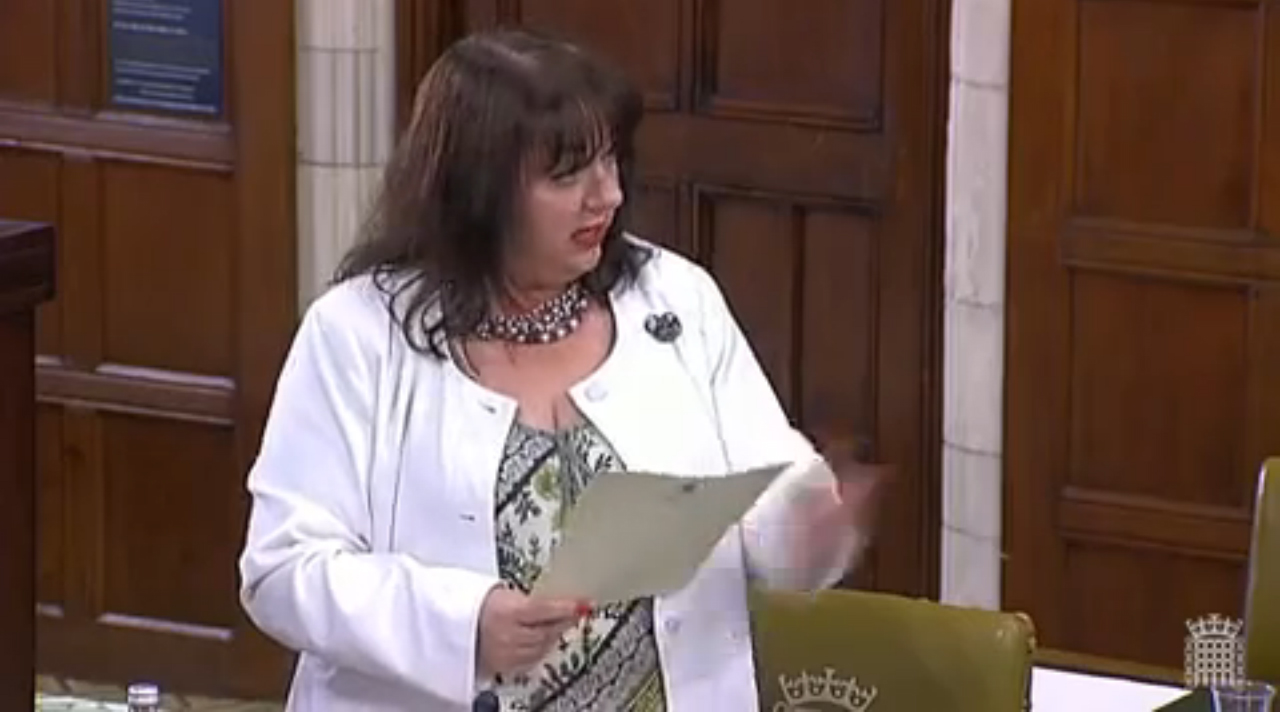 As Shadow Women and Equalities Minister, Sharon spoke on behalf of the frontbench on the health benefits of breastfeeding and how we must address the negative cultural attitudes around women breastfeeding their new-borns by calling on celebrities and TV producers to be more open to promoting breastfeeding, especially towards young mums.

Mrs Sharon Hodgson (Washington and Sunderland West) (Lab): Thank you very much, Mr Bone, for chairing this debate this afternoon. I also thank the hon. Member for Glasgow Central (Alison Thewliss) for securing this important debate, and other Members for their excellent contributions.

We need to keep our focus on this issue, and I am very pleased that all the Members who have spoken so far share my passion for extolling the virtues of breastfeeding. I am also pleased to note that the Minister present today is the Under-Secretary of State for Life Sciences, who I respect hugely. Although at first I thought it was rather strange that breastfeeding came under his brief, I am now sure that it is simply the case that the issue is so important to the Government, and crosses so many departmental boundaries, that they settled on him, and it was not just a case of Ministers perhaps playing “pass the parcel” with this important debate. As I say, I am very pleased to see that he is here to respond to it.

I will start my remarks by putting my cards firmly on the table—for me, wherever possible breast is best. I breastfed both my children, as all the Members who have spoken so far breastfed their children, and I am evangelical about the merits of breastfeeding.

As other Members have said, and shared, breastfeeding sometimes hurts at first—although not for everyone—and that is why the right support is vital, to help women and encourage them to carry on breastfeeding. Having someone physically there really makes the difference, especially when a woman has a baby like my son, who did not like to open his mouth very wide when latching on. If he could get away with it, he would just suck on the nipple until it was red raw, and obviously he then got no milk. If nobody had told me that that is not how it is supposed to happen, I would have given up immediately. Support is vital. As with my hon. Friend the Member for Dulwich and West Norwood (Helen Hayes), my second child—my daughter—could not tolerate cows’ milk. Fortunately, I was able to carry on feeding her to about 16 months, but feeding a toddler in public draws lots of frowns, and eventually I succumbed. We went on to soya milk, and even now she does not really like milk.

We have a fabulous support network in the north-east called Bosom Buddies, which helps, supports and encourages new mums as they get to grips with breastfeeding during the early days. The network provides much-needed guidance and advice for mothers who may otherwise be unsure about even starting to breastfeed. Those services are replicated in various parts of the country, and many are in Sure Start centres. I have had the great pleasure of visiting many breastfeeding support groups in those centres, and I have seen their great work. I would love every new mother across the UK to have access to such services, because that support makes a huge difference, as we have all attested today. Sadly, as we have seen across the country in recent years, Sure Start centres are closing. More than 700 have closed since 2010, which limits the amount of support that mothers can get. What assessment have the Government made of the number of support services that have been lost as a result of the closure of more than 700 Sure Start centres?

National Breastfeeding Week is a brilliant idea, and over the years it has successfully highlighted, across the world, the importance of breastfeeding. I fully endorse and support the campaign, and I hope this debate will go some way towards making even more people aware of the virtues of breastfeeding. As we have heard, numerous studies have shown breastfeeding to be the healthiest way to feed a baby. Not only does breastfeeding provide essential nutrients and sustenance, it also greatly reduces the risk of a baby developing health problems such as gastroenteritis, asthma, diabetes and obesity.  Furthermore, breastfeeding helps to protect women from breast and ovarian cancer. The World Health Organisation is unequivocal that, if possible, babies should be totally breastfed until they are at least six months old. On top of all that, there is the additional bonus that breast milk from source is always at the right temperature for babies, with no bottles needing to be sterilised.  Best of all, it is 100% free. Breastfeeding is cheap; it is good for babies; it comes highly recommended; and, by preventing illnesses, it keeps babies safe while saving millions of pounds from stretched NHS budgets. Put simply, what is not to like?

Unfortunately, despite all of the positives that other Members and I have outlined today, certain obstacles remain for mothers who are looking to breastfeed their children. One such obstacle comes when mothers return to work after maternity leave. Breastfeeding mothers face a heightened sense of anxiety when they return to work from maternity leave, as they have the additional worry of how their baby will be fed in their absence. The hon. Member for Glasgow Central and other hon. Members spoke of their personal experience. Women may have to raise with their employer the issues of expressing and storing breast milk and fitting in feeds around their work and lunch hour. If they harbour fears that their employer lacks an understanding of, or concern about, such accommodations, it may delay their return to work, or stop their return altogether. Alternatively, such fears may make women give up breastfeeding sooner than they had planned.

Maternity discrimination, such as prohibiting mothers from breastfeeding in cafés or restaurants, is now against the law under the Equality Act 2010, but the Act does not apply in the workplace. Mothers can be told not to express milk or be denied breastfeeding breaks. Employers do not have to provide facilities for breast milk to be expressed or stored. Good employers provide such facilities, but they do not have to do so. I can tell hon. Members, as the Health and Safety Executive already has, that toilets are no place for expressing milk or breastfeeding. We all want parents to get back to work if they wish to do so. I hope the Government understand that breastfeeding responsibilities are holding mothers back from returning to work, and I hope the Minister will assure us that he is looking into ways to address that issue.

Over the past few years, we have seen that women in general are finding it harder at work. There were more unemployed women over the past five years than at any time under the previous Labour Government, and real wages for women have fallen year on year since 2010. There has also been a dramatic fall in sexual discrimination and pregnancy discrimination cases made against employers since women were priced out of justice when expensive tribunal fees were introduced. Figures comparing the years before and after the introduction of those fees show a truly staggering 91% fall in sex discrimination cases and a 46% fall in pregnancy discrimination cases. Such dramatic falls are utterly unacceptable in a country that wants to treat women with respect in the workplace. A Labour Government would have scrapped those unfair barriers to justice. I would love to hear the Minister say that his Government will reverse that unfair policy.

Alongside the structural issues affecting breastfeeding, there is a growing cultural obstacle that prevents new mums from breastfeeding their children. It is particularly striking, as we have heard, in working-class communities. The Department for Health figures show that in Brighton almost 70% of new mothers were partially or totally breastfeeding at six to eight weeks—that is relatively early to be taking a measure, given that the recommendation is that children should be breastfed for up to six months, but we can use it as a comparison—while in Hartlepool and south Tyneside the figure falls to 19.3% and 22.6% respectively.

In some communities today, there seems to be an anti-breastfeeding culture among young mothers, which we need to challenge and reverse. National Breastfeeding Week and this debate are great ways of starting to do that. Breastfeeding must be seen as normal and natural, and new mothers should feel utterly comfortable doing it. We need to focus on the areas and communities in which new mums do not even consider starting to breastfeed because it seems so strange or even repulsive to them. Government support is required. Role models must come forward to extol the virtues of breastfeeding and we need more mums on TV—[Interruption.] Hon. Members may laugh. We need mums in our soaps and even on “The Only Way is Essex”, breastfeeding naturally and happily. We rarely see breastfeeding, and if we do it is usually by mums such as us—middle class, professional, older mums—which reinforces the image in some young mums’ minds that breastfeeding is something for a certain type of people, not for them and their friends.

We need to work to reverse that image and let new mums and young mums know that breastfeeding is not only good for their health and that of their babies, but it has immediate benefits, such as helping them lose their pregnancy weight much faster, as the hon. Member for Glasgow Central said. I was never as slim as when I was breastfeeding my children. If I could have carried on breastfeeding, I would, because the weight really drops off. It also means not having to get cold in the middle of the night making up bottles, and it helps mums to bond in such a special way with their babies, which cannot be imagined until it has been experienced.

Come on, TV producers, soap writers, celebrities and “TOWIE” stars watching this debate—get to it. Get breastfeeding on TV and get mums seeing it. I want mums to feel comfortable in public—even in Claridge’s, for goodness’ sake. We need to show that it is totally normal, natural and acceptable, and that those who have a problem with it simply need to get over it.

I once again thank the hon. Member for Glasgow Central for securing this important debate and for all she has said and done on this issue in the short time she has been in this House. I thank the other hon. Members for coming along and making their expert contributions. I have rarely heard such strong and powerful arguments for the benefits of breastfeeding and I thank every hon. Member who came to speak here today. I am sure that with such powerful advocacy from hon. Members and from groups and organisations throughout the country, National Breastfeeding Week will be a huge success in raising even greater awareness among parents.

I hope that the Government will listen to the concerns about women getting back into work after having a baby and will address the specific issues that affect them to ensure that that transition is best for both the mother and her baby. We all want to see the best outcomes for all parties, but only by taking action to help can we see progress. Simply hoping for the best will not be enough, so for the sake of babies, their mums and our society in general, let us hope for a successful awareness campaign and an equally successful response from the Government.