As the Shadow Minister for Public Health, Sharon Hodgson MP responded to a debate in Westminster Hall on the diagnosis and treatment of Ovarian Cancer. 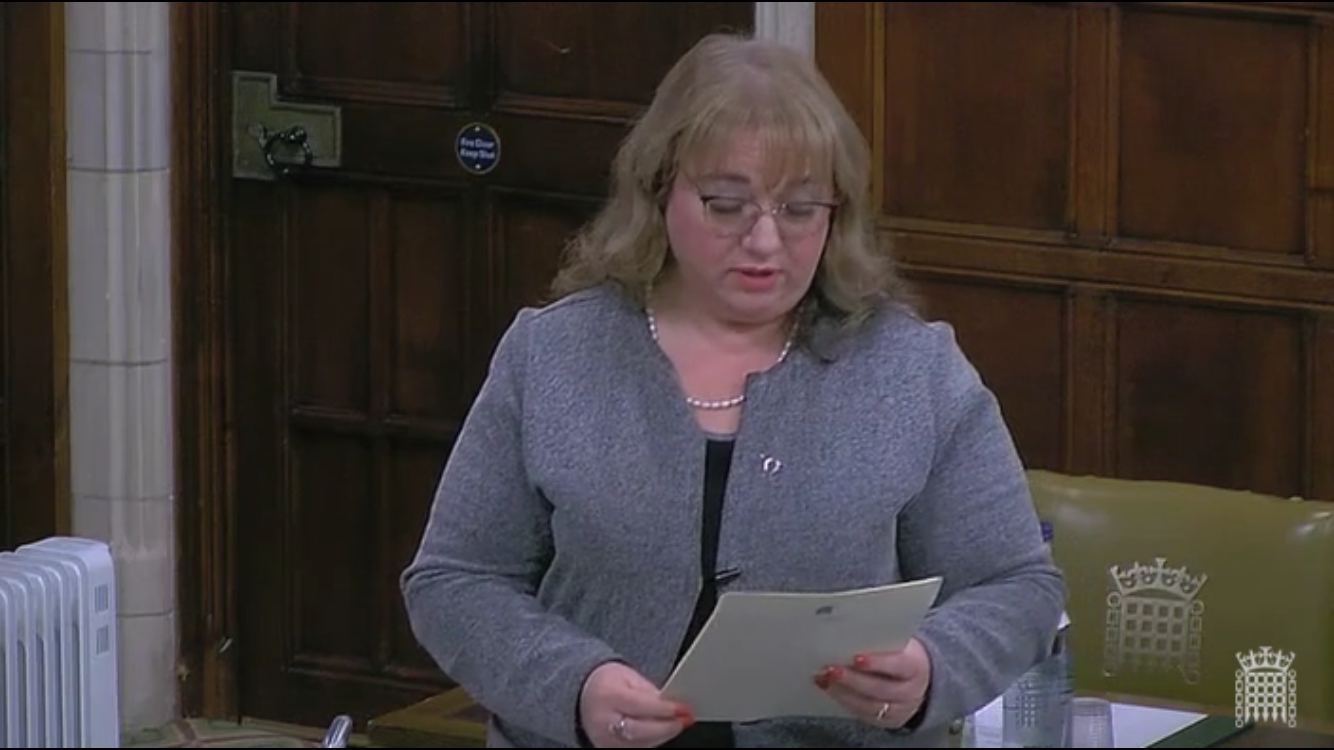 You can see a short clip on Twitter here

It is a pleasure to serve under your chairmanship, Mr Bone. I thank the hon. Member for North East Derbyshire (Lee Rowley) for securing this very important debate and for his vice- chairmanship of the all-party parliamentary group on ovarian cancer, which I am extremely proud to chair. We work very well together. Indeed, earlier this year he and I shared the chairing responsibilities for two oral evidence sessions as part of the preparation for publication of our report entitled “Diagnosing ovarian cancer sooner: what more can be done?” to mark World Ovarian Cancer Day 2018. I thank him for that also.

The hon. Gentleman made an excellent and extremely moving opening speech. He shared many examples of women’s lived experiences of this awful disease, including his own experience with his mum Linda. I have no doubt she will be proudly watching him lead this debate. We are all MPs—that’s for sure—but we are also real people with lived experiences and families. Sharing those personal experiences can improve the debate, as it has done today. I thank the hon. Members for Strangford (Jim Shannon), for Berwickshire, Roxburgh and Selkirk (John Lamont) and for Lanark and Hamilton East (Angela Crawley) for their contributions to this important debate. We have also had some excellent interventions.

Many of the key statistics around this awful disease have been covered so far in this excellent debate, but if something is worth saying once, it is worth saying twice. Over 7,000 women are diagnosed with ovarian cancer every day in the UK, but sadly survival rates are among the lowest in Europe. Less than half of women diagnosed with ovarian cancer survive five years or more. Tragically, 4,000 women in the UK die each year because of this awful disease. Although progress has been made in diagnosing and treating ovarian cancer, there is still much more to be done and I want to highlight some ways the Government can do that.

I was extremely grateful to the Minister for meeting with me recently to discuss the key recommendations from the APPG’s report, which I just mentioned, and I will raise some of them now. Diagnosis is one of the key ways that women with ovarian cancer are often let down. Many women report experiencing delays in diagnosis. An astonishingly high proportion, 45%, say that it took three months or even longer to receive a diagnosis after first approaching their GP with symptoms. As we have heard, symptom awareness is one of the key things we must address. It is most concerning because we know the significant impact early diagnosis can have on chances of survival. Nine in 10 women who receive an early diagnosis of ovarian cancer can survive for five years or more, compared with less than five in 100 women who are diagnosed at a very late stage.

I want to share a story, as a few hon. Members have. My constituent Gail wrote to me ahead of this debate telling me the experience of her younger sister, who has stage 3 ovarian cancer that has spread to her stomach lining. Although she is currently responding to treatment, it took a long time to get the diagnosis in the first place. At one point, she was being incorrectly treated for rheumatoid arthritis. That only changed when she developed blood clots in her legs, which led the hospital to look for cancer. We can only imagine the added distress that this kind of delay can cause in an already extremely difficult experience.

As a result of her sister’s diagnosis, Gail underwent genetic testing and discovered that she had the BRCA2 gene, which, as we know, gives her a high predisposition to ovarian and breast cancer. My constituent underwent elective surgery at the start of the year to remove her ovaries and fallopian tubes, and is awaiting the next step with regard to the breast cancer risk. This case shows how important it is that patients are diagnosed as soon as possible, not only for themselves, but for their family members who may have to undergo further testing.

On early diagnosis, will the Minister support a review of the referral pathway for ovarian cancer, particularly in relation to the introduction of the shortened pathway that we have seen in Scotland, so that, as the hon. Member for North East Derbyshire also requested, the CA125 blood tests and ultrasound tests can be done at the same time, rather than sequentially, as they are now? What steps has his Department taken to ensure that NICE guidelines, which say that women should be offered BRCA testing at diagnosis, are adhered to? Ovarian Cancer Action found that 30% of women are not being offered this testing. I know that the new multidisciplinary diagnostic centres will also help with early diagnosis, but they are currently in the pilot stage and limited to 10 sites. Will the Minister confirm whether there are plans for more centres, so that everyone can have access to those services regardless of where they live?

As we know, the four key symptoms of ovarian cancer are a bloated tummy, needing to urinate more often or urgently, experiencing tummy pain and always feeling full. Anyone newly experiencing those symptoms 12 times a month or more is advised to see their GP. However, awareness of these symptoms is worryingly low. According to Target Ovarian Cancer, just 20% of women can name bloating as a symptom and only 3% can name feeling full or loss of appetite. Awareness campaigns run by Public Health England have been shown to be highly effective. The one currently running focuses on blood in urine.

Considering that we know how important it is that those with ovarian cancer are diagnosed quickly, it would be helpful to know whether Public Health England has any plans to run a Be Clear on Cancer campaign that focuses on either ovarian cancer or a cluster of symptoms for a range of cancers, including ovarian.

I recently attended Ovarian Cancer Action’s research grant award ceremony, where I heard about some of the incredible work being funded across the UK. The innovation and determination of some of the projects is truly astonishing. One project—it is hard to describe, but I will give it a go anyway—had a huge number of examples of DNA that needed going through on an individual basis and labelling. Due to the sheer quantity of data that needed sifting, those in charge of the programme invented a Tinder-style app—I know it sounds unusual—that enabled people to quickly categorise the different examples of DNA by swiping left or right. That information was then fed back into the research team’s data, to build up a comprehensive body of data.

Another project that received funding was that of Dr Jonathan Krell and Dr James Flanagan of the Ovarian Cancer Action Research Centre. They are investigating how changes to our genes can play a big part in the risk of developing cancer, including assessing how feasible it would be to implement a new genetic testing model that identifies and supports families at risk of ovarian cancer because of an inherited BRCA1 or BRCA2 gene mutation. With that in mind, does the Minister’s Department have any plans to increase Government funding into medical research for the early detection, diagnosis and prevention of ovarian cancer?

Finally, I want to cover the issue of surgery. As the Minister knows, surgery for ovarian cancer is widely considered one of the biggest factors in survival rates. Surgery for ovarian cancer is extremely difficult. Someone I know well who had the surgery once described it to me as being like trying to remove a bunch of grapes, and if any of the grapes was punctured or broke that would cause huge internal damage by spreading the cancer. Although there are a number of surgical centres of excellence across the UK, there are many women who do not have access to them and are being operated on by general surgeons—no generalist will ever be as good as a specialist. Through no fault of their own, those women will have a lower chance of survival than those who receive the specialist surgery. What assurances can the Minister give that steps are being taken to ensure that all women with ovarian cancer have access to a specialist surgeon and that the regional variation can be brought to an end?

Before I conclude I want to pay tribute to some of the incredible organisations and campaigners that I have had the pleasure of working with on this issue over the years. They work tirelessly not only to combat the disease, but to provide support and comfort to those who have it. They include Ovarian Cancer Action, the Eve Appeal and Target Ovarian Cancer, which also does much to support the work of the APPG on ovarian cancer in its role as the secretariat to the group. I look forward to hearing from the Minister about the ways in which the Government can support the work of those great charities and campaigners, and support the thousands of women across the country who sadly suffer from this disease.