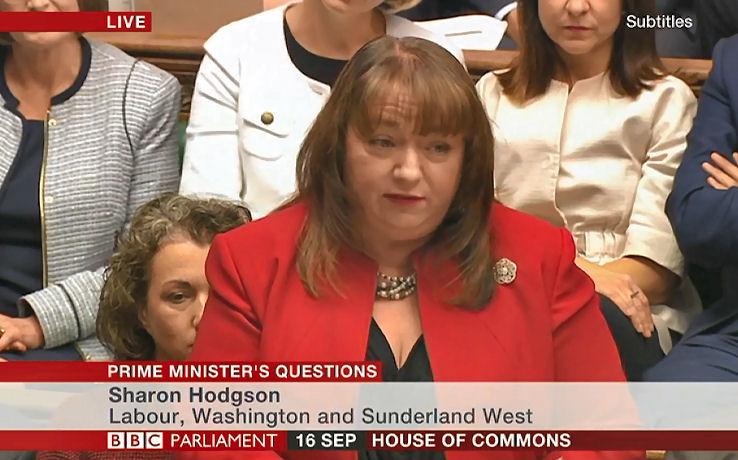 Today at Prime Minister's Questions, Sharon Hodgson, Labour MP for Washington and Sunderland West, highlighted the amazing success of the Nissan plant in Sunderland, and its recent record-breaking milestone of producing half a million new-model Qashqais in the fastest time ever in this country.

This news comes on the back of findings earlier this year that state that the North East now produces more cars than the whole of Italy.

Due to this continued success it was only right to mark it on the floor of the House of Commons.

Alongside the milestone, however, it was important to also question the Prime Minister on his Government’s recent legislation that is seeking to curtail the power of Trade Unions, and thereby weaken the rights of working people to stand up against injustice in the workplace.

Nissan are a fantastic example of a company that does not create division, but instead understands that the best way is for workers and managers to work together to produce the best results.

Today the level of industrial action is minuscule when compared to the 1970s, but these new rules are far harsher than anything devised under Margaret Thatcher’s Government and risk seriously undermining constructive industrial relations.

Sharon’s question to the Prime Minister was:

"Nissan in my constituency has just reached the half-a-million production mark for its new Qashqai model, breaking all UK records.  I am sure that the Prime Minister, and indeed the whole House, will wish to join me in congratulating Nissan on that great achievement.  Nissan’s constructive unionised workforce has helped achieve that fantastic outcome, so why is the Prime Minister attacking workers’ rights when in many cases, as at Nissan, trade unions are an overwhelming force for good?"

To which the Prime Minister replied:

"First, let me agree with the hon. Lady that the achievements at Nissan are absolutely remarkable.  One of the great privileges of my job is being able to go and meet people there and see what they are doing.  I think that I am right in saying that the north-east of England now produces more cars than the whole of Italy, which is something that I think we can be proud of.  Of course, with the new Hitachi factory we will now be manufacturing trains in the north-east as well.  Look, the Trade Union Bill is not what she says it is; it is to make sure that we do not have strikes based on very low turnouts.  Let me give her one example.  A couple of years ago we had school strikes that shut schools right across our country.  The ballot was two years out of date and only 27% of people had turned up to vote in it.  Working parents across the country had to keep their children at home when they should have been getting the public service they paid for.  That is what our Bill is about, and I hope that it will have support across the House."

After the exchange Sharon commented:

“I am glad the Prime Minister has met people in our great factories, but it’s clear from what he is doing that he hasn’t listened to what they have been saying.  Nissan are a fantastic company who work with employees and do not treat their rights with the disdain that this Government are subjecting workers to all around this country."

"Nobody wants to see strikes disrupt people’s lives, but the root cause of a strike is not the workers, it is the injustice that has caused them to take industrial action."

"Instead of working to address this, the Conservatives have reverted to their old tricks of clamping down on workers’ rights and pretending that they are doing it in the public interest."

"The brilliant achievements of Nissan deserve all the credit that they are getting, however it is this model of workers and management working together that we need to replicate around the country, not the Government’s divisive rhetoric which will only make things much worse.”