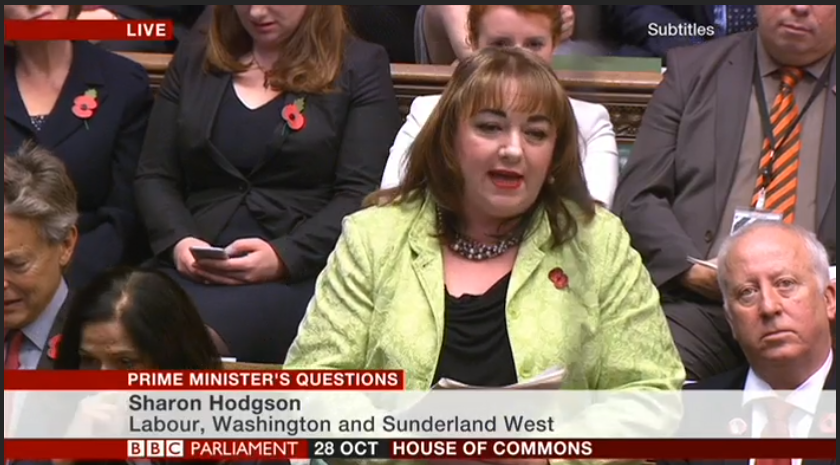 Prime Minister’s Questions, Mrs Sharon Hodgson, MP for Washington and Sunderland West and Chair of the All-Party Parliamentary Group for School Food, succeeded in getting the Prime Minister to commit at the Despatch Box to protect the future of universal infant free school meals (UIFSM).

During the exchange, Mrs Hodgson warned the Prime Minister that if he did not protect this policy in the Comprehensive Spending Review in November that he would “go down in history as Dave the Dinner Snatcher”.

In reaction to the answer from the Prime Minister, Mrs Hodgson said:

“It was welcome news that the Prime Minister has finally committed to protecting and continuing universal infant free school meals on the floor of the House of Commons.

“Yet I, and the many advocates for universal free school meals, will not rest until the ink has dried on the Comprehensive Spending Review in November and make sure that the Prime Minister sticks to his commitment to protect this important and positive policy”

Following her question, Mrs Hodgson received the support of large numbers of people who have advocated the improvement of food in schools and for universal free school meals, including Jamie Oliver, who began his campaign to improve school food back in 2005, said on Twitter:

“brilliant news such a relief and great news for child health and support to our cooks across the country onwards and upwards.”

Mrs Hodgson’s victory was the culmination of a campaign that was spearheaded by the school food sector and backed by the authors of the School Food Plan and owners of the LEON chain of restaurants, John Vincent and Henry Dimbleby, who recommended universal free school meals for all primary school children when funding could be found in the School Food Plan.

“David Cameron's confirmation of this excellent policy is great news for children's educational attainment and health, as well as for the economy.

“It is also an opportunity to congratulate all the school chefs and Head Teachers who have worked hard to make it happen.”

The campaigned focused around a petition on the Parliamentary petition’s website which called on the Government to protect universal infant free school meals from being cut, and if it reaches 100,000 signatures will be debated in the House of Commons. The petition currently stands at 40,355 signatures.  Sign the petition here: Save Universal Infant Free School Meals petition >

Q3. [901824] Mrs Sharon Hodgson (Washington and Sunderland West) (Lab): We all know about the Prime Minister’s broken promise on tax credits, but would not the final nail in the coffin of compassionate conservatism be hammered home if he were to scrap universal infant free school meals in the spending review, taking hot healthy meals out of the mouths of innocent, blameless infant children? Will he now guarantee not to scrap universal infant free school meals, so that he does not go down in history as Dave the Dinner Snatcher?