At Labour Party Conference, Sharon spoke at a fringe event hosted by the Northern Health Science Alliance (NHSA) and the Social Market Foundation (SMF) titled "How can we reduce regional health inequalities to create a healthier and wealthier Britain?" 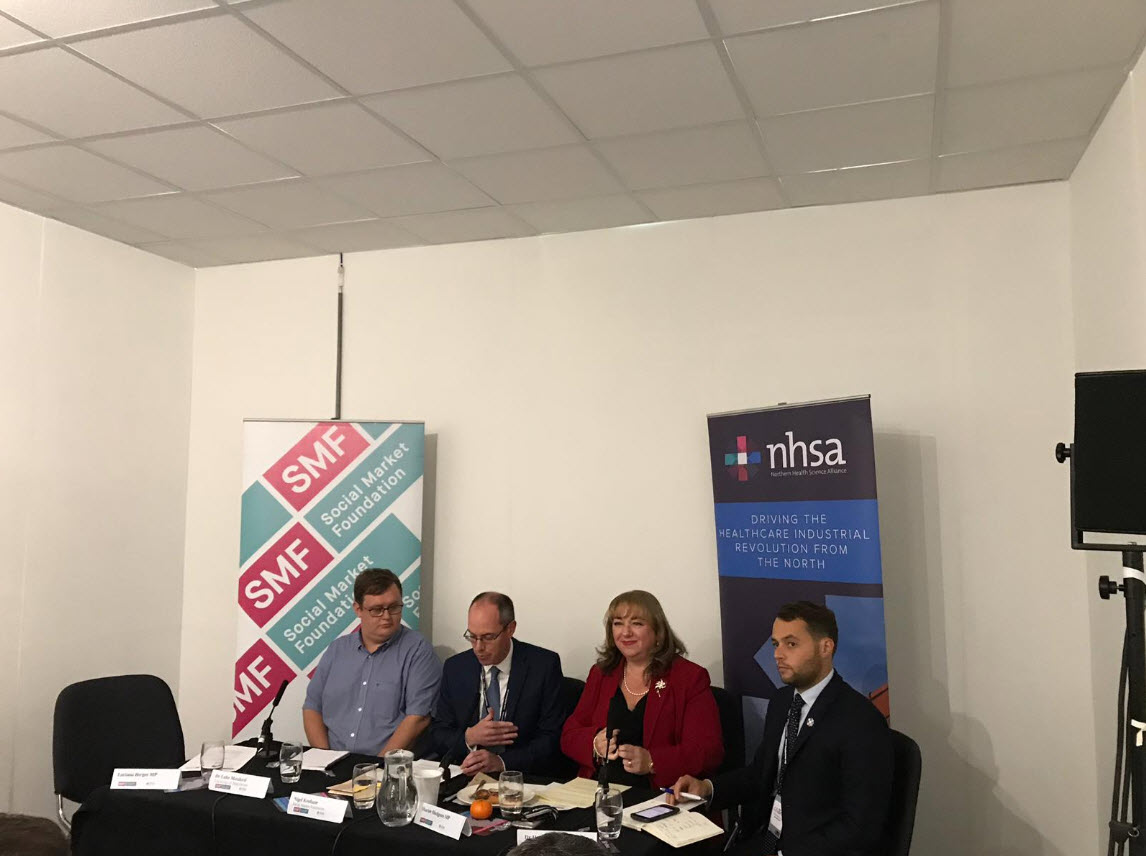 I hope that you have all been making the most of conference and have enjoyed your time here in Liverpool.

I’ve been in this role for two years now, and health inequalities – amongst other issues, of course – have taken up a lot of my focus.

For example, Kensington and Chelsea, which is the richest borough in the country, boasts the longest life expectancy in the country.

But the most disadvantaged people in Kensington and Chelsea can expect to live 14 years less than their more advantaged counterparts.

Even so a general pattern still emerges however between the North and the South overall and that is what I am talking about specifically today.

We all know that regional health inequalities exist, but when I met with Dr Hakim Yadi earlier this year and he showed me the health atlas I was taken aback by how stark the north / south divide was in terms of key life limiting conditions and diseases.

I don’t want to pre-empt anything that he may say when he speaks, but it really did bring into sharp focus, the realisation that people in the North are more likely to be unhealthy, and therefore die earlier, than people in the South.

Now, life expectancy in the UK has always gradually increased.

But for the first time in well over a century, the improvement in life expectancy began to stall in 2010, when a certain Mr Cameron walked into 10 Downing Street with a certain Mr Clegg!
Whilst Britain is being left behind and fast becoming “the sick man of Europe”, the Government will have cut public health funding by £200 million since 2015, and sitting back as if the issue will heal by itself.

Of course, it won’t.

In fact, the problem gets worse and worse the further North you go.

Research published in the British Medical Journal shows a 20% higher premature death rate for those living in the North across all age groups.

That is 1,173,360 Northerners dying earlier than if they had experienced the same life chances as those in the South over the last 50 years.

That is absolutely outrageous, and as Professor Iain Buchan (Buck-han) said:

“Five decades of death records tell a tale of two Englands, North and South, divided by resources and life expectancy.”

According to Buchan, there is currently a gap of two years between northern and southern life expectancy.

But when we look at the gap between specific regions, the story is much worse.

In the South East, the healthy life expectancy for men is 65.9 years and 66.6 years for women .

But up in the North East, where I represent, people can expect a much shorter healthy life expectancy.

That means that the inequality gap in healthy life expectancy at birth for the South East and North East is 6.2 years for men and 6.8 years for women.

If people in the North are more likely to be unhealthy and unwell before they even reach retirement age, then our productivity is significantly reduced through higher levels of absenteeism and unemployment.

The cycle of poor health and low productivity is therefore never ending, because high levels of absenteeism and unemployment means reduced earnings which can lead to poor health outcomes.

I know that the NHSA are undertaking research into this and will be launching its findings later this year. I will be really interested to look into those more closely as part of my work on this.

Recent research has shown that there is a positive link between the level of investment in health research and the health outcomes of that area.

But as we know, there is very little investment in the North.
The North has seen significant underinvestment from the public sector in clinical and healthcare research compared to other regions.

In the recent funding allocation from the National Institute of Healthcare Research Biomedical Research Centres, only 6.7% of the £816 million total funding went to the North, whereas 83% was secured by the Golden Triangle.

The phrase, follow the money has therefore never been more apt, as this shows the total imbalance, not just for funding but for health and outcomes.

Those in the South are more likely to be healthy and ‘easier’ patients because of all this research and funding.

That has to change.

A healthier workforce in the North will contribute to closing the productivity gap of 4% that exists between the North and South, and growing the region’s GDP rate to the UK average, could unlock 850,000 jobs by 2050.

Improved prosperity in the North will therefore drive further improvements in the region’s population and health.

The Government talk a lot about the Northern Powerhouse, but in reality, the North continues to be ignored.

If we are to tackle regional health inequalities, then what we need is investment in the North and our public health services need to be properly financed so that people can live healthier lives.

As the Shadow Minister for Public Health, I am committed to ensuring our health and care system is properly funded so that all children are given the best possible start in life, and older people are treated with the respect and dignity that they deserve, no matter where they live.

This today forms part of the discussion in how we go about doing just that, and I look forward to hearing everyone’s thoughts and ideas on this.