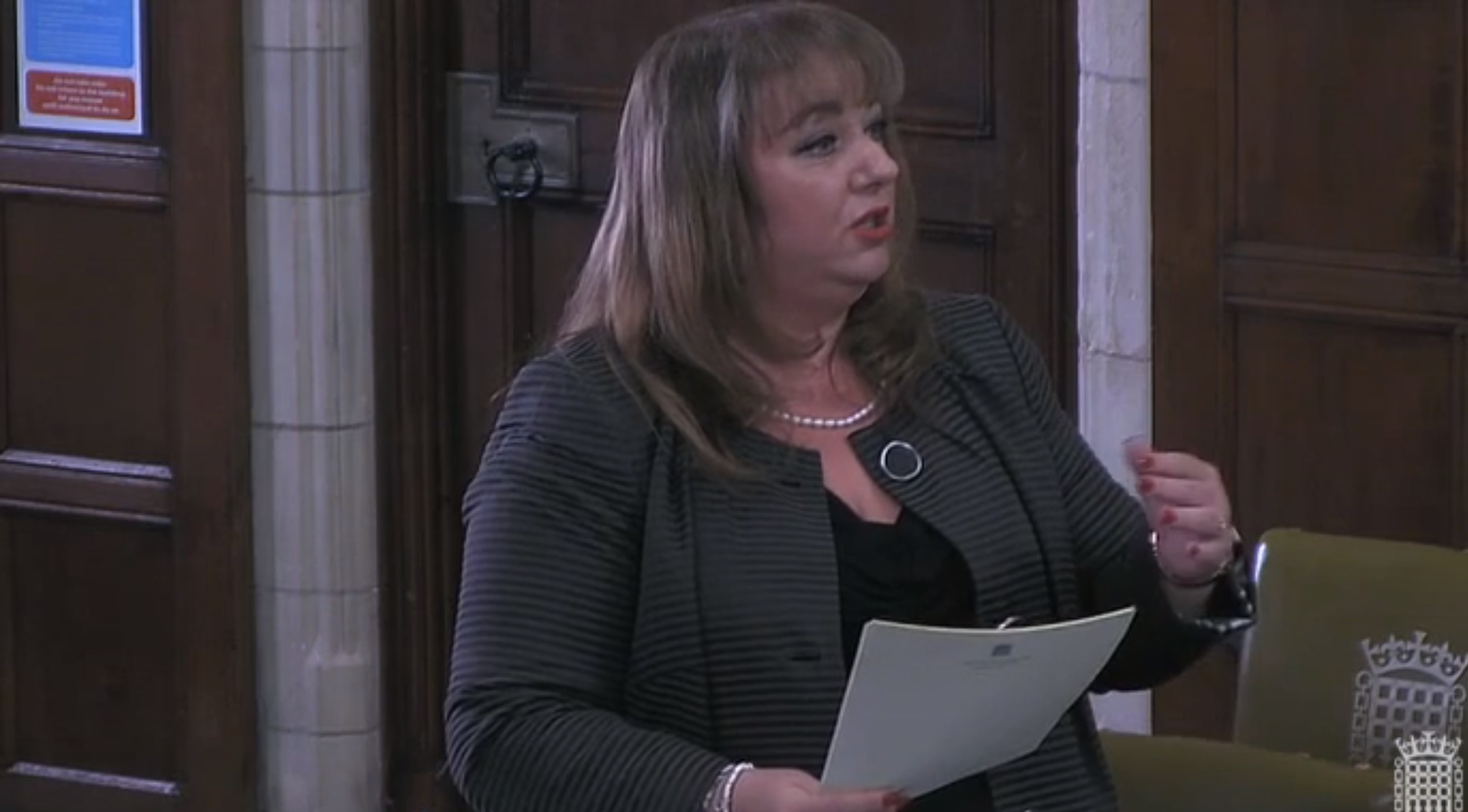 As Shadow Minister for Children, Sharon responded to a debate on teenage pregnancy in Westminster Hall, highlighting the important work done to reduce the under-18 conception rate, the multi-agency and co-operative work seen under the last Labour Government with their Teenage Pregnancy strategy between central and local government, and the need to improve sex and relationship education in our schools as part of statutory PSHE Education.

It is an honour, as ever, to serve under your chairmanship, Mr Chope. I thank the hon. Member for Telford (Lucy Allan) for securing this debate, which allows us to acknowledge the achievements made in addressing teenage pregnancy rates and to recognise that there is still a lot more to do, as she did so eloquently in her speech. I also want to acknowledge the excellent contributions of the hon. Members for Strangford (Jim Shannon) and for Glasgow Central (Alison Thewliss), who brought important perspectives from Northern Ireland and Scotland respectively.​

Research shows that 61% of children born to teenage mothers are at a higher risk of infant mortality and that, by the age of 30, teenage mothers are 22% more likely to be living in poverty than those who gave birth at the age of 24 or over. I know that that is not universal, but those are the statistics. The fact that 21% of women aged between 16 and 18 who are not in education, employment or training are teenage mothers shows that teenage pregnancy is not only a cause but a consequence of the educational and health inequalities in our society. That is why we cannot sit by and ignore this situation, especially given that we still lag behind western Europe on our teenage pregnancy rate. Although it was welcome news that England last month achieved the long-held target of a 50% reduction—it actually achieved 51%—in the under-18 conception rate between 1998 and 2014, this is no time to be complacent. We must ensure that the positive work that has been done does not go to waste and that the trends do not flatline or worsen.

Although the overall rate has gone down for England, there are still wide-ranging variations—not just between regions but within them. For example, my own local authority, Sunderland City Council, has seen a 45% drop in the conception rate. However, just down the road, Stockton-on-Tees, in the same region, has seen only a 29% decrease between 1998 and 2014. That trend is replicated in all regions, with varying gaps and differences in the conception rate. A lot of that can be put down to local variations and the way in which the 10-year strategy, which was introduced by the previous Labour Government in 1999, was implemented by local authorities.

The strategy was informed by international evidence. A 30-point plan was launched to halve the under-18 conception rate and to improve the life chances not only of the teenagers who fall pregnant but of their children. The plan laid solid foundations for reducing teenage pregnancy by ensuring effective multi-agency work. In 2005, the plan was reviewed when it became apparent that the initial measures were not being implemented across the board. Instead, more prescriptive guidance was introduced. That review of the strategy’s actions was best described by Alison Hadley in a recent article in the Journal of Family Health. She said that the review was an understanding “that high rates were not inevitable—even in deprived areas—if the right actions were put in place.”

That is the crux of the way that we should and must approach the issue of teenage pregnancy. It is not an inevitability of modern society, but it can be down to the inaction of those with the levers of power and their failure to implement the right interventions.

I thank my hon. Friend for giving way, and I congratulate the hon. Member for Telford (Lucy Allan) on securing this debate. I do not know how many in the House have the experience that I had, but I was a mum at the age of 16. I come from a deprived background. Does my hon. Friend agree that one of the most important things we can do is to ensure that people have the opportunity to break that cycle and enable them to go back to education or to bring their child up? That is one of the things that I found really depressing when I watched the ITV programme “Long Lost Family”. It is one of the heartfelt things that made me burst into tears. My son is with me; ​I was able to raise him as a teenage mum because of the intervention and support that I got as a mum. Does my hon. Friend agree that it is vitally important that we do that?

I do, and I commend my hon. Friend for raising that matter. She talked about it in her maiden speech so movingly for those who were in the Chamber or who listened to it afterwards. It brings important insight into this House in debates such as this to hear someone speak from experience. She is right that we need to support teenage mums. This is not about stigmatising them. Obviously, sometimes it is about helping them to make different choices if they do not want to make a particular choice. We must support them and ensure that the statistics I just mentioned, which we are all aware of, do not become the reality for young mums and their children. My hon. Friend has obviously broken that cycle: she is here as a Member of Parliament. The cycle of deprivation does not have to be inevitable. As I said, it is not universal, but the statistics are not where we would like them to be. There are obviously exceptions that prove the rule.

In 2010, the Department for Education set out a bonfire of policies that saw specific budgets directed at local councils, such as for addressing teenage pregnancy, rolled into the early intervention grant, which has sadly been repeatedly cut year on year and is a shell of what it used to be. The Government have failed to build on the work set out by the last Labour Government, thereby threatening the success seen to date with their short-sighted strategy on early intervention.

Instead of the Government seeing local authorities as a problem, rather than a solution, we need a renewal of the thinking that we had between 1997 and 2010, which harnessed the co-operative relationship between local and central Government to address issues such as teenage pregnancy effectively. For instance, one of the key measures that followed through in both the initial strategy and the updated version, as the hon. Member for Telford discussed in her opening speech, was the necessity to improve sex and relationship education in our schools.

No one will be surprised to hear that I am a passionate advocate of age-appropriate sex and relationship education. I understand the real benefits that equipping children with the right knowledge and tools will have on their futures as they become adults. However, it is not just me who believes that; it is the young people themselves. As the Sex Education Forum found in a survey of more than 2,000 young people earlier this year on the sex and relationship education that they receive, one in five was reported as saying that it was bad or very bad, which is deeply concerning when young people still say that they are embarrassed to seek advice about sex or relationship issues and half of 15-year-olds do not know about the existence of local contraception and sexual health services in their area.

Many opponents of age-appropriate sex and relationship education say that it is the job of parents, not teachers, to teach their children about sex and relationships, which shows just how out of touch many people are with the lives of children and young people. The Sex Education Forum reports that 7% of 15-year-old boys and 9% of 15-year-old girls have no trusted adult in their life to whom they can go when they need advice on sex and relationships. Some of them are children in ​care, about whom hon. Members spoke in the earlier debate. It is for that very reason that I and other Labour Members support the introduction of age-appropriate SRE as part of statutory personal, social, health and economic education, and many Government Members are slowly coming round to that idea, too. The lack of sex and relationship education in our schools is a ticking time bomb that the Government must address, especially with their impending forced academisation of all schools, which will bring into question the survival of SRE in any form in our schools.

I am interested to hear some of the points that the hon. Lady has made so far. Does she agree that it is important that schools buy into any duties? It is important that we have SRE and that its delivery does not become like the requirement to hold an act of religious worship in the morning. It is nice that that is statutory, but it is far more honoured in its breach than in its observance.

The ticking time bomb is paired with the increasing sexualisation of young people, with recent freedom of information requests to local police forces showing that reported incidents of children sexting has skyrocketed by more than 1,200% in the past two years due to increased access to social media such as Twitter and Facebook, and even to dating apps such as Tinder, which is why it is welcome that the Women and Equalities Committee has announced today an investigation into sexting as part of its inquiry on sexual harassment among pupils in schools. I look forward to seeing what comes out of that inquiry.

It is high time that the Government took action and issued an update of the sex and relationship education guidance, which was published before the smartphone generation was even born. I hope the Minister can update Members on the DFE’s plans. I will not hold my breath, however, as when the opportunity came for the Government to take bold steps in introducing statutory PSHE and age-appropriate SRE following the most recent report of the Select Committee on Education on this area, it was blocked by no less than the Prime Minister. That was despite it being reported that many women Cabinet Ministers, including the Education Secretary herself, were strongly in favour of introducing this measure and were dismayed at the Prime Minister’s inaction.

Not only disgruntled Cabinet Ministers but the Children’s Commissioner, the Chief Medical Officer, the National Society for the Prevention of Cruelty to Children, 88% of teachers, 90% of parents and 92% of young people themselves are in favour of introducing both subjects to the curriculum as statutory subjects. Yet again, the Prime Minister is putting himself on the wrong side of the issue when it comes to teaching our young people about life and the resilience to deal with what is thrown at them.​

In conclusion, it is undeniable that we have made great strides forward on teenage pregnancy and those achievements must be celebrated, but there is still a long way to go. The Government must make clear their vision about how they will build on the important multi-agency, co-operative intervention work of the last Labour Government, and about how they will finally bring forward plans for PSHE and SRE that will make them effective tools in the young person’s arsenal and enable them to make informed choices in their lives.