Sharon has extended her attack on the Government’s bedroom tax at Prime Minister’s Questions today. 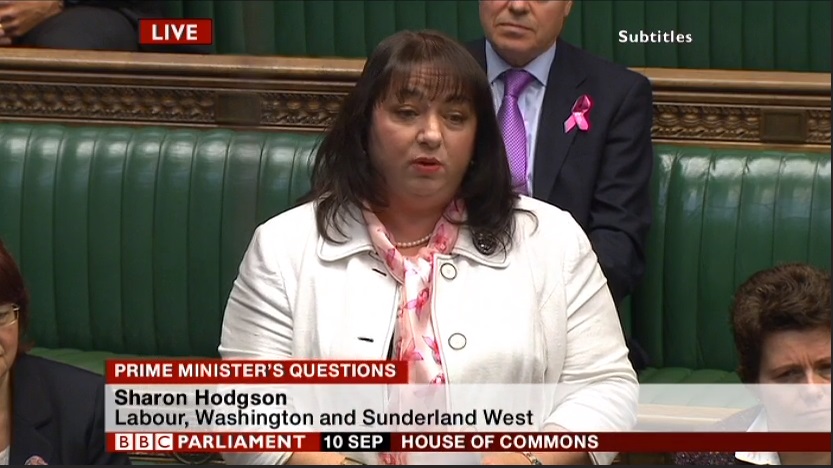 Sharon was drawn to ask the first question at the first Prime Minister’s Questions session after the Government suffered a humiliating defeat in the House of Commons over the policy, with a proposed change to the law which would water it down being passed by 306 votes to 231.

Following her speech in the debate before last Friday’s vote, Sharon used the opportunity of appearing first in the proceedings to brand the policy “discriminatory” and “damaging”, before challenging William Hague, who was standing in for the Prime Minister, to scrap the policy completely.

Speaking after the session Sharon said: “The House of Commons sent a strong message to the Government last week that the Bedroom Tax needs to go. They can’t continue to ignore the views of MPs and the constituents they are sent to Parliament to represent.

“If they won’t scrap this hated tax – which it looks like they won’t – then a future Labour government will.”

The Bedroom Tax is estimated to cost almost 37,000 of the poorest households across the North East around £700 a year, with many of those affected suffering from disabilities.

Sharon's full exchange with William Hague was as follows:

Mrs Sharon Hodgson (Washington and Sunderland West) (Lab): If he will list his official engagements for Wednesday 10 September.

The First Secretary of State and Leader of the House of Commons (Mr William Hague): I have been asked to reply on behalf of my right hon. Friend the Prime Minister, who is with the Deputy Prime Minister and the Leader of the Opposition in Scotland today to listen and talk to voters about the huge choice they face. Their message to the Scottish people is simple: from the people of England, Wales and Northern Ireland, we want you to stay in the United Kingdom.

I join the Prime Minister in the tribute he paid on Monday to Jim Dobbin who died at the weekend. He was a proud Scot, and a hard-working and principled parliamentarian who was respected on both sides of the House. He will be very sadly missed, and I know that the thoughts of the whole House are with his family and friends.

This morning I had meetings with ministerial colleagues and others, and in addition to my duties in this House I shall have further such meetings later today.

Mrs Hodgson: I join the Leader of the House in paying tribute to our very good friend Jim Dobbin. He was a kind and thoroughly decent man and will be sorely missed. Our thoughts and prayers are with his wife Pat and their family.

The bedroom tax is discriminatory, damaging, and it is not even working. Last Friday the House was very clear. Will the Government now listen? Will they scrap that wretched policy, because if they will not, we will?

Mr Hague: This is a basic issue of fairness. For someone who lived in private rented accommodation and received housing benefit, these rules applied throughout the whole of the last Labour Government, and we had a situation in which neighbouring households could be treated unequally. The hon. Lady asked about the private Member’s Bill. The proposals in that Bill could cost the country up to £1 billion. Because we have introduced a cap on overall spending, making those changes would mean finding savings elsewhere. I have not heard any suggestions on that from the Labour party.