Sharon Hodgson, Member of Parliament for Washington and Sunderland West and Shadow Minister for Public Health has finally received a response to her letter to the Prime Minister, sent 6th February 2019.

Richard Harrington MP, Minister for Business and Industry, replied on 22nd February 2019.  A copy of that letter can be viewed here: 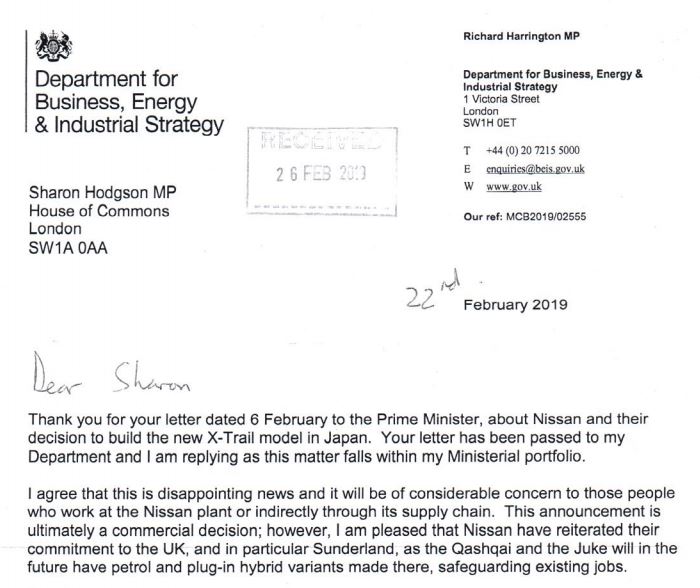 Unfortunately the Minister is unable to provide any further information regarding what our trading arrangements will be when we leave the European Union (EU) and refused to rule out a ‘No-Deal’ Brexit, which would be hugely damaging.

There are just 29 days until we are due to leave the EU, and businesses such as Nissan still have no clarity about what customs arrangements will be in place the day after.

In the letter, the Minister urges Sharon to vote for the Prime Minister’s Brexit deal, but we still don’t know what exactly that will be when it comes back to Parliament. It’s been 95 days – more than three months – since the Withdrawal Agreement and Political Declaration were agreed and thus far no changes have been agreed with the EU.

‘’It is hugely concerning that a Government Minister is unable to provide any more clarity on what our trading arrangements will be once we have left the EU in just 29 days’ time.

Businesses such as Nissan are absolute desperate for some certainty over Brexit, and the Government’s ongoing inability to provide it is hugely damaging.

Although there is also no confirmation that ‘No-Deal’ will be taken off the table in this letter, I am glad that Parliament will now have the chance to vote against it. The Government should urgently confirm that when that vote happens, they will be voting against leaving the EU without a deal, which would be disastrous for the country and our region.’’

TinyUrl link to this page: https://tinyurl.com/yyvaxdzo

Go back to top of this page >